Unveiled a text of joint statement on outcomes of fourth trilateral meeting of Azerbaijani, Turkish and Turkmen FMs 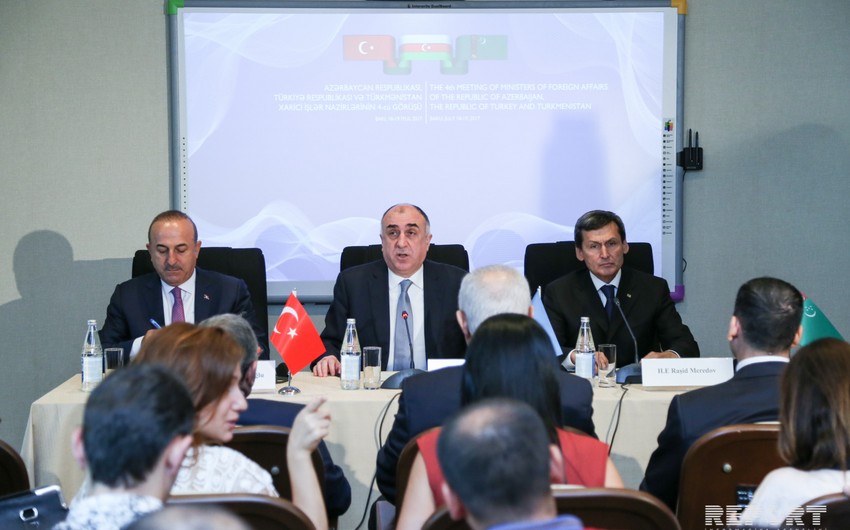 Affirmed their adherence to the joint statements adopted in the Trilateral Meetings of the Ministers of Foreign Affairs on 26 May 2014in Baku, on 29 January 2015 in Ashgabat and on 28 August 2015 in Antalya, and underlined the importance of joint efforts for implementation of the “Framework Program of Azerbaijan-Turkmenistan-Turkey cooperation for 2015-2017”.

Reaffirmed their mutual respect and firm support for sovereignty, territorial integrity and inviolability of internationally recognized borders of States.

In this context, stressed the necessity for earliest resolution of the conflicts, on the basis of adherence to the principles of sovereignty, territorial integrity and inviolability of internationally recognized borders;

Underlined the importance of further strengthening of cooperation in the fight against terrorism, separatism, extremism and discrimination in all their forms and manifestations, transnational organized crime and illicit trafficking in narcotic drugs and their precursors, and arms, human trafficking, crimes against cultural and historical heritage, cybercrimes and illegal migration.

Especially noted utmost importance of the trilateral meeting of the Presidents of the Republic of Azerbaijan, Republic of Turkey and Turkmenistan during the Fourth Summit of the Cooperation Council of Turkic Speaking States in Bodrum on 5 June 2014, and underlined the importance of the forthcoming Trilateral Summit of the Heads of States in Turkmenistan.

Noted the importance of strengthening trilateral economic cooperation, as well as the legal basis for economic partnership among the States.

Agreed to support the further development of cooperation through strengthening of the trade-economic cooperation, using existing potential for promotion of investment and trade as well as carrying out joint projects and programmes in the field of customs, energy, transport, telecommunications, industry, agriculture, science, education, culture, tourism, and environment.

Agreed to consider the opportunities for organizing Azerbaijan-Turkey-Turkmenistan Business Forum during the forthcoming Trilateral Summit of the Heads of States in Turkmenistan.

Noted the importance of continuation of the existing cooperation between small and medium sized enterprises of all three countries.

Underscored the necessity of further strengthening the cooperation for realization of new projects on development of transport infrastructure and increasing the transit potential.

In this context, noted the significance of the first trilateral meeting of the Ministers of Transport held on 1 September 2016 in the city of Ashgabat, where wide range of issues on transport - transit corridors connecting three countries were discussed.

Exchanged views on the prospects of development of the East-West International transport corridor, linking Turkmenistan with the Republic of Azerbaijan across the Caspian Sea and accessing Europe through Turkey (Baku-Tbilisi-Kars railway) and underlined that this corridor will contribute to the efforts of the States aimed at restoration of the Great Silk Road.

Noting importance of Afghanistan-Turkmenistan-Azerbaijan-Georgia-Turkeytransport corridor project, declared that this route will continue to receive necessary support.

Highly appreciating importance of Trans Caspian part of the Trans-Eurasian Information Super Highway (TASIM) project aimed at strengthening of sustainable cooperation by creation of information (internet) infrastructure for establishment of regional digital information society, as well as serving to diversification and modernization of telecommunication transits between the Europe and Asia, the Parties agreed to support the project by encouraging the participation of public and private sectors.

Taking into account the significance of cooperation in the field of energy, noted the utmost importance of delivery of Turkmen and Azerbaijani natural gas to European and other internationalmarkets through Azerbaijan and Turkey.

Emphasized the necessity to develop further cooperation in education, science, culture and other humanitarian fieldsbased on common cultural, linguistic and historical heritage of Azerbaijani, Turkish and Turkmen peoples.

Underscored the importance of summits of heads of Turkic speaking states and bilateral as well as multilateral contacts in order to increase effectiveness of cooperation among them.

Noted the importance of cooperation within the Economic Cooperation Organization and emphasized the mutual support on the matters of common interest.

Noted that the year of 2017 is announced the Year of Islamic Solidarity in Republic of Azerbaijan and in this context, underlined importance of the 4th Islamic Solidarity Games, held in Baku, organised on high level that significantly contributed to promotion of Islamic culture and moral values over the World.

Expressed their further support for successfully holding of the 5th Asian Indoor and Martial Arts Games to be organized in Ashgabat in September 2017.

Noted the progress onthe drafts of trilateral documents in the field of energy, transport, economy, trade, customs, science, education and culture which are considered to be signedduring the upcoming Summit to be held in Turkmenistan.

Underscored the importance of holding regular trilateral meetings with a view to continue cooperation and coordination on political dialogue, regional and global issues.

Agreed to hold the next meeting in Turkmenistan. The date of the meeting will be agreed through diplomatic channels."