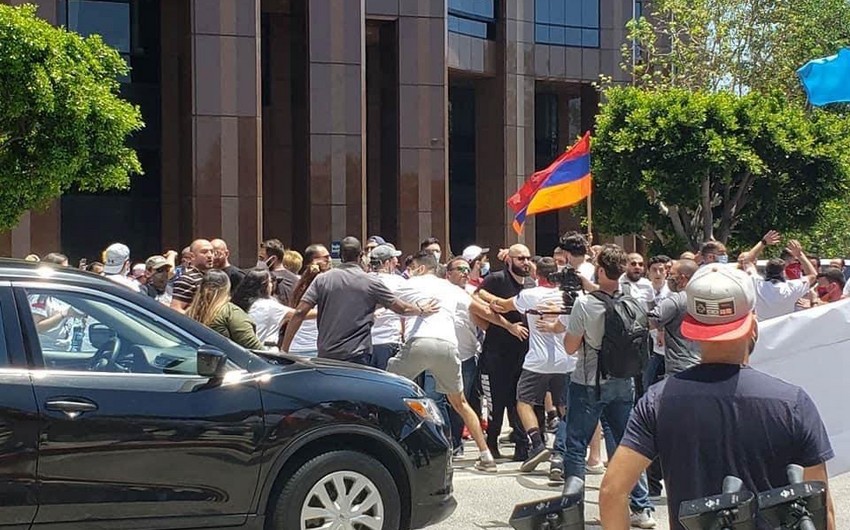 Authorities Thursday morning announced that three reported assaults during a massive demonstration staged by an Armenian group near the Azerbaijani Consulate in Brentwood are being investigated as hate crimes.

Fistfights broke out, and one officer injured during Tuesday’s demonstration in the 11700 blocks of Wilshire Boulevard, and the violence spilled into surrounding streets.

Officers set up a scrimmage line to keep demonstrators out of the streets, said Los Angeles Police Department Officer Mike Lopez, adding one officer suffered a laceration and was taken to a hospital for treatment.

Lopez said one person arrested on suspicion of assault on a police officer.

Three Azerbaijani victims reported assaults to police, which are being investigated as hate crimes. According to a statement from the department, the victims sustained non-life-threatening injuries during the altercation and received medical treatment at a hospital.

On July 16, the Azerbaijan Minister of Foreign Affairs said: “The only cause of tension in the region is Armenia, which holds Nagorno-Karabakh and seven surrounding regions of Azerbaijan under military occupation. Violates the fundamental rights and freedoms of hundreds of thousands of Azerbaijanis and directly impedes the settlement of the conflict through negotiations.”