State Duma Chairman invites Milli Majlis’s Speaker to visit to Russia Volodin: Work on creation of high-level inter-parliamentary Commission between the State Duma and Milli Majlis is at the stage of completion 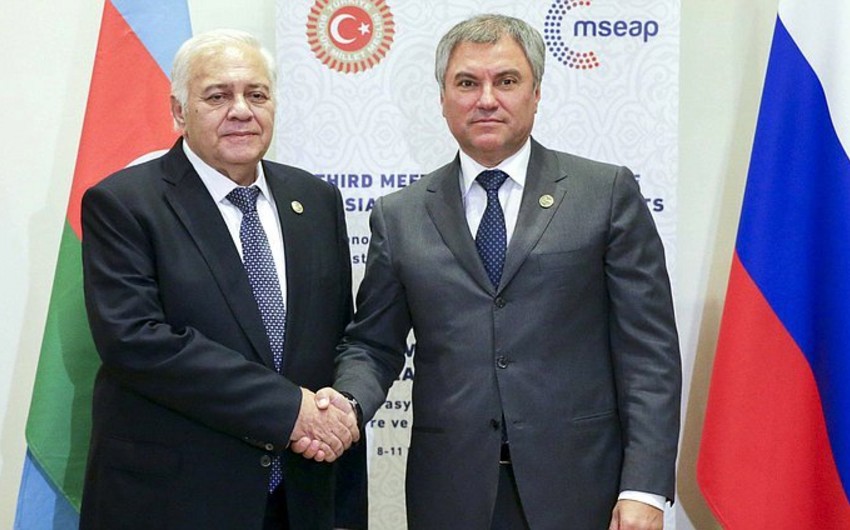 Baku. 9 October. REPORT.AZ / Chairman of the Azerbaijani Parliament Ogtay Asadov held a meeting with Chairman of the Russian State Duma Vyacheslav Volodin in Antalya on October 9 on the sidelines of the third meeting of Eurasian parliaments speakers. Report informs citing the State Duma that the talks focused on the agenda of the meeting of Speakers of Eurasian countries, including economic cooperation, ecology and sustainable development of the region, as well as issues of inter-parliamentary cooperation and bilateral relations between Azerbaijan and Russia.

Ogtay Asadov called for a more active development of inter-parliamentary relations between Azerbaijan and Russia. He also stressed that the trade turnover between the countries reached $ 1.5 billion in the seven months of 2018.

"We have the highest political and economic relations with Russia, and we appreciate them," Asadov said.

Notably, the agreement on the establishment of this Commission was reached during the first official visit of Vyacheslav Volodin to Baku.