Russian Ambassador: We highly appreciate what Azerbaijan has done at UN - INTERVIEW 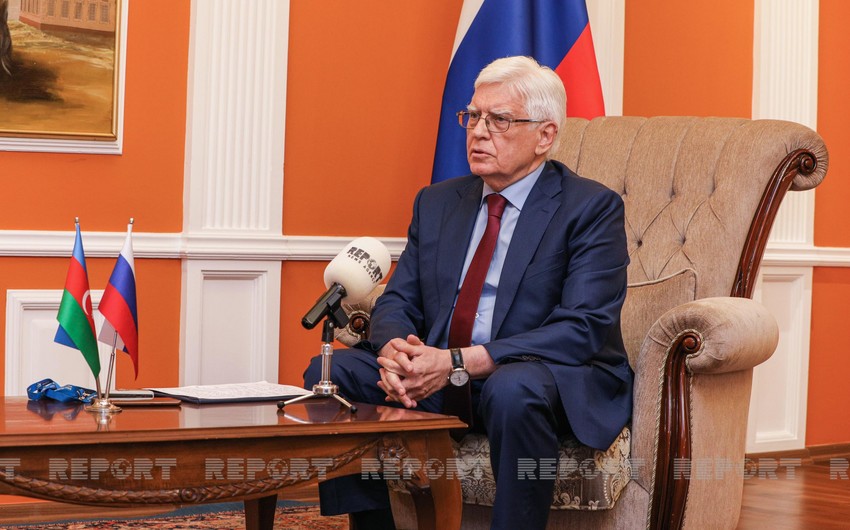 - How did the relations between Azerbaijan and Russia develop over the previous year, which was quite tricky for the whole world?

- Despite the limitations posed by the coronavirus pandemic, our relationship continued to develop intensively. First, political ties are at a very high level. Close contacts, communication between our presidents continue, which took place many times during the period you mentioned. In addition, economic ties are developing. Last year, our turnover dropped slightly due to pandemic restrictions, but now there is hope for its growth, and the figures for the first quarter of this year are encouraging.

During the year, many important events took place in terms of high-level contacts. In May, Prime Minister Ali Idayatovich Asadov was in Moscow on an official visit, the Chairperson of the Milli Majlis, Mrs. Sahiba Gafarova, visited Russia in April at the CIS IPA, where she talked with the Chairman of the Russian Federation Council, Valentina Matvienko. Russian Deputy Prime Minister Alexei Overchuk visited Baku twice, in January and April. Azerbaijani Foreign Minister Jeyhun Bayramov was in Moscow to participate in a meeting of the Council of Foreign Ministers of the CIS countries and met separately with Minister Lavrov. Foreign Minister Sergey Lavrov paid a visit to Baku in May.

I would also note the 19th meeting of our Intergovernmental Commission on Economic Cooperation held in May. All this taken together shows that there has been no failure in the development of bilateral cooperation over the indicated period, and we are successfully overcoming all difficulties.

- If we talk about the long term, what areas will be the priority in the relations between the two countries?

- As for the future, we also have something to talk about. In April next year, it will be 30 years since the establishment of diplomatic relations between our countries. And within this date, it is planned to hold several very different events. It is too early to say more concretely: the schedule has not yet been approved, but there is a clear intention to mark this date.

The Interregional Forum, which was previously postponed due to the pandemic, should be held in a less distant future. We look forward to holding this forum this year.

It is also essential to pay attention to economic ties, and here the decisions of the Intergovernmental Commission on Economic Cooperation, which was convened in Moscow in May, are indicative. As a result of the meeting, a very voluminous protocol was adopted, reflecting the most diverse areas of our activities.

If we talk about the future, then it is necessary to recall the Action Plan for the development of key areas of cooperation, which was adopted in 2018 and covers the period until 2024. The last meeting of the Intergovernmental Commission just confirmed the importance of implementing this plan with its additions. Interestingly, if earlier our plan consisted of five roadmaps, recently a sixth map has been added to them - on innovative development and the digital economy. The final protocol of the meeting of the Intergovernmental Commission reflects the work in all these areas. The main ones among them are well-known areas of cooperation: transport, industry, agriculture. But there are also new elements added to our tasks that will work for the future. In particular, in agriculture. Both sides intend to give a new impetus to cooperation in this area. The task was set to create favorable conditions for increasing the volume and expanding the range of mutual supplies of agricultural products and food. These headings continue to play an essential role in our trade relations. 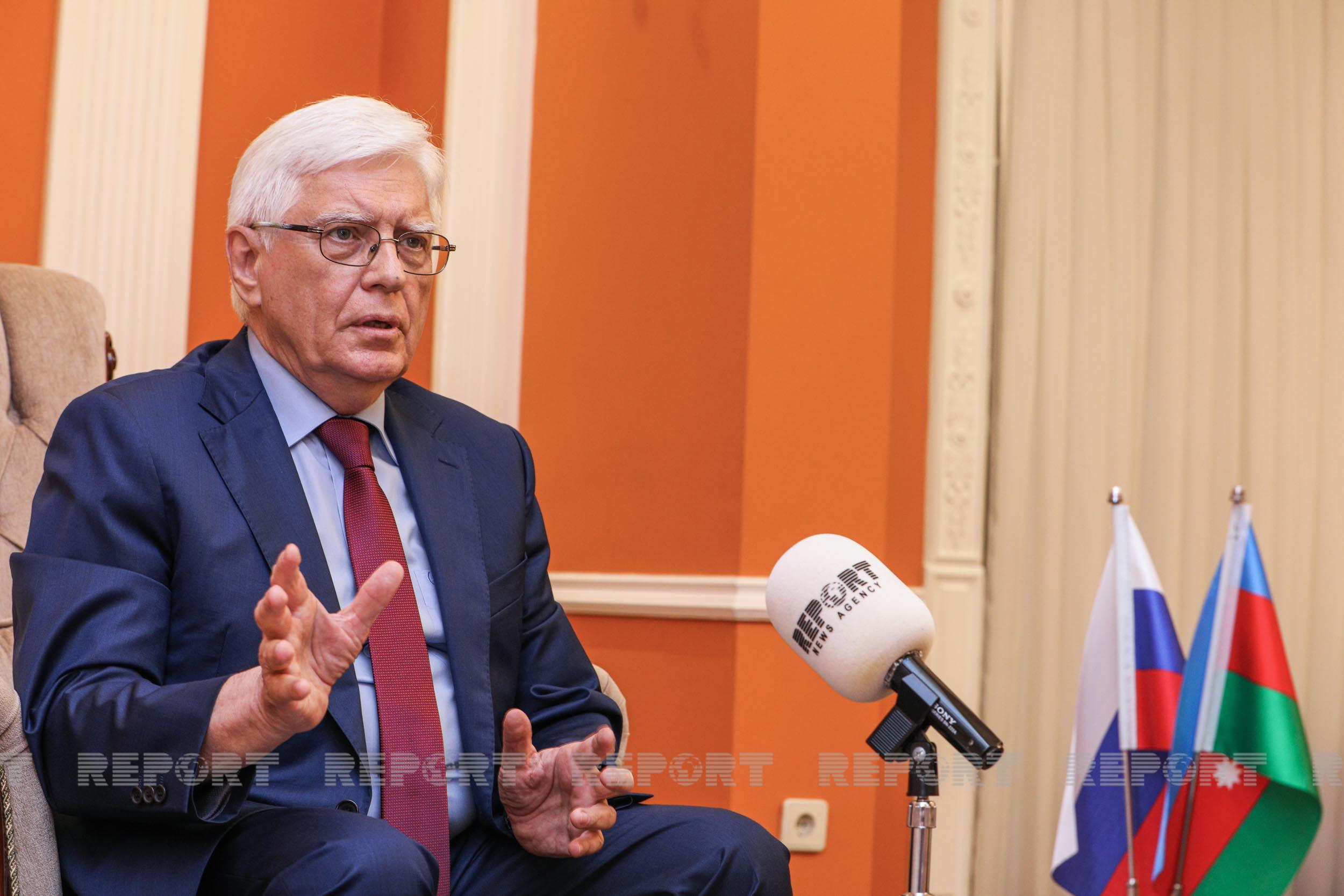 The action plan is overgrown with other new elements, which show that we are keeping pace with the times. It reflects such points as cooperation in intellectual property and the exchange of experience in the field of ICT. These are new issues, and, by the way, Prime Minister Ali Asadov discussed them with Russian Prime Minister Mikhail Mishustin during his visit to Moscow.

This is how I would describe the near-term development of our relations.

- How do you assess the cooperation between Azerbaijan and Russia in the fight against coronavirus infection?

- Our willingness to cooperate was confirmed with the onset of the pandemic. It was on the initiative of Azerbaijan, as the chairing country of the Non-Aligned Movement, that a special session of the UN General Assembly on the fight against coronavirus was held at the end of last year. Russia supported this initiative from the very beginning, we cooperated during the session and still highly appreciate what Azerbaijan has done in the UN to mobilize the world community.

Secondly, I would note that our countries demonstrated similar views on this issue in all kinds of forums, in particular, in the CIS forums, where this topic has been constantly on the agenda recently, where joint decisions are made on the coordination of our actions and unification efforts to combat this disease.

During all the meetings that I mentioned above, combating coronavirus remains one of the important items on our agenda.

- Do you expect deliveries of the next batch of Sputnik-V vaccine to Azerbaijan?

- There are corresponding agreements between the Russian Direct Investment Fund and the Azerbaijan Association TEBIB. On May 2, Azerbaijan received the first batch of 40,000 doses of the Russian Sputnik-V vaccine. We have just been informed about the next delivery. 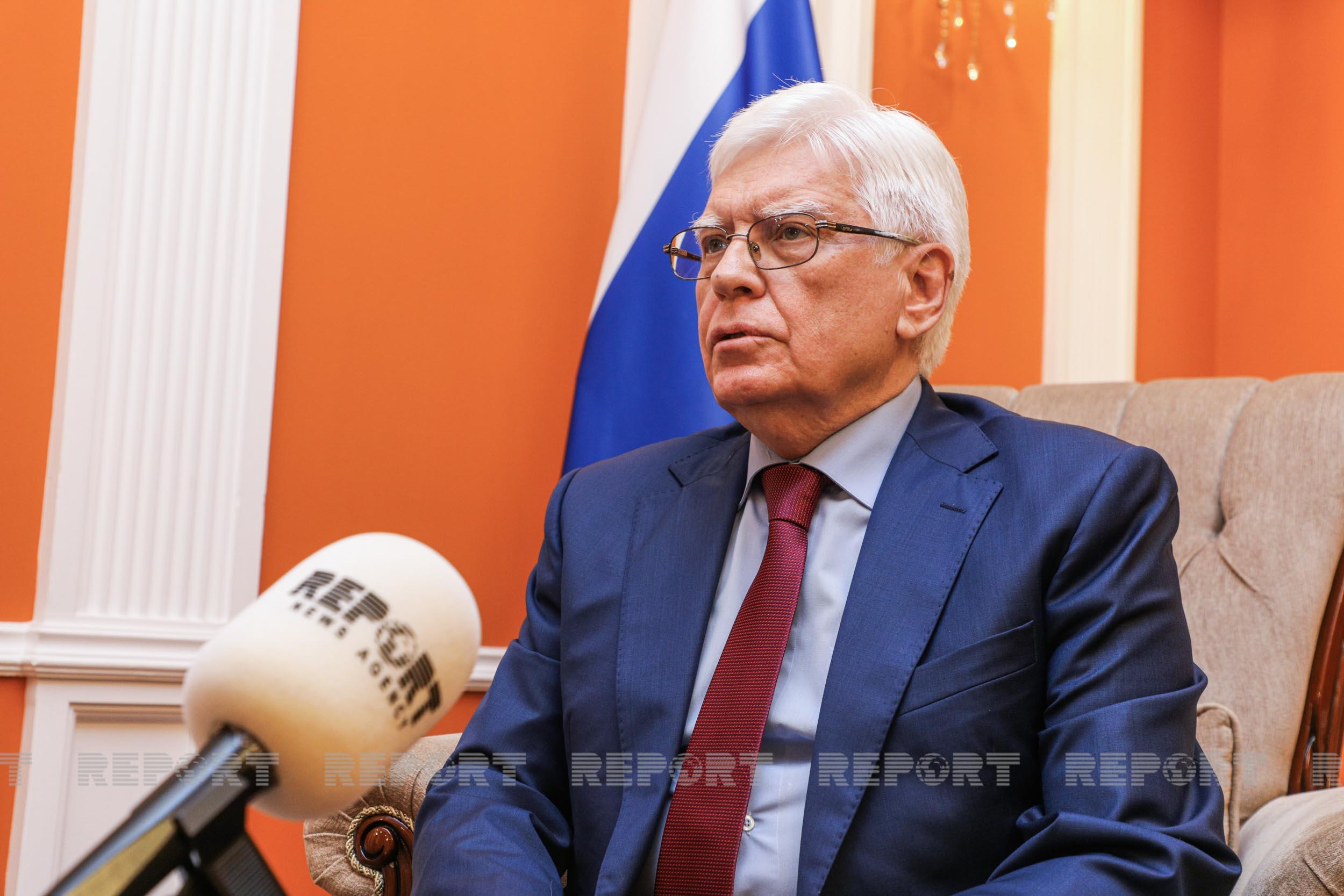 - As you know, the process of vaccination is in full swing in Azerbaijan. Moreover, in percentage terms, Azerbaijan occupies one of the leading places among the CIS countries. How do you assess the vaccination process in the country?

- Well, I believe that the progress of vaccination, of course, is primarily assessed by the government of the Republic of Azerbaijan. But we, as an embassy, ​​see with great satisfaction that as a result of measures taken by the Azerbaijani side, including the Task Force under the Cabinet of Ministers, the incidence rate in Azerbaijan has dropped sharply. The latest figures show that this is about 100 people a day. In my opinion, it is an excellent result. We will, of course, continue to cooperate, exchange experience between our countries in this area. I think that it can only cause joy that work is being done so well in Azerbaijan that it leads to a decrease in cases.

I would like to believe that we have passed the peak. We already understand more or less what a coronavirus pandemic is, what measures must be taken to contain it and what to do to prevent it from affecting our economic ties seriously.

- How do you assess the work of the trilateral working group at the level of deputy prime ministers of Azerbaijan, Armenia, and Russia?

- The decision to create a trilateral working group contained in the trilateral statement of January 11 this year turned out to be very timely and correct. In general, Russia fully shares the determination of the leadership of the Republic of Azerbaijan, which is expressed by Mr. President, aimed at the economic development of the entire region, the restoration of economic ties, and the opening of previously blocked communications. It is the immediate task of this tripartite group.

I have no right to assess the working group, but it is assessed by our leaders. During contacts at the highest level, its activities are positively assessed. This is a successful form that meets the spirit of the present moment - the desire to reduce tension in the region and try to move forward to benefit the economy and the people living here.

- In case of fruitful work of the trilateral working group, what projects can be implemented in the future to restore communications?

- As I said, first of all, the work of the trilateral working group is aimed at logistics and transport communications. It is the main task at this stage. The working group has its subgroups that consider the specifics. I will not get ahead of myself, speaking about which of the existing communications will be opened in the first place - this is now the subject of discussions within the group.

But in general, we are talking about communications, which would bring economic benefit to all countries of the region. 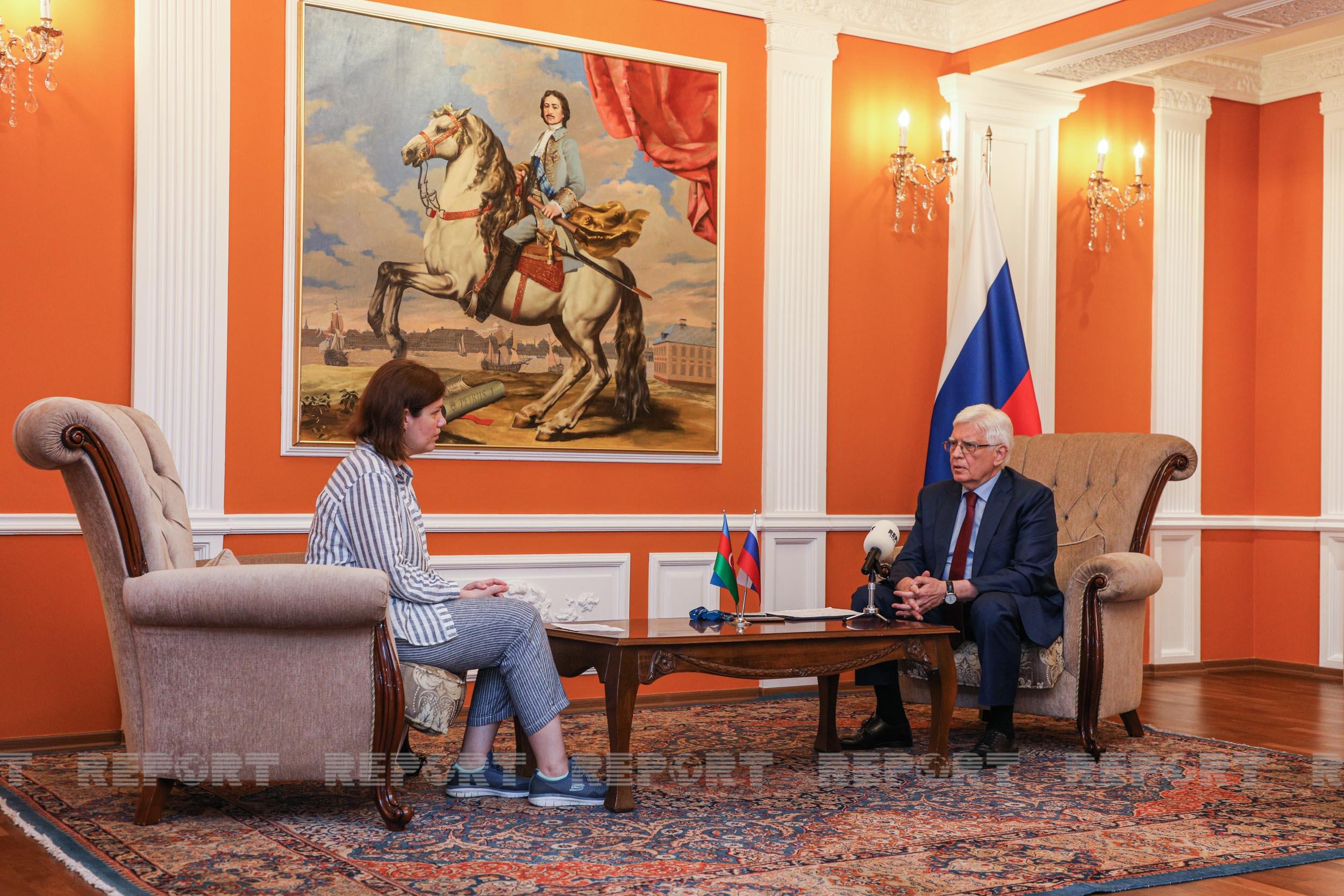 - Of course, it is possible. Since Russia is one of the parties to the trilateral working group, our companies may be interested in transport, logistics, and road projects. And as for the restoration of life in the regions, yes, of course, we would gladly familiarize ourselves with the list of proposals of the Azerbaijani side regarding the stage and in what form Russian companies can join. As we know, the Azerbaijani leadership is now developing plans for the restoration of specific regions, for example, Aghdam. It should be followed by plans and programs for the rehabilitation of other areas. We are interested in joining this process. 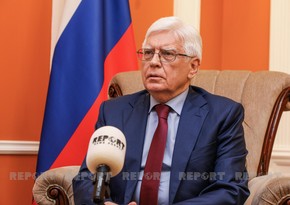 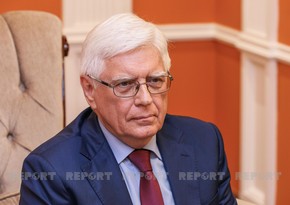 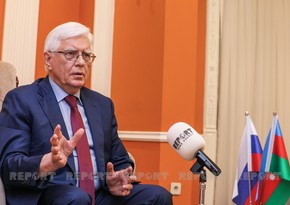 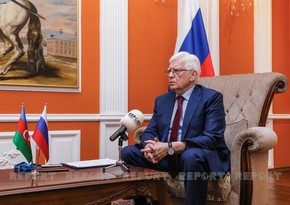