Riga hosts I Media Conference of Eastern Partnership countries The conference attended by about 350 representatives of the media, including Azerbaijan
1607 Opening the conference, the Speaker of the Latvian Parliament, Ināra Mūrniece said that, holding of the First Media Conference is an initiative of Latvia's presidency in the EU and is actual today, especially considering the "threatening situation caused by Russia in the eastern Ukraine."

"Freedom of the press and freedom of speech are cornerstones of democracy and free and self-confident society", the Speaker said.

Speaker of the Latvian Saeima stressed the importance of the media in conveying objective information, noted the need to resist the pressure of misinformation.

"Therefore, our meeting is very necessary. It will make a valuable contribution to the Summit and the final declaration of the summit", said Ināra Mūrniece.

Among the special guests of the conference: EU Commissioner for European Neighbourhood Policy,Johannes Hahn, the former Latvian President Vaira Vīķe-Freiberga, the Commissioner for Human Rights of the Council of Europe, Nils Muižnieks, the OSCE Representative on Freedom of the Media, Dunja Mijatović, and others.

Today Riga also brings together the participants of the Conference of the representatives of civil society in the Eastern Partnership countries. 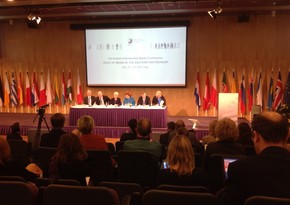