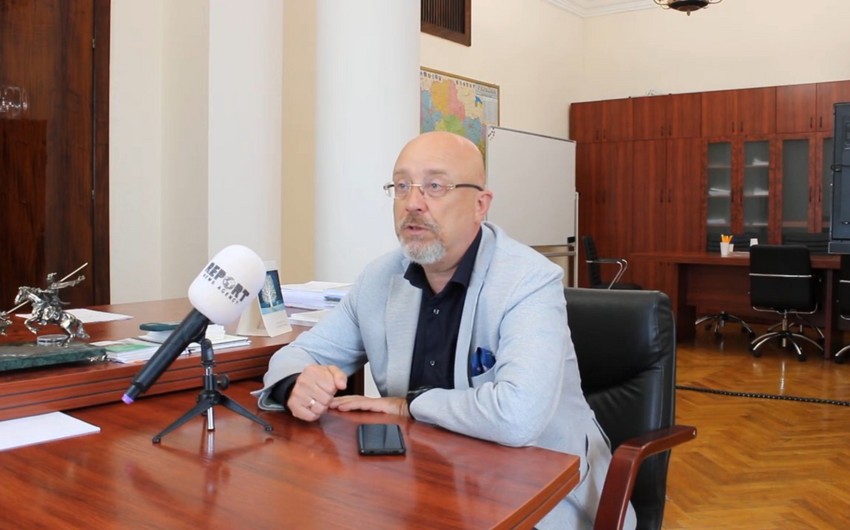 Report presents an interview with .

- You recently paid a working visit to Azerbaijan. How do you assess the results of this visit? What kind of cooperation agreements were reached?

- Firstly, I am happy that I managed to go abroad. I have long wanted to come to Azerbaijan on a working visit. Earlier, I was here as a tourist. It was vital for me to talk with colleagues - members of the Azerbaijani government and colleagues who deal with refugee issues. We discussed bilateral relations with the first deputy prime minister. Today, there is a hectic, active agenda of relations between Ukraine and Azerbaijan, first of all, at the presidential level. Therefore, it was also essential for me. As I said during my speech to the Azerbaijani press, we have similar destinies. We have neighbors who behave unfriendlily. Our territories are temporarily occupied, and yours are, too. Our territory has been mined, and your territory has been mined as a result of this war. Demining alone implies more than one decade. The experience of Croatia is already showing this. I was in Croatia, and I studied the work of the Croatian Mine Action Center (CROMAC). The war in Croatia ended 25 years ago, and they are continuing the necessary demining activities. Therefore, it was the establishment of contacts. The purpose of my visit is, first of all, to get acquainted, to see how things are going on.

In particular, I went directly to the Aghdam district, where I saw how the sappers of the worked. I saw what was left of Aghdam from this blooming valley and how much labor would have to be invested in restoring it. This is what I wish, of course, the Azerbaijani people to do as soon as possible. Therefore, we are ready to help with our experience. But we understand that Azerbaijan already has its own experience, and this is a mutual exchange to improve people’s lives. The most important thing is that everything is done for people. I am sure that this won’t be my last visit to Azerbaijan. I am planning to visit again because we already have a close, good relationship. 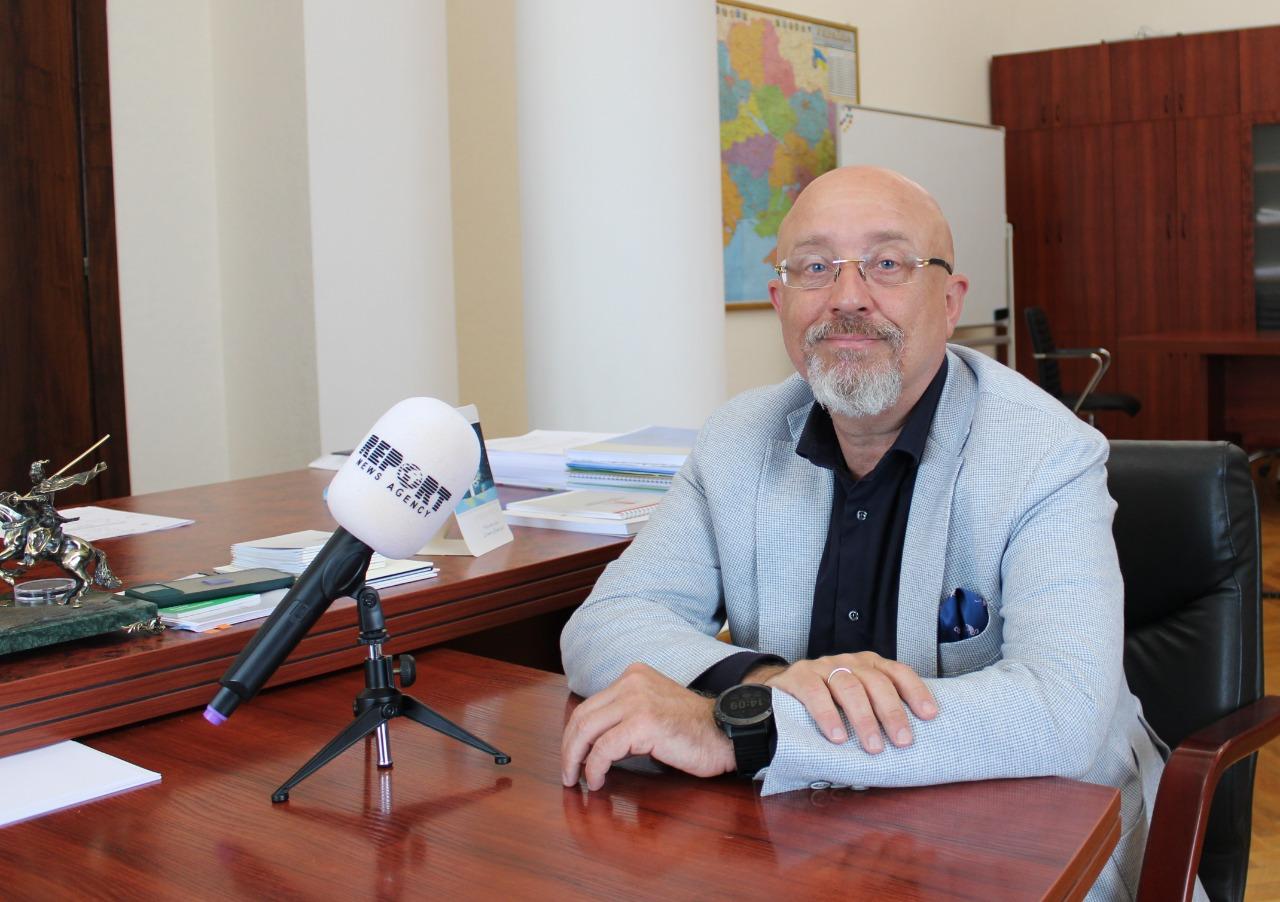 I also invited representatives of Azerbaijani businesses to look at Ukraine as an investment platform, especially considering that we are finishing work on approving a strategy for the economic development of the Donetsk and Luhansk regions. These two regions suffered from the war that began in 2014. To date, two-thirds of our territory has been de-occupied, more than 200 settlements have already been de-occupied. Today there are lines of contact, but the part that suffered requires additional economic influence. There is the Normandy Process, the Minsk Process. We are talking about a political and diplomatic approach to solving this problem, but we will definitely solve it. Again, we see how much strategic patience Azerbaijan has. I believe that such trips are important for mutual exchanges, it seems to me that you and I have a great joint future.

- Has Ukraine included Azerbaijan in the list of strategic partner countries? What opportunities did this open up between the two countries?

- First of all, of course, this is the interaction of both government and state companies. This is number one, i.e., everyone understands that there is a political decision, that these countries are strategic partners. This means full priority, full assistance if needed. This, of course, makes it possible for a business to work. Because the economy is mainly driven by business, there are active Ukrainians in Azerbaijan, Azerbaijanis in Ukraine.

- What opportunities does this business activity provide?

There is a production that is known in Ukraine and is needed in Azerbaijan, etc., the issues of agricultural support, food security. Azerbaijan is building a lot, and respectively, there is a need for cement, concrete, etc. Depending on what our countries need, we can mutually receive it from each other. 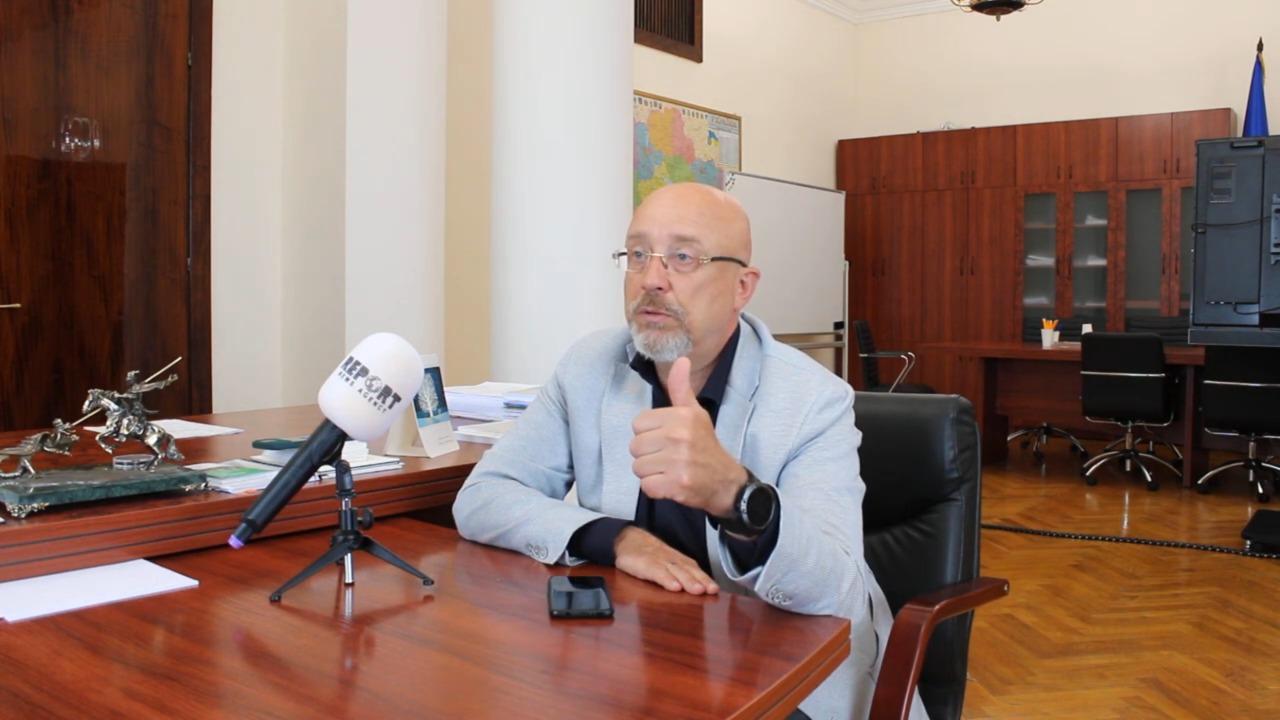 - How do you assess the current level of Azerbaijani-Ukrainian relations? Which sides are the strongest, and which ones need to be deepened?

- It seems to me that now there is a very high level of our relations, and the impetus, it seems to me, has been given by the political leadership of the two countries. Personal relationships are significant. It seems to me that today representatives of our parliament, deputies, and government members already understand this. Our countries have very warm relations. Now our task is simply to develop them as much as possible. Perhaps the time has come to develop them at the regional level because there is already a favorable political atmosphere.

At the end of last year, Azerbaijan liberated its internationally recognized territories from the Armenian occupation. How do you assess the success of Azerbaijan?

- I believe that this situation confirms that an internationally recognized order was established in the world after the Second World War: respect for the territorial integrity of states, for internationally recognized borders. It was obvious. The seizure of territory by military means, an attempt at annexation, and its occupation are not allowed. The world doesn’t recognize this, and therefore today, it is important for both countries that the whole world recognizes and respects our territorial integrity and internationally recognized borders. There is a political and diplomatic path of reintegration. If it doesn’t work, something else happens. But this always means casualties, the loss of people’s lives. Many young people died in this war, and they continue to die in Ukraine. People, civilians are suffering. They are losing their homes.

Today, it is essential to preserve this fragile peace in the world when it is necessary to respect territorial integrity and borders. Then you can live with neighbors, negotiate and interact. That’s because politicians make decisions, but people suffer.

- Immediately after the de-occupation of the lands, the Azerbaijani authorities announced a large-scale restoration of the liberated territories, and Baku invited friendly countries to join this issue. To what extent is Kyiv interested in this process and plans to take part in it?

- We are definitely ready to help with everything we can if we have experience or expertise that is in demand. For example,

- Do you have an agreement on training Azerbaijani cadets?

- No, there is no contract, we just discussed such a potential possibility, but it seems to me that it is possible. You had a request whether the Ukrainian instructors can come immediately to the place. I asked our service, but they replied that there is no potential for them to leave. But if there is a need to accept cadets in Ukraine, our country will be ready to make such a special course. 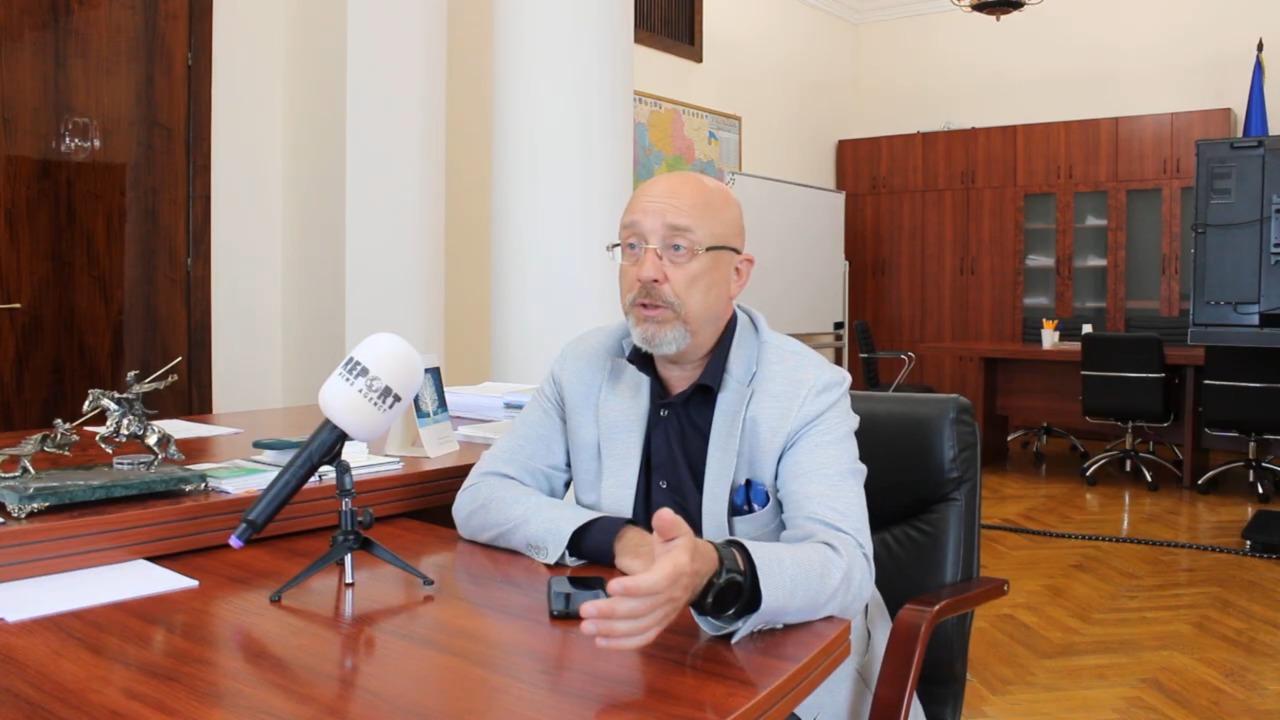 - Ukraine is faced with a similar problem of restoring territorial integrity. How Ukraine and Azerbaijan could cooperate in these matters? What is the current situation in eastern Ukraine?

- Today, we can tell by several parameters what is happening in the east. First, the occupation regime, which today controls the Donetsk and Luhansk regions that are partially occupied, almost completely blocked the work of the EECPs (entry/exit checkpoints), where ordinary people could cross them. In the Luhansk region, only one EECP operates, although there are three of them there. In Donetsk, there are four, but one only works twice a week. They are doing medical genocide for people not to enter the territory of free Ukraine and receive medical services, vaccinations, and retirement savings. This money has been accrued for pensioners. Some 272,000 pensioners live in the occupied territories listed in our register, and they have the right to receive a pension. The state, the Pension Fund, accrue pension for these people, but they cannot receive it. They cannot get out of there. As a last resort, people have to travel to Russia and, after many thousands of kilometers through Russia, enter Ukraine in another region. Now they restrict children who want to study at Ukrainian universities. They do everything they can to prevent children from entering free Ukraine and Ukrainian universities. Of course, last year in July, we reached an agreement on a ceasefire within the trilateral contact group - the Minsk process - and until January, this regime was more or less observed. Still, since January, it began to be violated again, sniper shelling began, they throw mines, and, unfortunately, the Ukrainian soldiers are dying, who today guard our sovereignty there. The situation is tense. There was a certain tension, as you remember, before the spring holidays, when in Crimea they were pulling troops to the border with Ukraine with up to 100,000-people contingent on the part of the Russian Federation, according to the estimates of our military. But, fortunately, this provocation didn’t work. Yet, we understand that anything can happen, and therefore we are ready for this. Interaction continues at the diplomatic level, consultations in the Normandy format. The leaders of Germany and France are helping us. We know there was a meeting with President Biden, and perhaps there is an understanding of more active participation of the American side. We know there will be a meeting between President Zelensky and President Biden at the end of the month.

We want everyone to live in his or her country peacefully, there is no need to claim our territory, our territorial integrity, and then we will be able to live with such neighbors. It is important.

- You’ve probably heard that there is an active diaspora both in Ukraine and Azerbaijan. Azerbaijan has a very active Ukrainian diaspora, and Azerbaijanis are very active in Ukraine. How do you assess the role of diasporas in the development of relations between the two countries?

- I think that the diaspora comprises ambassadors of their countries in the host country. An active diaspora plays a significant role. With Ambassador of Ukraine to Azerbaijan Vladyslav Kanevsky, we have just discussed how active the Ukrainian diaspora is in Azerbaijan today.

- How do you assess the diplomatic activity of the embassies of Ukraine and Azerbaijan?

- Our ambassador has been in Azerbaijan for two years. He previously worked in European countries. I talked to him, and he is delighted with Azerbaijan because it was at first like a discovery, and now he is delighted that he can benefit both countries in this country. The representative of Azerbaijan in Ukraine shows the same active position. There is official diplomacy - two ambassadors, and there is unofficial diplomacy, people’s diplomacy - this is the diaspora. It seems to me that these are the two wings that can help two planes fly correctly.