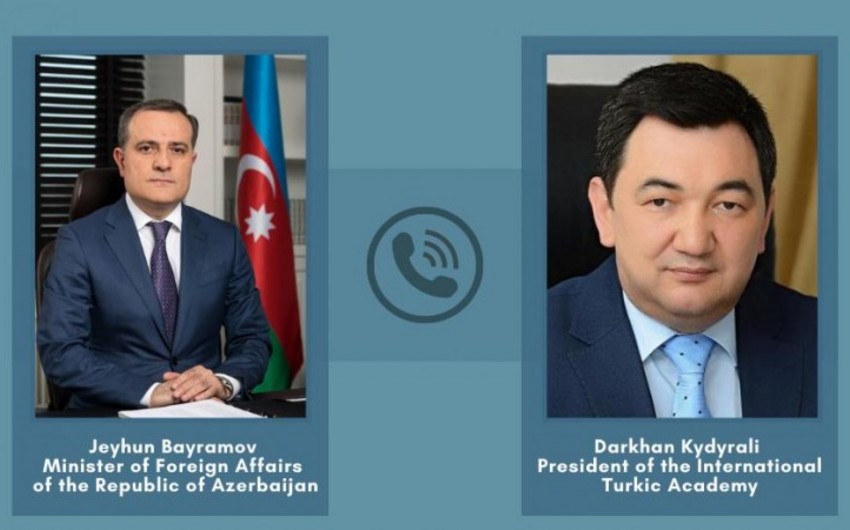 On 19 October 2020, upon the other side's initiative, the telephone conversation took place between the Minister of Foreign Affairs of the Republic of Azerbaijan Jeyhun Bayramov and the President of the International Turkic Academy Darkhan Kydyrali.

Minister Jeyhun Bayramov informed Darkhan Kydyrali of the violation of the humanitarian ceasefire by the armed forces of Armenia. He noted that the armed forces of Armenia attacked the Azerbaijani positions in the direction of the Jabrayil region, as well artillery shelled Gadabay and Tovuz regions of Azerbaijan on the border of two states yesterday, also continued shelling the civilian infrastructures during the day, including the cotton factory in Tartar region despite the second humanitarian truce. Minister Jeyhun Bayramov stressed that the missile attacks on the Azerbaijani city of Ganja and the targeting of civilians in the war crime and leadership of Armenia bear responsibility for this crime.

President of the International Turkic Academy Darkhan Kydyrali expressed his deep condolences on the loss of lives. He strongly condemned the deliberate missile attack on Ganja city by Armenia's armed forces and stressed the inadmissibility of targeting civilians and civilian infrastructures. Darkhan Kydyrali emphasized the importance of the settlement of the conflict within the territorial integrity of the Republic of Azerbaijan and based on the UN Security Council resolutions.