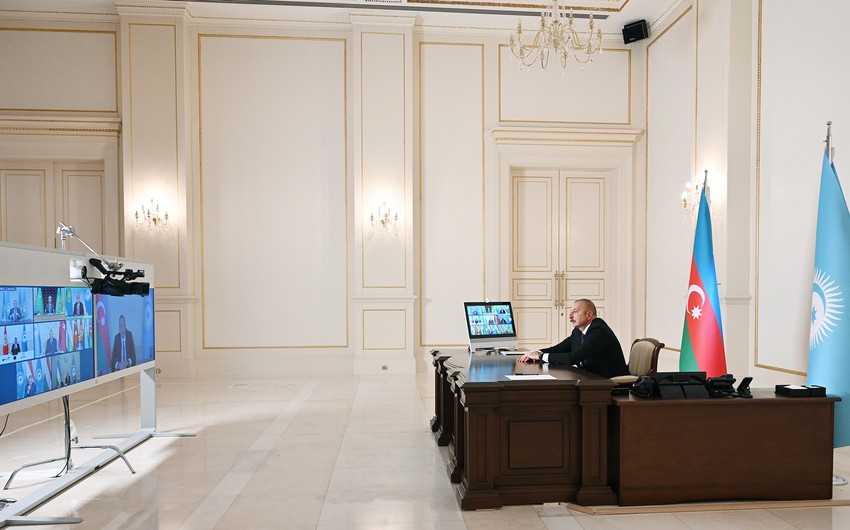 An informal Summit of the Cooperation Council of the Turkic-Speaking States (Turkic Council) has been held in a video conference format, Report informs referring to .

President of the Republic of Azerbaijan Ilham Aliyev made a speech at the Summit.

In his opening remarks, President of the Republic of Kazakhstan Kassym-Jomart Tokayev welcomed the event participants.

The head of state made a speech at the Summit.

Speech of President of the Republic of Azerbaijan Ilham Aliyev

- Dear President of the Republic of Kazakhstan,

Today's summit is the second summit since the October 2019 summit in Baku. A year ago, in April last year, a summit on COVID-19 was held at the initiative of Azerbaijan in Baku, and this is an indicator in itself. It shows that summits are held regularly and, of course, this has a great positive impact on the unity between member states.

At the end of this year, Azerbaijan will hand over its chairmanship of the Turkic Council to brotherly Turkey. The official summit to be held in Turkey will provide information on the work done during Azerbaijan’s chairmanship.

Today, I would like to take this opportunity to provide information about the second Karabakh war. As you know, Armenia had occupied the internationally recognized territories of Azerbaijan for almost 30 years. As a result of this occupation, about 20 percent of our lands were occupied by Armenia, more than a million Azerbaijanis were expelled from their native lands and found themselves in the status of refugees. A policy of ethnic cleansing was pursued against our people. Armenia committed genocide against Azerbaijan. As a result of the Khojaly genocide in 1992, more than 600 innocent civilians were brutally killed. Among them were 106 women and 63 children.

International organizations have always supported Azerbaijan's position. However, this support was not so important in real life because the issue was not being resolved. The UN Security Council, the world's highest international body, has adopted four resolutions. These resolutions demanded an immediate, complete and unconditional withdrawal of the Armenian armed forces from the occupied territories. These resolutions were adopted in 1993 and remained on paper. Resolutions of other international organizations supported Azerbaijan's position, and this had tremendous political and legal significance. However, on a real and practical level, they did not reserve to solve the problem. The OSCE, the Non-Aligned Movement, the Organization of Islamic Cooperation, the European Parliament, the Parliamentary Assembly of the Council of Europe and other organizations have defended Azerbaijan's rightful position.

The OSCE Minsk Group was established in 1992 to resolve the issue, and although it had been working for 28 years, there was no result. The result of the Minsk Group was equal to zero. However, the countries co-chairing the Minsk Group are the world's leading countries, nuclear states and permanent members of the UN Security Council. Of course, the issue could have been resolved peacefully long ago if serious pressure had been put on Armenia because of the occupation and if sanctions had been imposed in response to Azerbaijan's demands.

Unfortunately, this did not happen. On the contrary, steps were taken to freeze the issue. As a matter of fact, Armenia refused to hold negotiations. Whereas in previous years it was at least engaged in imitating the talks, in the last two to three years they had been saying openly and demonstratively that not an inch of Azerbaijani land would be returned to Azerbaijan. In addition, the irresponsible and provocative actions and statements of the Armenian leader made the talks virtually meaningless. Two years ago, the Armenian leader said that “Karabakh is Armenia and full stop.” Of course, we had an answer for that, and the most serious answer was provided on the battlefield. However, this in itself shows that the Armenian leadership considered the issue resolved and did not want to return the lands. In addition, the former Armenian defense minister, who was fired after a military defeat, was threatening Azerbaijan with a new war. During a meeting with Armenian diaspora organizations in the United States, he stated that Armenia was preparing for a new war for new lands. In fact, this was a very serious provocative step against Azerbaijan. The former defense minister who threatened us with war was fired for a military defeat.

Another provocative step was the swearing-in of the illegal junta, the former head of the Nagorno-Karabakh regime, in the ancient Azerbaijani city of Shusha, our cultural capital. This was an insult to the Azerbaijani people. The relocation of the so-called parliament of the so-called “Nagorno-Karabakh Republic” to Shusha and the construction of a building for the parliament – which will now be knocked down – were another provocative step. In other words, all these steps showed that Armenia was provoking us, was counting on a harsh response from us in order to blame us afterwards and try to delay the issue for another 30 years. We did not succumb to the provocation. We acted with restraint, in accordance with all the norms and principles of international law, but Armenia committed a military provocation against us last summer. Our positions on the Armenian-Azerbaijani border came under fire. Armenian military units tried to cross our border, and several of our servicemen were killed. We responded to them, pushed them back but we did not cross the Armenian-Azerbaijani border. The military conflict that lasted for several days stopped because we did not intend to wage war on the territory of Armenia. However, if we had wanted, we could have easily entered the territory of Armenia. A month later, in August, a new provocation was committed when a sabotage group was sent to Azerbaijan. The leader of the subversive group was detained and testified that he was sent to Azerbaijan to carry out acts of terror – so this was another provocation. Finally, in late September, our military positions and settlements came under artillery fire, and several of our servicemen and civilians were killed. Naturally, we responded adequately, conducted a counter-offensive and punished the enemy. The 44-day Karabakh war resulted in a complete victory for Azerbaijan. Azerbaijan regained its territorial integrity, more than 300 towns and villages were liberated on the battlefield during the war. Our historic city of Shusha was liberated from the occupiers on 8 November and Armenia was forced to sign an act of capitulation.

In the early hours of 10 November, the presidents of Azerbaijan and Russia and the prime minister of Armenia signed a statement. Based on this statement, our other districts were returned to Azerbaijan through political means. So issue was resolved by both military and political means. It is safe to say that the Nagorno-Karabakh issue, the Nagorno-Karabakh conflict has been resolved. There is currently no territorial unit named Nagorno-Karabakh. Azerbaijan has resolved this issue, achieved a historic victory and started restoration work in the destroyed areas.

We have received great support from brotherly Turkey since the first day of the war. My dear brother, President Recep Tayyip Erdogan openly expressed support for Azerbaijan on 27 September, the day the war began. This political and moral support was very important. My dear brother said Azerbaijan was not alone and that Turkey was with Azerbaijan. Of course, it was a very serious message, a serious signal. This allowed us the opportunity to conduct a successful counter-offensive and prevented outside forces from interfering. I have always said that without foreign intervention, Azerbaijan could resolve the Nagorno-Karabakh conflict in a short time, and so it happened. I would like to express my deep gratitude to brotherly Turkey and its esteemed President Recep Tayyip Erdogan for this support. Numerous statements by President Erdogan and other Turkish officials during the war and at various times have played a particularly important role in resolving the issue. President Recep Tayyip Erdogan was the first to congratulate me and the people of Azerbaijan on the liberation of Shusha. He conveyed this congratulation to us on 8 November. The Turkic Council issued a statement in support of Azerbaijan on 28 September, a day after the war. It made similar statements several times during the war. We thank the Turkic Council for that. Other international organizations such as the Non-Aligned Movement and the Organization of Islamic Cooperation have provided their political support.

Everything in the liberated lands has been destroyed. Journalists and diplomats are visiting those places now. They see that cities have been destroyed, houses have been destroyed, villages have been destroyed, our historical sites have been destroyed. Foreign and local journalists have called Aghdam the Hiroshima of the Caucasus. After the liberation of Fuzuli, there was not a single safe building left in the city for us to raise the Azerbaijani flag on. Armenians have destroyed all our cities, destroyed all our historical sites, plowed cemeteries, destroyed graves, destroyed more than 60 mosques and kept cows and pigs in half-demolished mosques. These videos are available on the Internet. In other words, this is an insult to the entire Muslim world, a crime, and the whole world already sees and should see that. We have fulfilled our historic mission. We have destroyed Armenian fascism. At present, restoration work has begun. After the war, many Azerbaijani civilians and servicemen were killed and wounded by landmines. Armenia still does not give us maps of minefields. This is another war crime. Therefore, demining will take more time. Without the completion of this work, of course, we will not be able to return our IDPs and refugees to those lands.

The war is over and the conflict has been consigned to history. New opportunities have emerged. I think the most important opportunity among these is transport. We are already working very hard on the Zangazur corridor. I said at the summit in Nakhchivan that the decision to separate Zangazur from Azerbaijan and annex it to Armenia led to a geographical divide of the Turkic world. If we look at the map, it looks as if a dagger was stuck in our body and the Turkic world was divided. Zangazur, the land of ancient Azerbaijan, will now play the role of uniting the Turkic world because the transport, communication and infrastructure projects passing through Zangazur will unite the whole Turkic world and create additional opportunities for other countries, including Armenia. Armenia currently has no railway links with its ally Russia. This railway link can be established from the territory of Azerbaijan. Armenia has no railway connection with its neighbor Iran. This railway can be provided through Nakhchivan. Azerbaijan will be connected with Turkey through the Nakhchivan Autonomous Republic, Central Asia will be connected with Europe. So a new transport corridor is being created. Azerbaijan has already started this work. I am confident that our partner countries will also take advantage of these opportunities.

I want to conclude my speech. I want to say again that I have dedicated my speech to this issue. This is natural because the leaders of friendly countries must know the essence of the issue. I do hope that during our further contacts we will discuss this issue in a broader format. I am sure that we will all attend the summit in Turkey in person. As the chairing country, we will report on the work done and talk about future plans. Thank you for your attention. 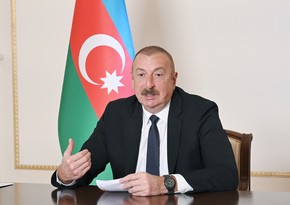 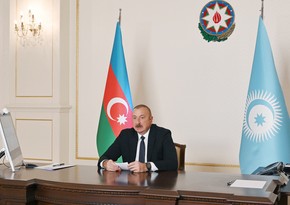 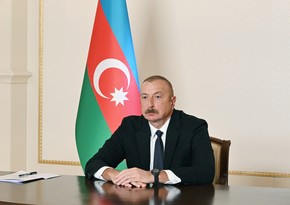