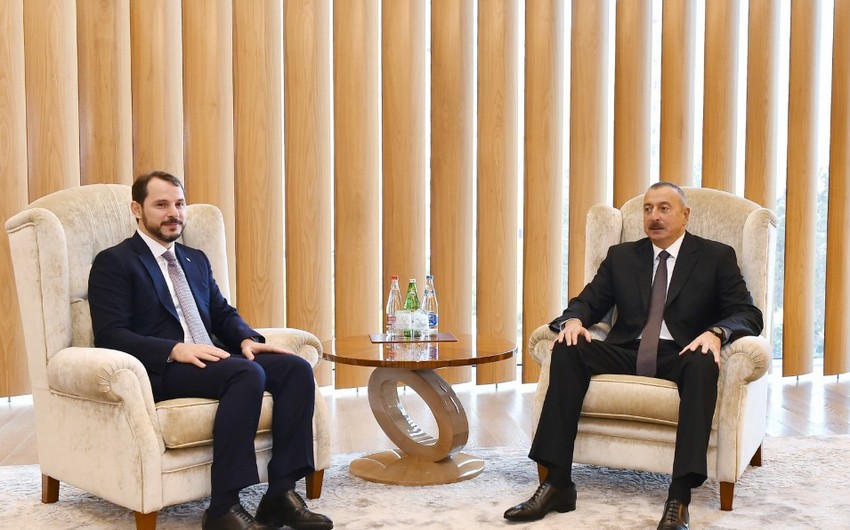 Report informs, President Ilham Aliyev expressed his gratitude for kind words in President Recep Tayyip Erdogan's message of congratulation in connection with today`s ceremony in Baku. The head of state said today`s event strengthened the existing energy cooperation between Azerbaijan and Turkey, and also extended his congratulations on this occasion.

Berat Albayrak extended Turkish President Recep Tayyip Erdogan's greetings to President Ilham Aliyev. He described Azerbaijan-Turkey energy cooperation as a model for the rest of the world. The Turkish minister said this cooperation is enriched with new projects and mutual investment.

They noted the importance of joint strategic projects carried out by Azerbaijan and Turkey, and expressed their confidence that friendly and brotherly relations between the wo countries will continue to expand. They stressed the significance of the Amended and Restated Agreement on the Joint Development and Production Sharing for the Azeri and Chirag fields and the Deep Water Portion of the Gunashli field in the Azerbaijani sector of the Caspian Sea, saying it will contribute to developing both countries` economies and improving both nations` well-fare.

President Ilham Aliyev thanked for the Turkish President`s greetings, and asked the minister to extend his greetings to Recep Tayyip Erdogan.