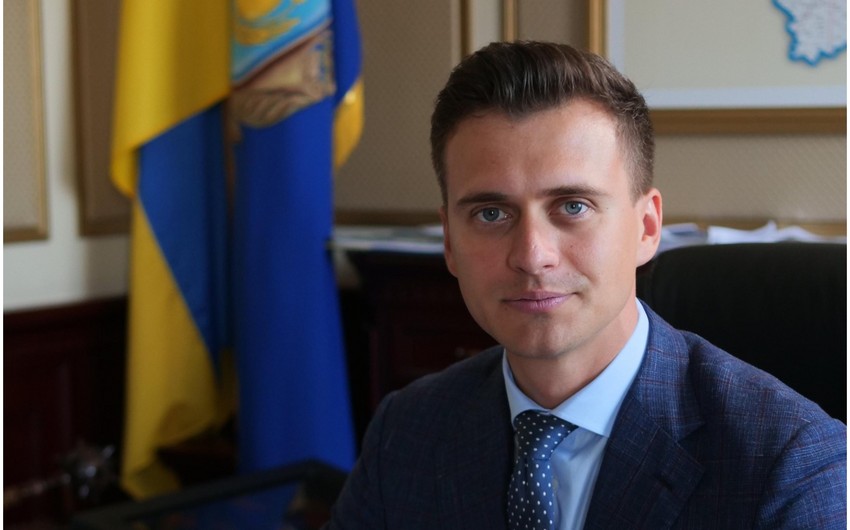 Eastern Europe Bureau of Report presents an interview with Oleksandr Skichko, Head of the Cherkasy Regional State Administration in Ukraine

- How do you assess the current level of development of relations between the regions of Azerbaijan and Ukraine? In which sectors is there a need for deepening cooperation?

- Since I am the head of the Cherkasy Regional State Administration, I propose to talk about cooperation between Ukraine’s Cherkasy region and Azerbaijan. I can say that there are bilateral economic relations, as well as prospective for their development. From January through March 2021, bilateral trade between enterprises of the Cherkasy region and Azerbaijan amounted to $1.9 million. Its structure mainly includes export, which reaches 70 percent. If we talk about the structure, it includes primarily food, timber, fuel materials, antifreeze drugs, etc.

An enterprise with Azerbaijani investments operates in the Cherkasy region. This is Ahmet Yar UA LLC, which is engaged in the production of industrial refrigeration equipment.

Of course, we are interested in bilateral cooperation, particularly in the creation of enterprises with Azerbaijani investments in our region. Naturally, the regional authorities are ready to assist in creating such industries within the framework of the law and our powers.

- Is it possible to sign a twinning agreement between the cities of the Cherkasy region with one of the liberated districts of Azerbaijan?

- It already exists. On September 3, 2003, the cities of Sumgait (Azerbaijan Republic) and Cherkasy (Ukraine) signed an Agreement on restoring friendly relations, which is currently in force. True, due to the global pandemic and quarantine, active work has recently been suspended. Hopefully, it will resume soon. The development and establishment of international cooperation are essential areas of work of the Cherkasy Regional State Administration. So, at present, the region has seven interregional agreements, five protocols of intent, and one memorandum of cooperation. In addition, the cities and territorial communities of the region have 47 partnership agreements.

- Ukraine is at the stage of reforms. What reforms are you carrying out in the region?

We are also working on implementing large-scale projects within the Ukrainian presidential program ‘Big Construction.’

This is not just the renewal of infrastructure. It is a change in approaches to planning, design, and construction of facilities.

The goal of the program: not to delay the processes, but in the short term, to prepare and approve documentation, build and commission facilities.

We are concentrating our efforts on the development of the medical industry. What can be more important than the health of our citizens! In addition to vaccination against COVID-19, several regional infrastructure projects are envisaged. We strive to bring our medicine to a new quality level.

The projects that we are implementing in tourism and digitalization are also significant for us. In addition, we are working on creating the Center for the Development of the Creative Economy of the Cherkasy Region. After all, we want to ensure the development of industrial startups in the region so that young people have more opportunities for self-employment without emigration.

Tourism is also a priority area in the work of the regional government. We actively renovate and restore tourist facilities, equipping navigation and promoting tourist locations in the Cherkasy region. I constantly meet with Ukrainian and foreign specialists in tourism development, and we draw on their experience. Taking this opportunity, we are inviting Azerbaijanis to visit our region. We are just two hours ride from Boryspil International Airport. You won’t find such picturesque places as in the Cherkasy region anywhere!

- How do you see the role of ethnic peoples, including Azerbaijanis, in these reforms in general and in the development of the regional economy in particular?

- The regional state administration promotes the activities of public and charitable organizations aimed at meeting the educational, cultural, informational, and religious needs of citizens of Azerbaijani nationality, preserving and developing their ethnic identity. There are two public associations of Azerbaijanis in the Cherkasy region. A representative of a public organization of Azerbaijanis joined the council of the regional state administration on interaction with public organizations of national minorities. This is the Chairman of the Cherkasy regional organization of the Congress of Azerbaijanis of Ukraine, Mazahir Ibrahimov. We strive to develop our region’s economic and cultural potential and make a comfortable living for citizens and ethnic minorities.

Ukraine is undergoing such a period when there is a war going on and the country needs the cohesion of Ukrainians and ethnic minorities. Many Azerbaijani young people live in Ukraine. Do you have any plan to mobilize these young people so that they support Ukraine’s just cause?

- Of course, we stand for peace. Any military conflict means the death of people, broken families, as well as substantial economic losses. We are grateful to the ethnic Azerbaijanis who support Ukraine’s just cause in the conflict with Russia. Your question contained a vital idea: we all need peace and cohesion. This is the main issue that should be on the agenda today.