Mammadyarov: Attempts to change internationally recognized borders of states by use force is unacceptable

Mammadyarov: Attempts to change internationally recognized borders of states by use force is unacceptable Azerbaijani and Italian Foreign Ministers have held a meeting Baku. 8 November. REPORT.AZ/ “Azerbaijan and Italy have strong and reliable cooperation,” said Minister of Foreign Affairs and International Cooperation of the Italian Republic Paolo Gentiloni as he met with Azerbaijan`s Foreign Minister Elmar Mammadyarov as part of his official visit to Baku.

Report informs referring to the press service of Azerbaijani Ministry of Foreign Affairs, at the meeting, the sides expressed their satisfaction with the level of bilateral relationship and comprehensive cooperation in various fields between Azerbaijan and Italy. Commending high level political and economic relations between the two countries, they stressed the importance of making joint efforts to further strengthen this relationship. The ministers emphasized that the fundamental base of the bilateral political relations is “Joint Declaration on Strategic Partnership” between Azerbaijan and Italy.

Foreign Minister Elmar Mammadyarov hailed his Italian counterpart’s first ever visit to Azerbaijan, noted that stable political, economic, energy, petrochemical, transport, tourism and humanitarian cooperation is successfully developing between the two countries, while touching upon the importance of activity of Intergovernmental commission.

Minister Paolo Gentiloni said “there is solid basis of our relations, and fortunately we enjoy the excellent Italy-Azerbaijan economic attitudes.” He also added that his country supports the development of a new level of relationship between Azerbaijan and the European Union.

Minister Elmar Mammadyarov underlined that the projects implemented by the Heydar Aliyev Foundation led by the First Lady of the Republic of Azerbaijan which particularly contributed to the humanitarian dimension of cooperation between the two countries.

FM Mammadyarov briefed his Italian counterpart about the transport projects with Azerbaijan’s initiative and participation, including Baku-Tbilisi-Kars railway and invited the Italian companies to benefit from these opportunities.

The sides exchanged views on the implementation the TAP project which will play a significant role in ensuring the energy security of Europe. The ministers also spoke about the importance of the development of cooperation in the framework of international organizations and forums as well as mutual supports in this regard. They expressed their consent on the development of Azerbaijan-Italy interparliamentary relations, and stressed that the reciprocal visits of the delegations contribute to the political relations between the two countries.

Noting that Italy is one of the states of OSCE Minsk Group, Minister Mammadyarov informed his colleague on the latest status of the Armenia-Azerbaijan conflict.

Elmar Mammadyarov underscored that according to the norms and principles of international law and in compliance with the relevant resolutions of the UN Security Council the conflict has to be only settled on the basis of territorial integrity, sovereignty and internationally recognized borders of Azerbaijan. The Azerbaijani Minister also stated that the OSCE Minsk Group co-chair countries at the level of heads of state declared the fact of unacceptability and unsustainability of the current status-quo. He stressed that the attempts to change the internationally recognized borders of states by use force is unacceptable. He added that Armenia attempts to undermine the negotiation process by pursuing destructive policy and resorting to the acts of provocations after Vienna and Sankt-Petersburg meetings.

During the meeting, the sides mentioned the successful activities of Italian companies in Azerbaijan, particularly in energy sphere and stressed the importance of taking the necessary steps for the continuation of this successful collaboration in non-oil sector, especially in the fields of agriculture, textile-garment, leather processing, construction materials production, tourism, cultural and scientific-technical areas. 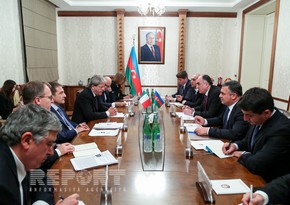