Israeli expert: Iran irritated by Azerbaijan’s independent foreign policy Azerbaijani journalists of the older generation remember their talented colleague - deputy editor-in-chief of the Sumgait Communist newspaper Mark Gorin. Gorin worked for the Sumgait newspaper for ten years, where he started as a correspondent and later b 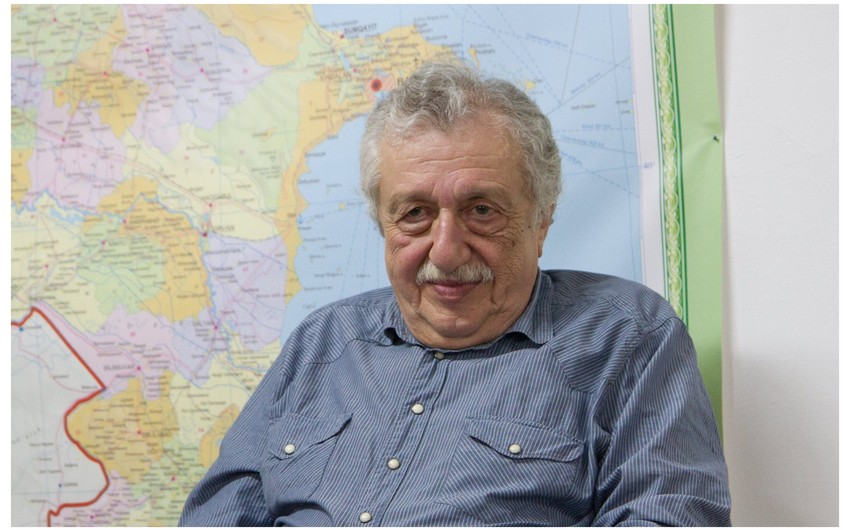 Azerbaijani journalists of the older generation remember their talented colleague - deputy editor-in-chief of the Sumgait Communist newspaper Mark Gorin. Gorin worked for the Sumgait newspaper for ten years, where he started as a correspondent and later became the head of the Russian desk. During this time, he graduated from the correspondence department of the faculty of film dramaturgy of the Gerasimov Institute of Cinematography (VGIK). In 1992, he moved to Israel with his family. There he worked in various media, dealt with issues of foreign and domestic policy. In an interview with Report, Mark Gorin, a columnist for the Israeli Russian-language TV channel Aleph-Bet, presented his understanding of Iran’s position in relation to Azerbaijan and shared his impressions of his recent trip to Azerbaijan.

- Recently, Iran has been making very harsh statements regarding Azerbaijan. Tehran has been conducting exercises on the border, which for three decades didn’t interest it at all, and much more. In your opinion, what is Iran concerned about today?

- I think Iran’s concern has been around for a long time and goes back centuries. But if we talk about the current situation, it is associated with numerous problems in this country. First of all, Iran is primarily irritated by Shiite-majority Azerbaijan, which has become a modern, civilized, rich, strong state, which implements an independent foreign policy, laid down by the doctrine of national leader Heydar Aliyev and successfully implemented by the current president of the country, Ilham Aliyev. This is the first reason.

Obviously, the second is a victory over Armenia and the new authority of Azerbaijan in the region. Iran is a longtime ally of Armenia, which is no coincidence. That’s because one of Iran’s goals is to weaken Azerbaijan. Here the reason is also known. There are approximately 35-40 million Azerbaijanis living in Iran who are attracted to independent Azerbaijan. In addition, Iran doesn’t like the rapprochement of Azerbaijan with other Turkic peoples.

Another important issue concerns the very difficult situation in which Iran has found itself in the international arena in terms of the Vienna talks on nuclear deal. The United States isn’t ready to accept Iran’s conditions. This factor cannot be ruled out, either, when explaining the current behavior of Iran, which you are talking about.

Finally, Israel’s assistance to Azerbaijan in the war with Armenia proved to be another additional irritating factor for Tehran. Actually, what kind of assistance are we talking about? It would be more accurate to call it active trade in the military sphere. It sharply increased Iran’s nervousness caused by the complete military defeat of the separatist entity in Nagorno-Karabakh and Armenia, which, in turn, were so diligently supported by Iran.

Iran, of course, cannot but know that Azerbaijan makes billion-dollar military purchases from our country, buying the latest equipment. This is another pretext for harsh statements, as well as the fact that the military budget of Azerbaijan exceeds the entire budget of the aggressor country. As for us, I’ll say it straight, and it’s not only me who says this here: “Israel doesn’t abandon its friends in trouble.”

The last reason is your country’s blocking of the routes of movement of Armenian trucks load of smuggled goods, where drugs occupy a considerable place, through the previously occupied territories of Azerbaijan with smuggled goods. The drugs were supplied to Armenia and further to Europe. The loss of such an item of income isn’t only irritating but also causes even stronger emotions and actions. John Bolton also noted at a meeting with Pashinyan that Armenia, which allows such a thing, doesn’t comply with the sanctions adopted against Iran.

- Why do you think Iran considers itself responsible for the security of Armenia?

- Iran doesn’t consider itself responsible for anything. But Iran benefits from assisting to Armenia for two reasons. On the one hand, Tehran believes that this won’t make Azerbaijan’s victory bigger. Secondly (this is my personal opinion), in this way, Iran plays up to certain European countries, the same France, which is obliged to pay attention to Armenia due to its internal electoral problems.

- Iran has verbally expressed support for our country more than once. But what strikes most is that the country representing itself as a defender of Muslim values ​​has never, even in words, condemned the destruction by Armenians of monuments of Muslim culture in the occupied territories. How should one assess such a position?

- I am not an expert in theology, but as a journalist and political scientist who closely monitors the situation in the Karabakh conflict, I clearly see that the position of the Iranian mullahs isn’t determined by the priorities of Islam and Muslim values. I would say that Shiite preachers are trying to use religion for political purposes. I have recently been to Azerbaijan, visited Karabakh, and saw how Armenian invaders set up a barn for pigs in mosques. It seemed that such sacrilege should have caused anger among the Iranian Shiites, but, as is known, this didn’t happen. Israeli journalists, secular people, were shocked at what they saw and expressed their indignation in the press, while the so-called defenders of Muslim values ​​remained silent. And this is the same Iran that wants to take a higher place in the Muslim world. It advocates for Israelis of Arab descent while subjecting national minorities in its country to complete discrimination.

- You have already touched upon the topic of Azerbaijani-Israeli relations and Iran’s reaction to them. But an even more interesting message sounded from the Iranian side: it turns out that Azerbaijan is a stronghold of Zionism. How would you assess this statement?

- This can only be regarded as disgusting and stupid cynicism. The only stronghold of Zionism is Israel itself. Friendly relations with Azerbaijan are built on a solid foundation - the life of tens of thousands of Jews who didn’t feel any discrimination, were and remain loyal to the country they consider their homeland. Here in Israel they are doing everything to help their homeland in difficult times, to be with it in sorrow and in joy. My life is an example of this. I studied in Ukraine, dreamed of becoming a journalist, they published my articles, noted my capabilities, but because of the ‘fifth column’ I couldn’t become a journalist in Soviet Ukraine. Only Azerbaijan accepted me, gave me the opportunity to achieve my dreams. In the Sumgait Communist newspaper, I started from scratch and reached the position of deputy editor-in-chief. There I became a professional. This is very dear to me. This is just one example, and there are hundreds and thousands of such examples. True, immigrants from Azerbaijan in Israel would very much like the opening of an Azerbaijani embassy there, but we understand the complexity of the geopolitical situation, and yet we believe that this will come true.

Israel doesn’t need any strongholds. It needs friends. Israel is friends with Muslim countries, and I think that this is for the benefit of both sides.