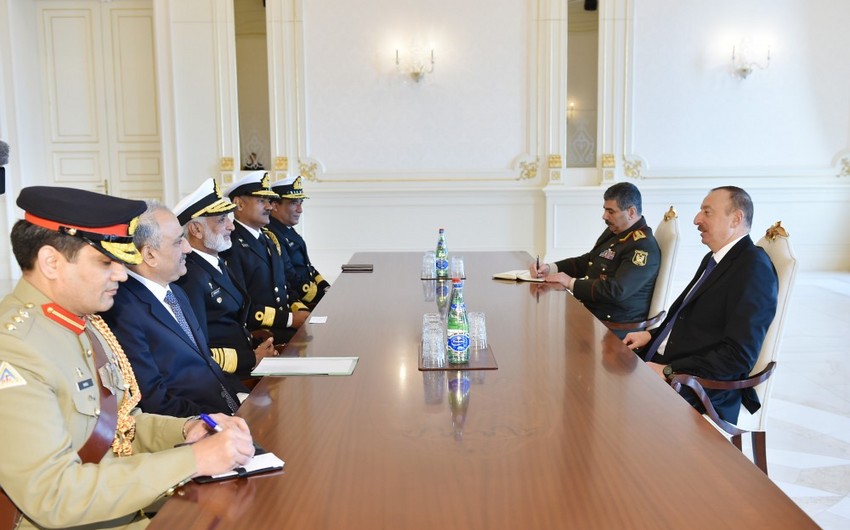 Baku. 14 January. REPORT.AZ/ President of the Republic of Azerbaijan Ilham Aliyev has received Chief of Naval Staff of the Pakistan Navy Muhammad Zakaullah.

Report informs, hailing political relations between Azerbaijan and Pakistan, President Ilham Aliyev said the two countries were close partners and allies, and their peoples enjoyed fraternal ties. The head of state recalled with pleasure a visit of President of the Islamic Republic of Pakistan Mamnoon Hussain to Azerbaijan, saying constructive discussions were conducted during the trip. Stressing the importance of expanding relations between the two countries in all fields, particularly in the military area, President Ilham Aliyev expressed hope that cooperation in this sphere would contribute to the strengthening of the bilateral ties even further. The head of state expressed confidence that the visit of Muhammad Zakaullah to Azerbaijan would contribute to the expansion of the relations in the military area.

Chief of Naval Staff Muhammad Zakaullah extended greetings and best wishes of Pakistani President Mamnoon Hussain and Prime Minister Muhammad Nawaz Sharif to the head of state. He said he was impressed by the beauty of Azerbaijan, especially Baku. Emphasizing that bilateral relations between Pakistan and Azerbaijan have historical, religious and cultural roots, Muhammad Zakaullah praised relations between the two countries` peoples. The Chief of Naval Staff noted the significance of strengthening the ties between Azerbaijan and Pakistan.