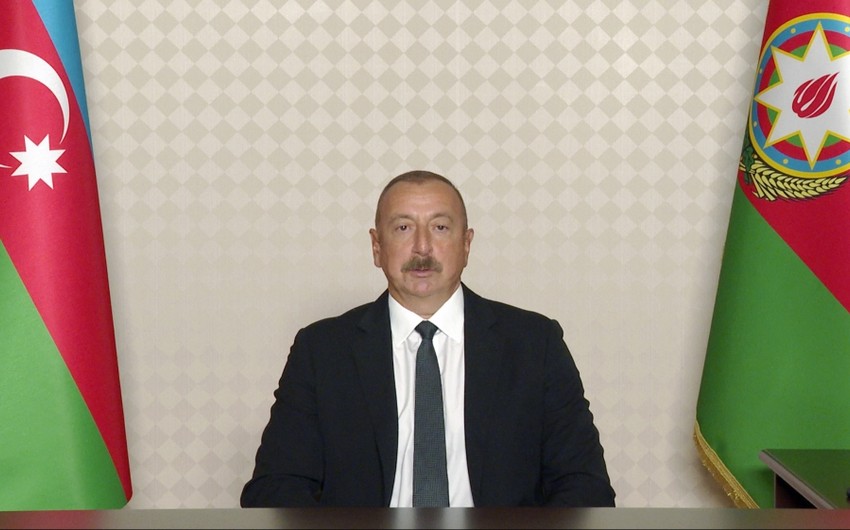 "I would like to hope that this is so, because Azerbaijan has repeatedly stated its readiness to start a dialogue with Armenia. It is not just about starting a dialogue, but also about the future peace agreement between Azerbaijan and Armenia. The war is over, the conflict has been resolved."

Report informs that on September 28, Azerbaijani President Ilham Aliyev said this in an interview with France-24 TV channel, while answering a question that "Exactly a year has passed since the beginning of the war between Azerbaijan and Armenia, which your country won in 44 days. For the first time since the end of the war, the foreign ministers of the two countries - Azerbaijan and Armenia - have met. Does this mean a resumption of dialogue between the two sides and hope for peace?"

"We must start fresh activities to make the region more predictable, stable and secure. The meeting of the foreign ministers of the two countries is a good indicator of these efforts. I hope this is not just a meeting, but the beginning of a new process between Azerbaijan and Armenia and will be a process of normalization of the relations and a process that will give a new dimension to broad cooperation in the South Caucasus region," he said.

Then in response to a question "Have you established contacts with the Armenian leadership - the Armenian prime minister to try to resume the dialogue and move towards peace?" the Azerbaijani president said:

"Since the end of the war in November last year, we have had only one chance to see each other. It was during a trilateral meeting organized by Russian President Vladimir Putin in Moscow in January. The purpose of the meeting was to plan the post-war events. We have not had other chance for a meeting. Probably, this was due to the pandemic or other reasons. However, Azerbaijan has never objected to any such high-level contacts, even during the war or even during the occupation. On the contrary, we believe that these contacts could respond to mutual issues and be a new starting point for the development of the region. Our position is crystal clear. We believe that the conflict is resolved, there should be no return to the past, there should be no revanchist signs in Armenia. We should talk about future, about peace and how to make the region more stable and more secure."

In response to "Are you ready to call Prime Minister Pashinyan to say these?" question, Ilham Aliyev said:

"Probably not, as you say. Usually, contacts between the leaders of the two countries were organized within the framework of the OSCE Minsk Group. They proposed the agenda, they organized meetings. In my presidential experience, I have never had a telephone conversation with any Armenian leader. This approach is probably not the right way to do so. But if the co-chairs of the Minsk Group propose such a meeting, we will of course not oppose it."