French MP: Azerbaijanis were expelled from their lands as a result of Armenian occupation

French MP: Azerbaijanis were expelled from their lands as a result of Armenian occupation "Azerbaijan can pressure on Armenia to leave Nagorno-Karabakh"
1655 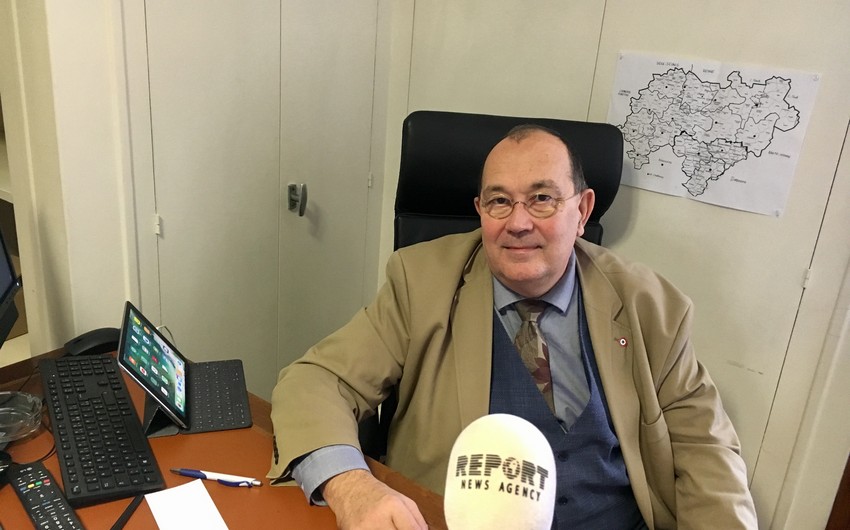 - How did you decide to join the France-Azerbaijan friendship group?

- I visited Azerbaijan 15 years ago through the World Bank for the first time. Azerbaijan's geopolitical position and its prospects of cooperation with France in this regard arouse interest in me to this country. At that time, I was aware of the workmanship of my colleague Jean-Francois Mancel, who was the head of the friendship group. Though we were not elected from the same party and despite the sharp differences in our political views, I became a member of this group because the fact that this friendship group was headed by a hardworking person testified to its activity, and I was not interested in the groups that was active only on paper.

Moreover, due to the conflict with Armenia, this region could be considered a problematic zone and this factor also drew my attention. Another reason was my close interest in former Soviet republics. After the collapse of the Soviet Union in this region, new issues emerged and new relationships were established and today we witness this process in the face of Ukraine.

- You have recently had meetings with refugees and internally displaced persons in Azerbaijan. What are your impressions?

- We held meetings with refugees and internally displaced persons in Azerbaijan initiated and organized by the Friends of Azerbaijan Association in France. These people were expelled from their lands as a result of occupation of these lands by Armenia. They are eager to return to their homes. They desire it with all their hearts and this is also natural. Our goal was to learn the actual situation on the spot. From a distance, one may think that 25 years have passed since occupation, so everything has been forgotten and they accepted their situation. Just the other way round, the sole desire of most of them is to return to Karabakh. This visit allowed me to understand this reality. Though among those internally displaced persons whom we met there were no people who lived in the camp or had a vagrant life, we also met people living in difficult situation or have a relatively comfortable lifestyle. It was very impressive to see those people.

- France is a co-chair of the Minsk Group. The Nagorno-Karabakh conflict has not been solved yet. What is the reason for this?

- The Minsk Group is interested in bringing Azerbaijan and Armenia together and holding meetings and discussions. However, the conflict will not be solved by anyone else. Neither Germany nor France nor the United States will send their troops to free Nagorno-Karabakh. The solution of the conflict is possible only on the basis of a political consensus. However, I see that this issue is in a stalemate, because Armenia avoids to cooperate on this issue. This is a fact. Unfortunately, this conflict has been protracted and any retention may increase the risk of a real conflict. I would understand Azerbaijan if it announces that "Armenia does not want to act so negotiations cannot be held in this situation." Azerbaijan can put pressure on Armenia to leave Nagorno-Karabakh. However, pressures in the current situation will not yield positive results. Armenia has many problems. There are political changes, even a bit of violence.

The Armenian government can say that "this is their fault” and take advantage of these pressures to make forget people about problems. Nationalism often arises from difficulties. If Armenia was a prosperous country like Azerbaijan, I would say that you will understand each other, because you have common interests. If your history, your culture crossed, one day you could belong to the same community: everyone in their own country but with common interest. However today, this issue acquires a complex form. As for international pressures, I have not observed any conflict that resolved in this way, whether it is a relationship with a big or a small state.

- What do you think about the "friendly charter" signed between the cities of France and the cities of the so-called "Nagorno-Karabakh Republic"?

- Local governments in France are free to do what they want. Even though they do not follow the French policy, it is difficult to prohibit their activity, not even to say impossible. Not many 'friendly charters' of this kind have been signed. Since there is gap in the law we cannot ban these documents. Since fraternity between the cities is carried out by the permission of the department heads, it was not possible to prevent it.

- How do you assess the current relations between the parliaments of Azerbaijan and France?

- Our relations were closer when the current vice-president of Azerbaijan, Mrs was the head of the Friendship Group. It coincides with the period of the previous government in France. During this period, we welcomed the Azerbaijani MPs several times and have had some joint activities. The activity of the Azerbaijani-French Friendship Group weakened when Mehriban Aliyeva left the leadership of the group and we had the new leadership 18 months ago. If we held 3-4 meetings during the year besides other activities, now we have held only one meeting within 18 months. The activity directly depends on the leader.

- What do you think about the current development of bilateral relations between our countries?

I have the impression that Azerbaijan is not included in the radar of the international policy of France: in any way, it is not in the spotlight. France as a co-chair of the OSCE Minsk Group is deeply concerned about the situation in the Nagorno-Karabakh conflict. Moreover, France has trade interests with Azerbaijan. However, except these two issues, I think that there is no strategic relationship between Azerbaijan and France, and it is very disappointing for me. Our relations are not bad, just not enough. However, there are many areas to develop between France and Azerbaijan. In a region close to the East and where there is still tension on the border with Iran, Azerbaijan can become a very interesting partner for France. Azerbaijan is a Muslim country, however it has own peculiarities, religion has developed. We can create a dialogue with Azerbaijan not only on this region of the world, but also about other regions of the world.

- You said that Azerbaijan is a Muslim country, but it has its own peculiarity. What did you mean?

- In other words, there is no obstacle for the people who practice other religions in Azerbaijan. There is religious tolerance in Azerbaijan. Everyone believes in his own religion, but there is secularization, not fanaticism. We live in France in this form: everyone believes in his own religion. However, there are no signs of religion in public places - on the streets, squares. Everyone carries his faith in his heart.

- In what areas can the prospects of cooperation between France and Azerbaijan be more beneficial?

- First of all, we should establish geopolitical relations. Then, I would say that we should develop cultural relations that are of interest in religion and in other respects. In my opinion, Azerbaijan can become an interesting partner not only for France, but for all Europe in this part of the world. Azerbaijan experienced many historical events. I consider that Azerbaijan can be a solid partner.