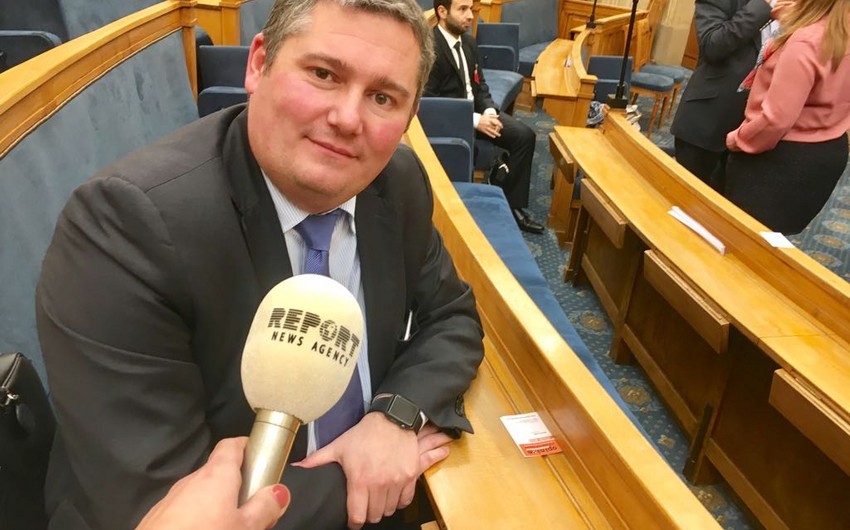 "There are countless areas where France and Azerbaijan can cooperate and realize projects, and I have made suggestions on it"

Paris. 19 January. REPORT.AZ/ The Western European Bureau of Report News Agency presents an interview with deputy of the French National Assembly and member of France-Azerbaijan Friendship Group Julien Borowczyk as below:

- What can you say about the current level of cooperation between Azerbaijan and France?

- We can make great achievements and we are working for that. As the deputy, I first became a member of the France-Azerbaijan Friendship Group and developed proposal plan. For this I sent one of my employees to Azerbaijan. The main occupation of the area where i was elected is agriculture. We have decided to cooperate with Azerbaijan in this field. For example, there is a tradition of keeping horse in our area. Horses are also of great importance to Azerbaijanis and integral part of the national tradition. There are huge differences between the horses of our region and Azerbaijan horses. From this point of view, it is possible to organize their exchange. In any case, the goal is to introduce Azerbaijani traditions in France and to continually expand our relations.

- What are the reasons hindering accurate delivery of truth about Azerbaijan to people in France?

- It would be a mistake to say that Azerbaijan is not know enough in France. Since Azerbaijan has regained its independence, it has taken very successful steps in this area. But with regret I want to note that Azerbaijan's geopolitical and geo-strategic position is very little known in France. Today, we must inform French population about the difficult geopolitical position of Azerbaijan and which countries are the main cause of this.

We should regularly inform people about the problems in the neighborhood of Azerbaijan and its position in the region.

The other difficulty is the dissemination of negative information about Azerbaijan and, in many cases, the false information provided by the Armenian lobby, causes misleading views and negative image on Azerbaijan.

I would like to mention another issue in this regard. Azerbaijan is well known in Paris and nearby areas, which is a positive phenomenon.But then again Armenian lobby can spread more lies in the Paris and surrounding cities.When it comes to different regions of France, the situation is quite different.Azerbaijan is less known in the remote regions of my country.But the positive side is that the activity of the Armenian lobby is weak or even not exists.Thanks to this, Armenians cannot spread traditional information against Azerbaijan.So, in these areas, we can build a stronger relationship.

- But how can we stop the negative information spread by the Armenian lobby in France?

- I think that opposing Armenian lobby is very hard question. Therefore, I do not want to face them. On the contrary, we need to strengthen the cooperation between Azerbaijan and France and intensify concrete measures within the framework of these bilateral relations. In that case, the population will be witnessing concrete works. Do you think that people who see concrete deeds would believe in the false, unfounded statements, touching the feelings of others? There are countless areas where France and Azerbaijan can cooperate and realize projects.