Foreign Minister met the First Deputy Prime Minister and Minister of Foreign Affairs of the Republic of Serbia, Ivica Dačić, on the sidelines of the 18th Summit of Heads of State and Government of the Non-Aligned Movement held in Baku, Report informs citing the press service of the Foreign Ministry of Azerbaijan.

The sides expressed their satisfaction with the mutual support enjoyed between the two countries within the international organizations. In this context, touching upon the Armenia-Azerbaijan conflict, Minister reiterated his gratitude for the principled position of Serbia regarding the soonest settlement of the conflict on the basis of sovereignty, territorial integrity and inviolability of internationally recognized borders of the Republic of Azerbaijan.

The Ministers expressed the importance of furthering mutual cooperation in different fields, particularly in the field of economy. It was underlined that the activities of the Joint Intergovernmental Commission on economic cooperation and organization of business forums between the Republic of Azerbaijan and Serbia would give an additional impetus to the fruitful use of the rich potential for the bilateral cooperation development, and agreed to intensify efforts to this end.

Minister Ivica Dačić expressed hope for the successful chairmanship of Azerbaijan in the NAM and further development of bilateral relations between the two countries and invited Elmar Mammadyarov to visit his country.

During the meeting, the sides also exchanged views on other regional security issues. 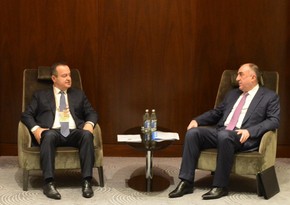