Elmar Mammadyarov: Azerbaijan stands by Turkey "Naturally the violent coup attempt against the legitimate government of the brotherly nation caused great anxiety in our society"
1184 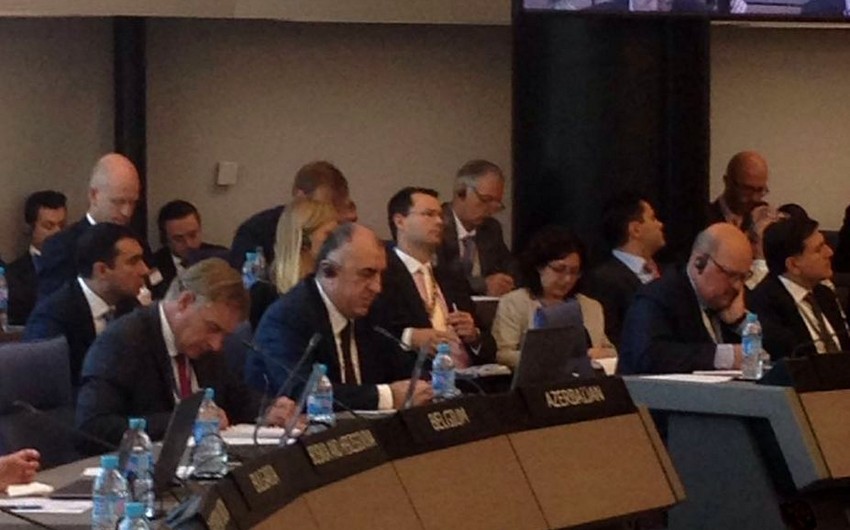 Baku. 7 September. REPORT.AZ/ Azerbaijani Foreign Minister Elmar Mammadyarov has delivered a speech at the 1263rd meeting of the Minister's Deputies of the Council of Europe.

"First of all, I would like to thank everyone who organize this meeting and provide us with this opportunity to come together today to display our full solidarity with the People and State of Turkey in the aftermath of an attempted military coup against one of the founding members of the Council of Europe.

I would also like to greet my esteemed colleagues and dear friend Mr. Mevlüt Çavuşoğlu, Minister of Foreign Affairs of Turkey.

From the very beginning, Azerbaijan expressed its serious concern and strongly condemned this crime perpetrated by one group against the Constitution and democracy in brotherly Turkey. By reiterating our solidarity with the People and State of Turkey we expressed our conviction that the situation would fully stabilize through unity of Turkish people and the State. Regretfully, the coup attempt took many lives and by using this opportunity I extend my deep condolences to the families and loved ones of those perished while preventing this crime.

Turkey plays an important role in enhancing and securing peace and sustainability in and beyond our region and therefore its own stability is of utmost importance for the entire region. Azerbaijan enjoys strong strategic partnership with Turkey based on the will of our People and State and our shared values. Therefore, naturally the violent coup attempt against the legitimate government of the brotherly nation caused great anxiety in our society.

We commend the Estonian Chairmanship for clear condemnation of the attempted coup and for visiting Turkey in the aftermath of the tragic events to express support for the leadership of Turkey and demonstrate solidarity with the Turkish people. These acts were not only necessary for supporting the legitimate government in Turkey, but also for defending the common values the Organization stands for.

We believe that this very important political support should be continued by providing Turkey with any assistance it needs in the post-coup period through the valuable mechanisms and tools the Council of Europe has at its disposal. Council of Europe can, without a doubt, play a constructive and important role in this process. Turkey has to enjoy full and unequivocal support of the members of international community. We have an obligation to stand with Turkey against the threat to its democracy.

On behalf of my government I wish to stress that Azerbaijan stands by Turkey and expresses its unequivocal support for the Government of Turkey in all its domestic and international endeavors", the statement ends.