Draft resolution on "Situation on Occupied Territories of Azerbaijan" included in 70th session UN GA session agenda Totally, 170 points were included in the agenda of the session
3195 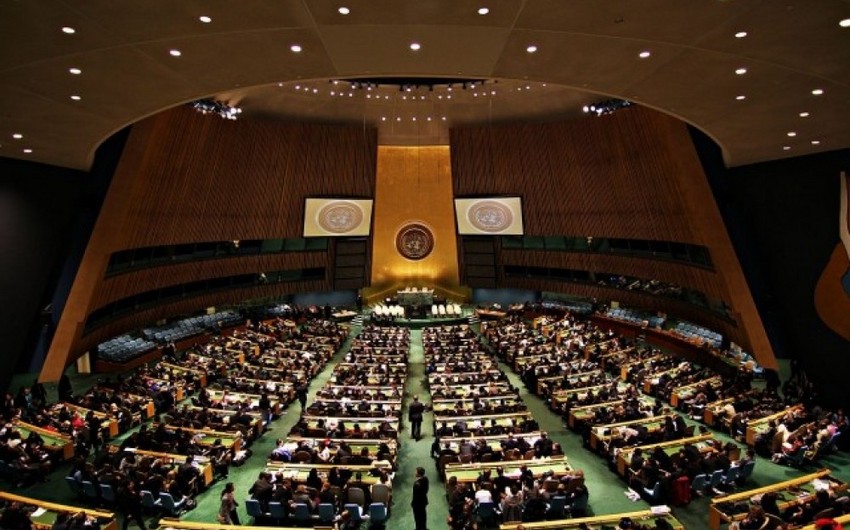 Baku. 16 September. REPORT.AZ/ Drafts of resolutions on "Situation on occupied territories of Azerbaijan" and "The prolonged conflicts on space and their consequences for an international peace, safety and development" are included in the draft agenda of the 70th session of the UN General Assembly. Report informs citing the press service of the United Nations, the drafts of resolutions are included in the agenda of current session under 40 and 35 points because they were not discussed during the previous 69th session of UN General Assembly.

Totally, 170 points were included in the agenda of  the session, including such issues as peace and safety, development of Africa, disarmament, control over drug trafficking,  fight against the international terrorism etc.

The official opening of the 70th session of the UN General Assembly  took place in New York on September 15.

The United Nations General Assembly is the principal advisory body of the UN. Representatives of all member states are involved, each of them has one vote. Decisions on important questions, such as the issues on peace and security or reception of new members demand the majority in two thirds of votes. Decisions on other issues are made by the simple majority. Annually during the period from September to December the hard work of session of Assembly is conducted. Then they hold meetings if there is a need.