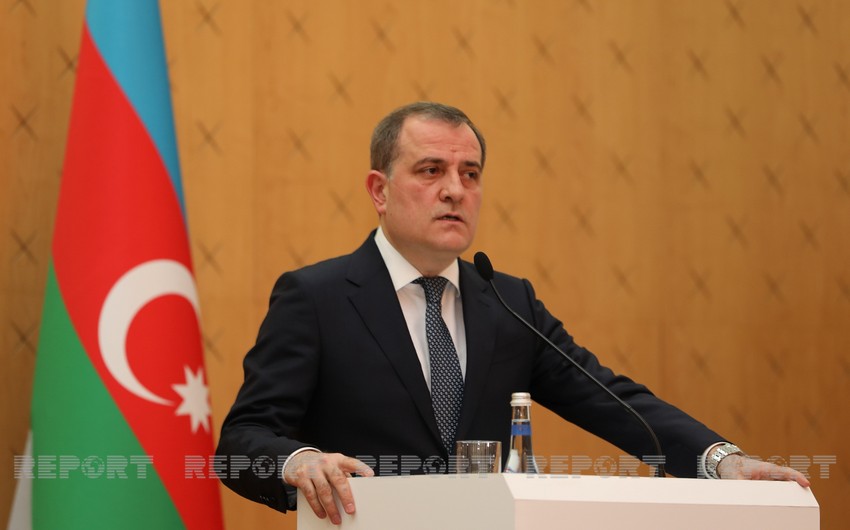 The meeting was attended by 36 officials, including foreign ministers and other authorized representatives of the group's member countries, as well as representatives of international organizations. As a result of the meeting, the Ministerial Declaration was adopted.

Minister Jeyhun Bayramov addressed the event chaired by Deputy Prime Minister, Minister of Foreign Affairs of Kazakhstan Mukhtar Tileuberdi: "The development of effective and reliable transit routes requires broad cooperation of the corridor countries. These transport corridors are not only infrastructure projects. They are also meant to promote free trade, exchange technology, and innovation, and establish mutually beneficial partnerships between countries along the corridor. In this sense, we call on all our partners, including the private sector, to fully exploit the potential of the corridors.

"Over the past few years alone, Azerbaijan has invested billions of dollars in its transport infrastructure. Thanks to these steps, Azerbaijan now ranks 27th worldwide for the quality of roads, 11th for the efficiency of railway services, and 12th for the efficiency of air transport services, according to the World Economic Forum (WEF). With a throughput capacity of 6.5 million tons of cargo per year, the Baku-Tbilisi-Kars railway makes it possible to reduce transportation time between China and South-Eastern Europe by 70%. Today the Baku international sea trade port's cargo capacity is 10 million tons per year, including 100 thousand containers. Moreover, with over 260 vessels at its disposal, Azerbaijan also owns the largest commercial fleet in the Caspian Sea. Azerbaijan has put a lot of effort into building the necessary infrastructure for the role of a logistics and transit hub, and this process continues nowadays.

"The resolution of the Armenia-Azerbaijan conflict opens up new perspectives for regional cooperation, development, and prosperity through the normalization of relations between Armenia and Azerbaijan. The 10 November 2020 joint statement has been further complemented with a trilateral Azerbaijan-Russia-Armenia statement of 11 January 2021, which deals explicitly with the opening of communications in the region. Restoration of the contacts is a win-win situation for all the partners and raises the importance of the wider Caspian Sea geography. The emerging transport hub in our liberated territories will strengthen the position of the entire South Caucasus within the scope of Trans-Eurasian transport projects. The new landline – the Zangazur Corridor between Azerbaijan and Turkey, will serve as a supplement to the existing trade and transport connectivity."

The LLDC Group was established to promote practical transit cooperation between developing countries without direct access to the high seas, thereby contributing to their integration into the world economy and the achievement of the Sustainable Development Goals.

The LLDC group unites 32 countries with different levels of development, mainly from Asia and Africa and partly from Europe and South America.