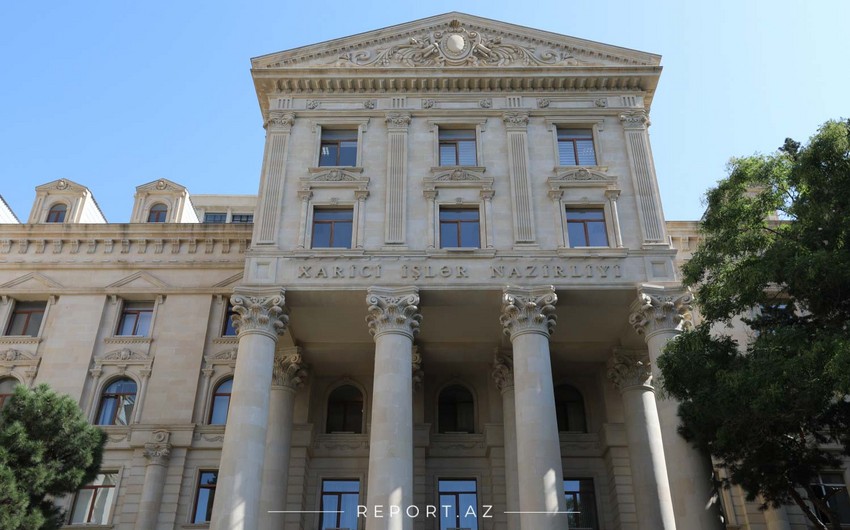 "We do not accept the allegations about any third forces near the Azerbaijani-Iranian border, the provocative attempts of these forces since these views are groundless. In general, the existence of any forces in the territory of Azerbaijan, including terrorist elements, which could pose a threat to our state or neighboring countries, cannot be a subject of discussion. Unfortunately, during the 44-day war, some parties made similar completely groundless claims. We stated then, and we reiterate now, that such allegations are baseless, and no evidence has been presented to the Azerbaijani side so far.

"The inviolability of internationally recognized borders is one of the fundamental principles that Azerbaijan has always been guided by. Azerbaijan has suffered for decades from the military occupation of part of its territory and the violation of international borders. In particular, more than 130 km of our border with Iran has been under Armenian occupation for many years. Unfortunately, over the years, we have not heard such a strong reaction from the friendly state of Iran to the occupation of part of our border.

"In general, Azerbaijan supports the establishment of relations with all countries based on respect for each other's international borders, and it is the unchanging position of our country. We, in particular, have stated our readiness to normalize relations with Armenia on the basis of this fundamental principle of international law and to begin negotiations on the delimitation of borders. The process of delimitation of the Azerbaijani and Armenian boundaries is a bilateral issue, and the recent positive signals from the other side give hope for the constructive development of the process.

"As for the thought of outside intervention in Azerbaijan, we would like to emphasize that the Republic of Azerbaijan has always pursued an independent foreign policy based on national interests and has repeatedly proved it with concrete steps over the past 30 years. The development of friendly and good-neighborly relations with neighboring countries is one of the main priorities of our foreign policy, and we are taking continuous steps in this direction.

"We would also like to note that Azerbaijan is very sensitive to the issue of Islamic solidarity and, as it is well known, is distinguished by its active position in the Organization of Islamic Cooperation (OIC). Over the past decades, our country has focused on the issues of destruction, looting, and desecration of the heritage of Islamic history and culture in the territory of Azerbaijan, and we appreciate the support of the OIC member states in this just cause.

"We believe that the Islamic Republic of Iran is also interested in ending the occupation of Azerbaijani territories, halting illegal actions of Armenia in the region, including large-scale stockpiling of weapons, preventing illegal economic and other activities, drug smuggling, training of terrorists, insult and destruction of Islamic religious and cultural monuments, ensuring the return of Azerbaijani IDPs to their ancestral lands after 30 years of longing, and ensuring stability and security in the region," the Foreign Ministry spokesperson said.