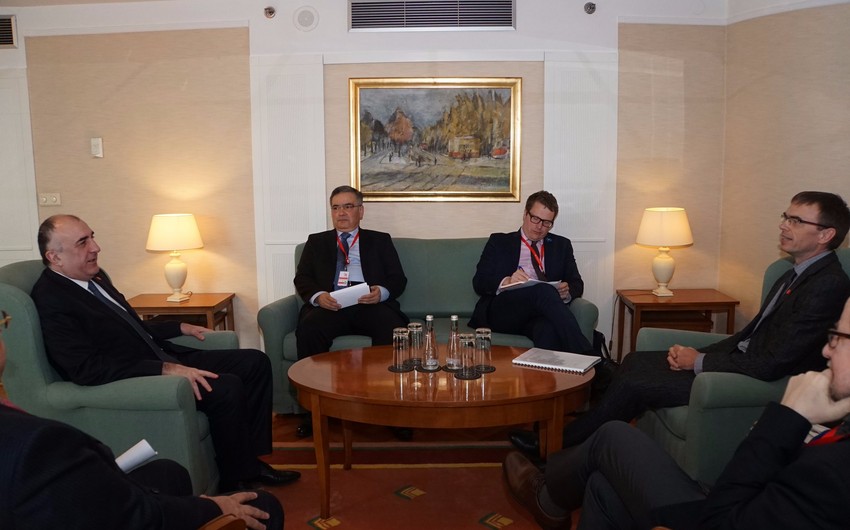 Baku. 12 April. REPORT.AZ/ Foreign Minister Elmar Mammadyarov met with Sven Mikser, Minister of Foreign Affairs of the Republic of Estonia within the frameworks of the Foreign Ministerial meeting of the Visegrad Group and Eastern Partnership countries.

Report was informed in the press service of Azerbaijani Ministry of Foreign Affairs.

At the meeting, the Ministers stressed the successful development of bilateral relations in various fields between Azerbaijan and Estonia and exchanged their views on the ways to further expand the cooperation.

Minister Elmar Mammadyarov stated that the meeting of the Intergovernmental Commission was successfully held in Baku on April 7 of this year, and the discussions created new opportunities for cooperation in the fields of information technology, tourism, agriculture and other areas.

Noting his intention to soon visit Azerbaijan, Sven Mikser gave information about Estonia's European Union (EU) presidency and stressed that Estonia supports the development of relations between Azerbaijan and EU.

Elmar Mammadyarov mentioned that the work on the draft Partnership Agreement is underway. Minister also informed his interlocutor about the negotiations process on the settlement of the Armenia-Azerbaijan Nagorno-Karabakh conflict and emphasized that in order to resolve the conflict and to create an environment for regional cooperation armed forces of Armenia have to withdraw from the occupied territories of Azerbaijan. He also added the importance of applying unified approach by EU to the issue of territorial integrity and sovereignty of countries within their internationally recognized borders. Elmar Mammadyarov said that changing borders of states by use of force is unacceptable and this principle should be observed universally.

Touching upon East-West and North-South transport corridors, Minister Elmar Mammadyarov noted that Estonian companies may also get benefited from the opportunities provided by these routes.

At the meeting, the parties discussed other regional and international issues of mutual interest.