Azerbaijan sends letter to UN Secretary General on border issue A letter from the Permanent Representative of Azerbaijan to the UN Yashar Aliyev has been sent to the UN Secretary-General. 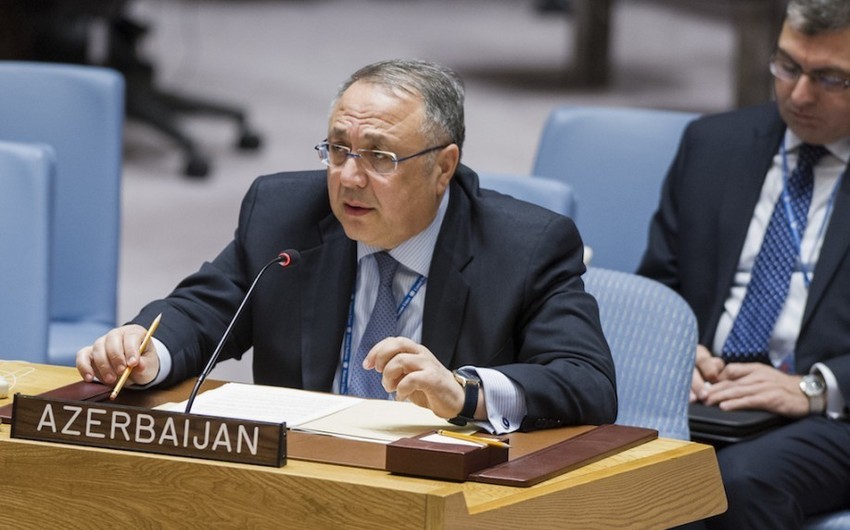 According to Report, the letter reads that after the collapse of the USSR in 1991, both Armenia and Azerbaijan gained independence within the borders of their former Soviet republics under international law. In the agreement on the establishment of the Commonwealth of Independent States signed on December 8, 1991, and in the Alma-Ata Declaration of December 21, 1991, all the signatories, including Armenia and Azerbaijan, undertook to respect the "inviolability of existing borders." Since then, Azerbaijan has repeatedly stated its commitment to this principle, which defines the rules for determining the borders of new states.

Aliyev writes that in late 1991 and early 1992, Armenia unleashed a full-scale war against Azerbaijan and occupied a large part of its sovereign territory. In 1993, the Security Council adopted four resolutions, 822 (1993), 853 (1993), 874 (1993), and 884 (1993), condemning the use of force against Azerbaijan and the occupation of its territories, and the sovereignty and territorial integrity of Azerbaijan and reiterating its respect for the sovereignty and territorial integrity of Azerbaijan, the inviolability of its internationally recognized borders and the inadmissibility of the use of force to gain territory. The Security Council demanded the immediate, complete, and unconditional withdrawal of the Armenian occupying forces from all occupied territories of Azerbaijan.

"However, Armenia did not fulfill these basic requirements. On the contrary, Armenia continues to violate the territorial integrity of Azerbaijan, repeatedly denying the mention of this principle in international documents and the validity of the rule mentioned above, which ensures the international legitimacy of the border between the two countries. It is obvious that such actions and such a position of Armenia cannot deprive Azerbaijan of the right to territorial integrity. We have made consistent efforts over the years to end the occupation and resolve the conflict through negotiations. However, Armenia has not given up its efforts to maintain and strengthen the consequences of the illegal use of force and has constantly resorted to various provocations. As a result, in late September 2020, Azerbaijan launched a counter-offensive in response to another armed attack by Armenia, completing the operation and liberating more than 300 cities, towns, and villages, including the Gubadli and Zangilan regions bordering Armenia. In accordance with the terms of the above-mentioned trilateral statement, the Armenian armed forces were withdrawn from the territory of two more border regions - Lachin and Kalbajar, and were returned to Azerbaijan," the letter reads.

The Azerbaijani diplomat's letter further states that Azerbaijan and Armenia are working to clarify the borderline between the two countries based on relevant official maps. This process is carried out through direct technical contacts between the parties with the participation of border services. Such relations have helped resolve border issues in the liberated Gubadli, Kalbajar, and Zangilan regions of Azerbaijan. In addition, in good faith, Azerbaijan allows Armenian citizens to use the Gorus-Gafan highway, part of which passes through the territory of Azerbaijan after the demarcation of the border.

Against this background, there is no doubt that the provocative campaign launched by Armenia in connection with the situation around Garagol is mainly aimed at internal goals in the run-up to the early parliamentary elections to be held in Armenia in June amid a severe political and economic crisis. In this context, propaganda of hatred for Azerbaijan and revanchist slogans are the only incentives offered by the warring parties - those who started the war with Azerbaijan in the early 1990s and the current authorities which lost that war 30 years later.

In addition, after occupying the territory of Azerbaijan for thirty years, in the current situation where there is no border regime between the two countries, Armenia still does not accept the need to respect the borders of the neighboring state and continues to violate its territorial integrity. The spread of forged documents and falsified historical versions on behalf of a non-existent organization, the commemoration of settlements in the internationally recognized territories of Azerbaijan under various false names, the resumption of revanchist efforts ... - many such examples can be shown.

All border issues must be resolved through a communication channel established between the border authorities of the two countries. The leadership of the State Border Service of Azerbaijan has been in the region since May 12, 2021, and talks are underway to normalize the situation around Garagol. Azerbaijan has provided all the necessary information to international partners who consider it important to listen to both sides. Armenia continues to confuse the international community. Therefore, we must not forget that the practice of falsification and fabrication has long been characteristic of Armenia. Despite numerous indisputable facts, the country denies decades of aggression against Azerbaijan, occupation of its territories, the expulsion of hundreds of thousands of civilians, destruction and looting of occupied regions and cities, and killing of thousands of Azerbaijani civilians during the conflict.

The end of the letter notes that Azerbaijan does not claim the lands of any state but will not give an inch of its territory to anyone. Azerbaijan supports the normalization of interstate relations between the two countries based on mutual recognition and respect for each other's sovereignty and territorial integrity within the internationally recognized borders and expects the same position from Armenia.