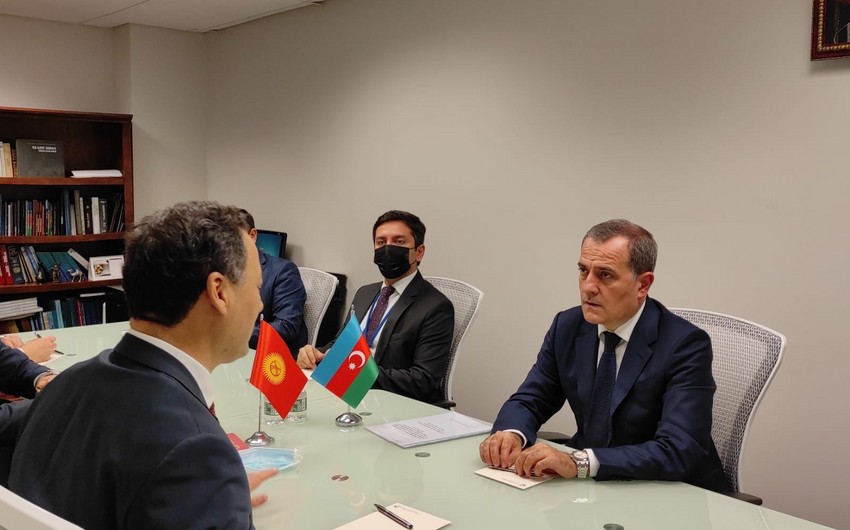 Report informs, citing the Foreign Ministry, that the sides stressed the historical ties and friendly relations between Kyrgyzstan and Azerbaijan, the successful development of relations in the bilateral and multilateral plane, and exchanged views on the prospects for expanding these relations during the meeting.

The parties also voiced mutual satisfaction with the development of cooperation in expanding legislative framework, as well as in political, economic, humanitarian field, education, tourism, agriculture, culture, and other spheres.

They noted that the high-level visits between the countries would promote the further development of relations.

At the same time, it was stressed that the sides maintain effective cooperation within international organizations.

Bayramov provided the other side with detailed information about the latest situation in the territories liberated from occupation as a result of the 44-day war, the large-scale destruction committed by Armenia in these areas, the destruction of historical and cultural heritage, the threat of landmines, as well as the ongoing reconstruction process.

The sides also exchanged views on opportunities for expanding bilateral cooperation and celebrating the 30th anniversary of the establishment of diplomatic relations next year.

Kazakbayev asked to deliver a congratulatory letter from the President of Kyrgyzstan on the 30th anniversary of the establishment of diplomatic relations between Kyrgyzstan and Azerbaijan.

The sides also discussed other issues of mutual interest, including regional matters and international security.