Foreign Ministry: Zohrab Mnatsakanyan's statements are complete nonsense Armenia did not conceal its aim to strengthen the results of ethnic cleansing carried out in the occupied Nagorno-Karabakh and surrounding regions of Azerbaijan. 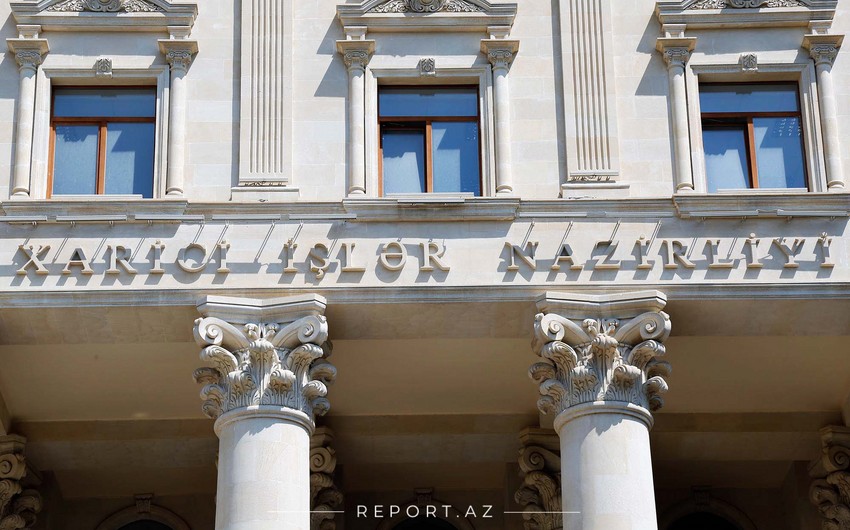 It is ironic for the Foreign Minister of a country to talk about creating an atmosphere of peace in the region that has been occupying the internationally recognized territories of the neighboring country for almost 30 years. A country that violated fundamental principles of international law and a directly impeded settlement of the conflict through negotiations and served to increase tensions in the region with its actions and statements.

The steps taken by the Armenian military-political leadership undermining the essence of the talks are a significant obstacle to the creation of the "atmosphere conducive to peace" mentioned by this country's Foreign Minister.
Only the Armenian side's actions over the past one and a half months clearly show the provocative nature of this country.

On July 12-16 of this year, carrying out another military provocation in the direction of the Tovuz region of the border between the two countries, Armenia attempted for another pre-planned attack on the Azerbaijani positions. The Azerbaijani Army resolutely prevented an attempt for a new act of aggression by Armenia.

After the horrific explosion in Beirut, Armenia, willing to use the situation for its nefarious purposes, announced a plan to illegally settle ethnic Armenians from Lebanon in Azerbaijan's occupied territories. Armenia did not conceal its aim to strengthen the results of ethnic cleansing carried out in the occupied Nagorno-Karabakh and surrounding regions of Azerbaijan.

Following unsuccessful provocations in the Tovuz, the Armenian military-political leadership resorted to other incitements to compensate for this failure. On August 23, a sabotage-reconnaissance group of the Armenian armed forces was prevented from provoking an attempt on the line of contact between the Azerbaijani and Armenian armed forces in the direction of the Goranboy region of the Republic of Azerbaijan, and the group's leader was neutralized.

Finally, Armenian Prime Minister N.Pashinyan's visit to the occupied city of Khankendi on August 29, meeting with "representatives" of the puppet regime established there and visiting Armenian military units in the occupied territories of Azerbaijan demonstrated once again that Armenia is an aggressor and pursues an annexation policy.
After all this, I wonder what kind of peace, or what proposals and initiatives to reduce tensions in the region Z. Mnatsakanyan is talking about?

The reasons for the vandalism and hate crimes committed against Azerbaijanis in various countries by the representatives of a government that supports terrorism at the state level, and where the younger generation was brought up based on the racist ideology of "Njdeism" and the values of fascism, are well known to all. Therefore, these views of the Armenian Minister correlating ethnic conflict prevention in foreign countries with the demonstration of political will in resolving the conflict are nonsense because Armenia has not been able to demonstrate this political will for years.

To ensure sustainable peace in the region, the withdrawal of the Armenian occupying forces from the internationally recognized territories of Azerbaijan and restoration of the rights of the displaced people of these lands are imperative. Armenia must finally show political will and take concrete steps in this direction.