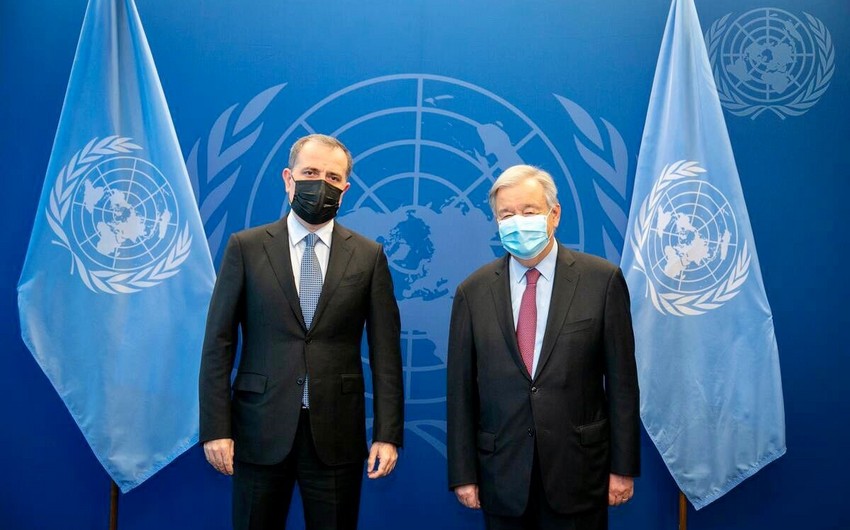 During the meeting, the sides exchanged views on cooperation between Azerbaijan and the UN, future activities, and other issues on the agenda.

Jeyhun Bayramov congratulated Antonio Guterres on his election as UN secretary-general. The sides then discussed the latest situation in the region.

The Azerbaijani minister informed the UN secretary-general about the possibility of normalization of relations between Armenia and Azerbaijan with strict adherence to the principles of international law, as well as the situation in the liberated territories, large-scale destruction done by Armenia, and the threat of landmines.

The minister also noted that Armenia has so far refused to provide any information about the 4,000 Azerbaijanis who went missing during the first Karabakh war, emphasizing that this is unacceptable.

Recalling with satisfaction his visits to Baku and meetings with President Ilham Aliyev, Secretary-General Antonio Guterres asked Jeyhun Bayramov to convey his greetings and best wishes to the President of Azerbaijan Ilham Aliyev.

Antonio Guterres hailed the initiatives of global significance against the COVID-19 pandemic, put forward by the Azerbaijani president as chairman of the Non-Aligned Movement. The secretary-general also praised the work done at the national level in Azerbaijan through the implementation of the Sustainable Development Goals, and expressed the UN's interest in further deepening cooperation with Azerbaijan in this area.

The secretary-general also stressed the importance of the special session of the General Assembly dedicated to the fight against the pandemic, initiated by the President of the Republic of Azerbaijan.

He stressed the importance of eliminating the humanitarian consequences of the Armenian-Azerbaijani conflict and ensuring lasting peace and security in the region.

The sides also exchanged views on other issues on the UN agenda and of mutual interest.