President of European Olympic Committee: "Armenia to participate in Baku-2015 European Games as a team"

President of European Olympic Committee: "Armenia to participate in Baku-2015 European Games as a team" "Currently, the fantastic work is being done and I am sure that the Games will leave a great mark on the history"
933 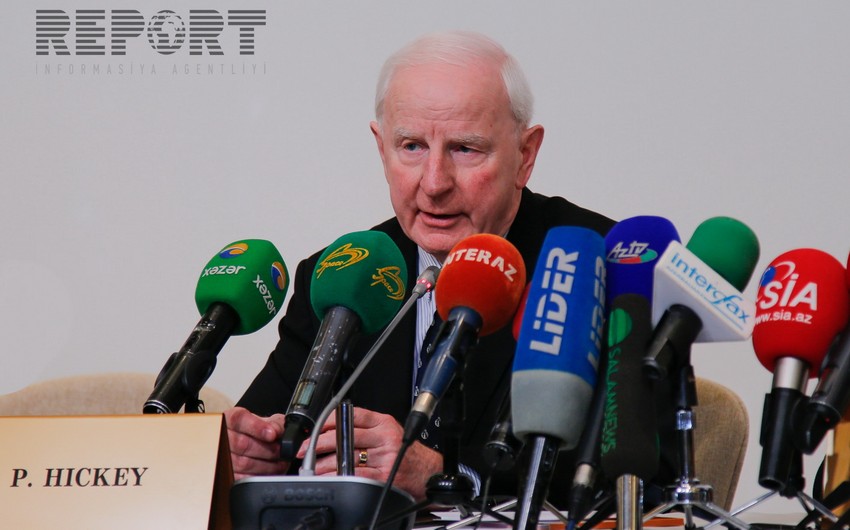 Baku. 22 November. REPORT.AZ/ The press conference devoted to the results of General Assembly of European Olympic Committee (EOC) in Baku was held. Report informs, the president of EOC Patrick Hickey stated that Azerbaijan differs for its exemplary organizational activity.

He stated that the excellent condition was established for all participants in the process of General Assembly. The discussions were made openly in two-day meeting. According to him, Baku-2015 First European Games were in the spotlight in the meeting. In this regard, the comprehensive presentation was held: "Many Olympic cities were provided with a 7-year period. However, BEGOC has done a lot of work for 2 years and the workdone is estimable. We knew that it is difficult to find better candidate than Baku while thinking about holding the European Games in Valencia, Spain in 2007.

I was not mistaken. Currently, the fantastic work is being done and I am sure that the Games will leave a great mark on the history. A number of volunteers, experts and professionals work here. It means that the city will leave a great sport legacy. We do not want to do the work that demands a lot of costs. The first games will be progressive. IOC president Thomas Bach will attend the opening ceremony with his team."

According to Hickey, there is no need to raise the prestige of the European Games: "European Games are not duplicate of Olympic Games. In fact, we considered the first games as an experiment. However, in contrast to the expectation, it was applied for not 8-10 but 20 of types. Even if 5-6 additional types wanted to be represented in the European Games. We said that we could not place them on the list. It will be important to these games to win Olympic license. For example, there is such a system in judo that it is too expensive to get a license. It needs to participate in a number of games and score rating points.

The athletes will be able to get a license by attending one competition in the Games. European athletes won a large number of medals, almost 70 percent of them till Beijing Summer Olympic Games in 2008. After those Olympic Games, we won few medals. In other words, our continent is going to lose its reputation. In this regard, European Games will play a great role to raise our prestige. The National Olympic Committees of different countries support us.

The president of EOC also noted that Armenia will also attend the First European Games as a member of the Committee: "Two members of Armenian Olympic Committee took part in General Assembly. They also confirmed that they will participate in the Games. Also, they expressed their gratitude for the meeting. Armenia will attend the Games as a team. I hope that, they will be welcomed in Baku as other representatives.

Hickey said that currently, the negotiations are hold with 6 cities for II European Games: "Games will be held in 2019. We decided to hold innovative Games and not to apply the same format like Olympic Games while thinking about this idea 8 years ago. We want to hold European Games in more interesting countries."