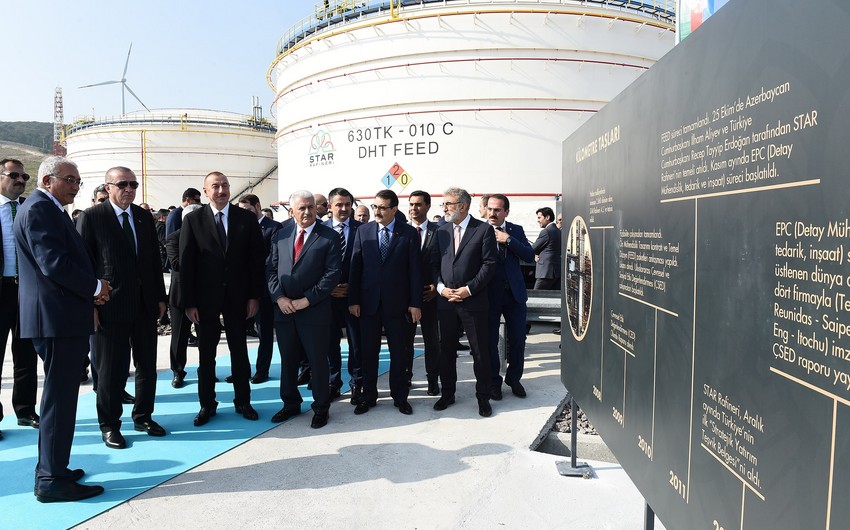 Report informs that  the oil refinery was inaugurated following the speeches.

During the opening ceremony of the STAR oil refinery in Izmir, President of Azerbaijan Ilham Aliyev and President of Turkey Recep Tayyip Erdogan watched the plant area from the terrace.

Report informs that the heads of state were informed about the works carried out at the STAR oil refinery.

Then a souvenir photo was taken.

A video featuring the historical significance of the plant was first demonstrated at the opening ceremony of the STAR oil refinery.

An opening ceremony of the STAR Oil Refinery (SOCAR Turkey Aegean Refinery) of the State Oil Company of Azerbaijan (SOCAR) is being held in Aliaga, Izmir, Turkey.

Report informs that the ceremony is being attended by Azerbaijani President Ilham Aliyev, Turkish President Recep Tayyip Erdogan, SOCAR President Rovnag Abdullayev and state and government officials from both countries.

The foundation of the STAR Oil Refinery was laid down by Azerbaijani President Ilham Aliyev and Turkish President Recep Tayyip Erdogan on October 25, 2011. The refinery was constructed by a consortium comprising “Técnicas Reunidas” (Spain), “Saipem” (Italy), “GS Engineering & Construction Corp” (South Korea) and “Itochu” (Japan). The total cost of the project is $6.3 billion.  STAR has the first Strategic Investment Promotion Document of Turkey. The capacity of the refinery is 10 million tonnes of crude oil per year. The plant is planned to carry out processing of such oil grades as Azeri Light, Kerkuk and Urals.