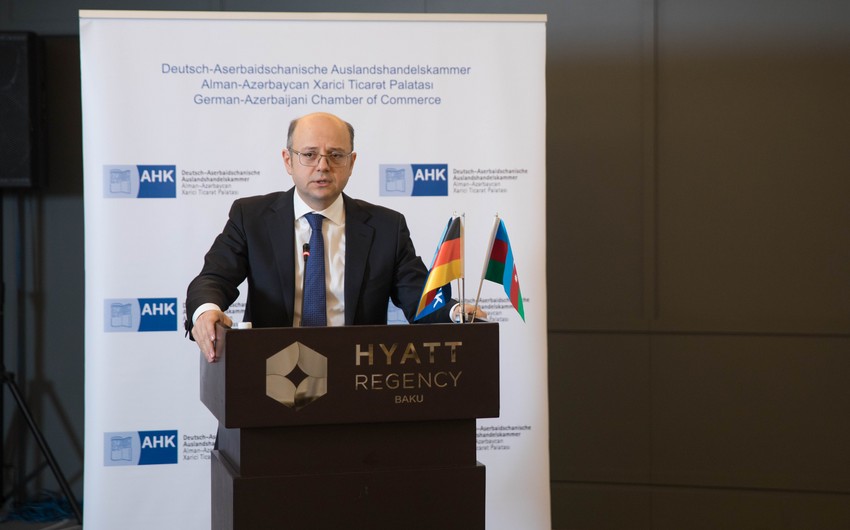 Report was informed in the AHK press service.

The first AHK-Impuls of this year was dedicated to the topic of energy. Minister of Energy of the Republic of Azerbaijan, Mr. Parviz Shahbazov attended the event as an honorary guest and made a presentation about “The future of energy in Azerbaijan”. Mr. Shahbazov drew attention to the energy strategy implemented by Azerbaijan since 1994, and its achievements. He emphasised that the current priority of Azerbaijan is the production of petrochemicals and the expansion of their export potential.

Further commenting on Azerbaijan’s policy in the power sector, Mr. Shahbazov mentioned modernisation of the power sector, ensuring efficiency and environmental requirements, the development of alternative and renewable energy sources, and making this field attractive to domestic and foreign investments as the tasks to be fulfilled in the power sector. The minister concluded his speech by making remarks on current reforms implemented in the energy sector. He pointed out that the implementation of the measures identified in the Strategic Road Map on Utilities Development are in progress and efforts are being made to liberalise the energy market, create a competitive environment for electricity generation and consumption.

Minister’s speech was followed by the presentation of Dr. Michael Hilmer, Senior Vice-President of Gas Supply Division South / Caspian Region, Uniper Global Commodities SE on the projects of the company in Azerbaijan. Mr. Hilmer informed the participants about the past and future projects of the company and a successful joint venture with SOCAR on energy efficiency since 2016. He made his final remarks on the partnerships of the company and stressed that it will strengthen ties and identify new joint business opportunities.