"Every country should pay attention to diversification and security in energy issue," Kent D. Logsdon, Principal Deputy Assistant Secretary, Bureau of Energy Resources, U.S. Department of State, said at a meeting with journalists in Austin, Texas.

Today, alternative solutions in energy are actual for both countries having access to energy and producing hydrocarbon. In this sense, many countries pay attention to diversification, take certain steps so they don’t depend on one source, same type of energy.

The issue of diversification of energy sources, types and transportation routes were one of the key topics at a tour on ‘Energy Security is National Security’ organized by the U.S. Department of State bureau of Energy Resources and Foreign Press Centers, which was attended by the journalists of a number of countries.

Kent D. Logsdon spoke about the importance of energy security and underlined the diversification: "Every country should pay attention to diversification and security. Dependence on one source and same energy is always a threat to any country. Energy security is an issue that it must be perceived as a national security."

He also noted that the Bureau of Energy Resources supports diversification and one of its goals is to ensure energy security of the U.S. and its partners by supporting diversification of energy sources, transportation and routes.

At the event ‘Advanced Energy Course’ held in the University of Texas at Austin, diversification of energy types, use of Texas methods in use of renewable energy, diversified portfolio of the energy system were discussed, and it was noted that the energy is important in US national security and main factor in the global diplomatic efforts of the country.

Texas is one of the main centers of the US on oil and gas production and export, however, renewable energy of the country.

Use of renewable energy in Texas

Becky Klein, Principal of Klein energy LLC, an energy consulting company based in Austin, Texas, says that although Texas continues to export oil and gas, it will consume more renewable energy.

Senior energy reporter for the Wall Street Journal, author of ‘Superpower’ Russel Gold thinks that the share of renewable energy and natural gas in the U.S. energy balance will increase. According to him, renewable energy sources in the balance is close to 10 percent, nuclear energy to 20 percent, coal to 20 percent, while natural gas accounts for the remaining part: "I think the share of coal will continue to decline, nuclear energy will drop slightly."

What is the situation in Azerbaijan?

"Relevant measures are being taken for fulfillment of tasks given upon the Azerbaijani President’s order #1209 on acceleration of reforms in energy sector dated May 29, 2019’. A bill on ‘Use of renewable energy sources in electricity production’ has been developed.

Azerbaijan’s total energy production capacity is 7,546 mWh. Capacity of the power stations on renewable energy sources, including large hydro power stations, is 1,276 mWh, which makes 17% of the total capacity. 92% of electricity is generated from natural gas. The share of renewable energy sources in electricity production is 8%. This figure is planned to reach 30% by 2030.

Proposals have been prepared for promotion of use of renewable energy sources, creation of favorable investment atmosphere in this field and support of private entrepreneurial activity. Azerbaijan is cooperating with international companies on development of renewable energy.

Kent D. Logsdon said that US can cooperate in the process run by Azerbaijan for wider use of renewable energy sources.

He also noted that they could discuss what frame would be better for involvement of US companies in Azerbaijan on renewable energy sources. 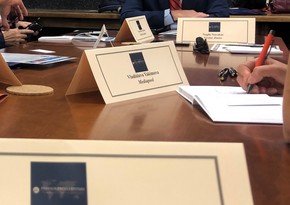 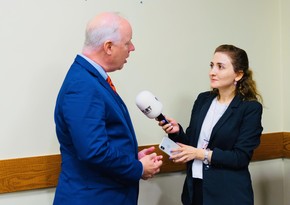 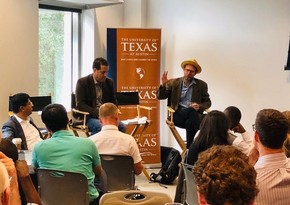 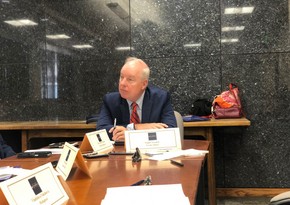