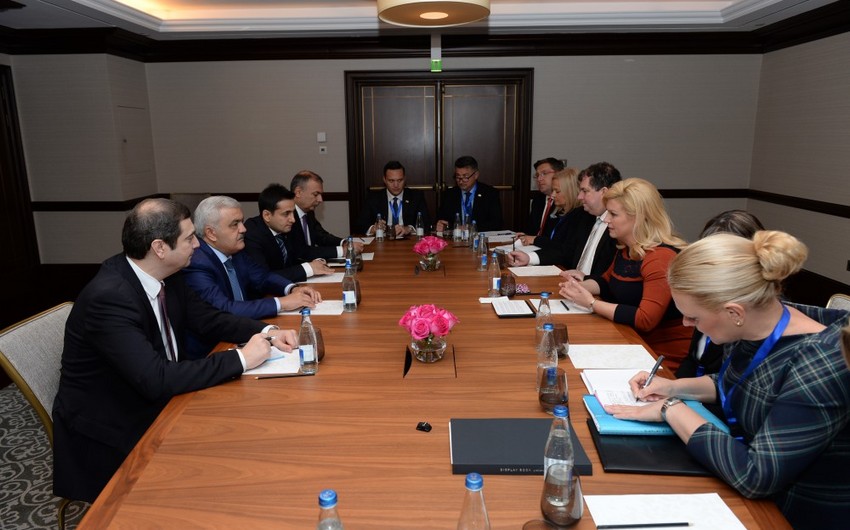 Baku. 25 October. REPORT.AZ/ The President of Croatia Ms. who is on an official visit in Azerbaijan, has met with the President of the State Oil Company of Azerbaijan (SOCAR) Rovnag Abdullayev.

Report informs referring to AZERTAC, R.Abdullayev stated that Azerbaijan significantly contributes to energy security and diversification of gas transporting infrastructure in Europe. He informed on implementation of Southern Caucasus Pipeline, TANAP and TAP projects which are different phases of Southern Gas Corridor to deliver Azerbaijani natural gas to Europe.

R.Abdullayev stated importance of Memorandum of Understanding (MoU) signed between SOCAR and governments of Croatia, Albania, Bosnia and Herzegovina and Montenegro on construction of Ionian-Adriatic Pipeline (IAN) for energy security of the region and diversification of import channels.

Croatian president also stressed importance of IAN gas pipe-line project initiated by her country for energy security of Europe and Balkans in particular.

stated that Croatia is looking forward to completion of Southern Caucasus Pipeline, TANAP and TAP projects and connection of IAN to this network for transportation of Azerbaijani gas to Balkans countries.

The sides exchanged views on projects of mutual interest.