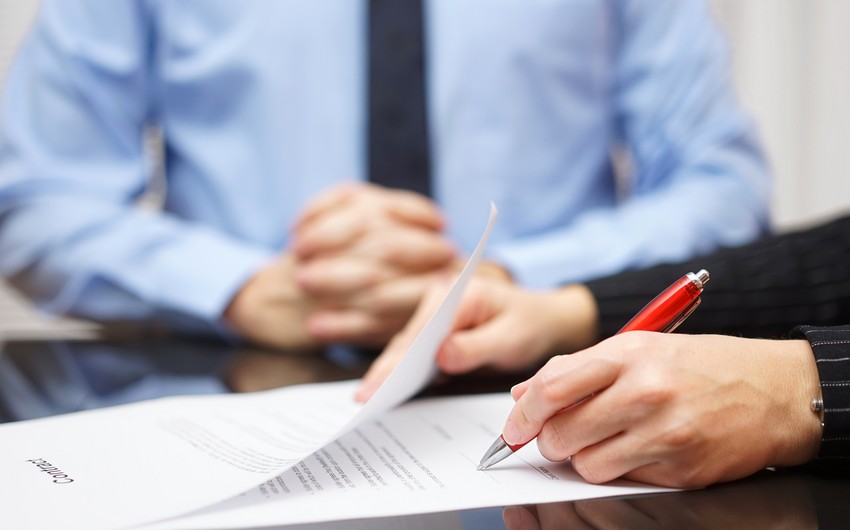 Baku. 22 December. REPORT.AZ/ In order to support the development of "Shah Deniz" gas condensate field, credit and guarantee agreements were signed today with a guarantee of Azerbaijani state, as well as guarantee of the Asian Development Bank (ADB) on allocation of syndicated loan of $ 524.5 mln to the "Southern Gas Corridor" CJSC.

Report informs, on behalf of the Azerbaijani state, the guarantee agreement was signed by Finance Minister Samir Sharifov, while the loan contract inked by Director General of "Southern Gas Corridor" CJSC Afgan Isayev.

Afgan Isayev said that the SGC project will ensure long-term, successful and sustainable development of Azerbaijan, and informed about works done in this direction. He noted that the Southern Gas Corridor project was supported by the leading international financial institutions such as the International Bank for Reconstruction and Development (IBRD), Asian Infrastructure Investment Bank (AIIB), European Bank for Reconstruction and Development (EBRD) and Asian Development Bank (ADB, through direct loan).

$ 8.4 bln or approximately 73% of about $ 11.5 bln has been allocated so far, which is totally required by the company for the Southern Gas Corridor project (including current "Shah Deniz Stage 1" and South Caucasus Pipeline projects) until 2020 (inclusive). $ 2.3 billion of this amount was invested from early current year till now. As a part of the project, 98.5% of works has been carried out on development of "Shah Deniz Stage 2" gas-condensate field operation (on first gas production), 99.2% of works on transportation of first gas on South Caucasus Pipeline Expansion (SCPX), 87.4% of works on construction of TANAP, 60,8% on Trans Adriatic Pipeline (TAP) construction. Construction works continue successfully", he added.

Notably, main purpose of the Southern Gas Corridor project is to develop "Shah Deniz Stage 2" gas condensate field operation, to ensure export of natural gas produced, to Turkey and South Europe through the South Caucasus Pipeline to be expanded, newly to be built TANAP and TAP.

Notably, "Southern Gas Corridor" CJSC is a closed joint-stock company, which established under order of Azerbaijani President "On some measures regarding the second stage of Shah Deniz gas and condensate field operation and other projects on the establishment of the Southern Gas Corridor", dated February 25, 2014 and which 51% of state-owned shares belongs to the Ministry of Economy, 49% to SOCAR.

Notably in May, ADB has allocated direct loan of $ 500 million for 15 years on the basis of state guarantee.