​Rally to support Azerbaijani army was held at BHOS Baku. 6 April. REPORT.AZ/ BHOS students demonstrating the high morale organized the rally in order to support the valiant army of Azerbaijan, which starting from April 1 had been hitting adverse positions at the frontline. Guided by the spirit of patriotism BHOS students sang Soldier’s Marchand hoisted three colored national flag of Azerbaijan to give support to all Azerbaijani soldiers fighting in the name of liberation of Garabakh, Report was told in the press service of Baku Higher Oil School (BHOS).

BHOS rector Elmar Gasimov who joined the above said meeting congratulated Azerbaijani nation on the fact that Azerbaijani army crushingly hit Armenian military forces in response to the firing Azerbaijani villages, inhabited areas, military positions by the latter. The liberation of several summits from occupants by Azerbaijani army was stated with the feeling of pride. BHOS rector pointed out that as the result of the policy initially launched by the National Leader of Azerbaijan Haydar Aliyev and successfully continued by the President of Azerbaijan Republic, Supreme Commander-in-Chief Ilham Aliyev our strong army is heading Azerbaijan to the victory.

Elmar Gasimov also stressed that Armenia neglecting repeated warnings of the international organizations resorted to provocations however these acts were prevented by Azerbaijani army. BHOS rector expressed the confidence that all the world knew about rightfulness of Azerbaijani position. He said he was convinced on Garabakh’s liberation from occupants and the hoisting of Azerbaijani flag there. Mentioning the victims of the conflict Elmar Gasimov said that all nation should be united in the name of victims and under the leadership of Supreme Commander-in-Chief Ilham Aliyev.

BHOS vice rector on training, science and international relations Ramiz Humbatov emphasized the readiness of Azerbaijani nation to liberate all occupied territories of Azerbaijan and that it would be possible owing to the successful policy of President of Azerbaijan Republic, Supreme Commander-in-Chief Ilham Aliyev.

The rally terminated by singing of the National anthem of Azerbaijan and shouting out slogans on readiness to liberate occupied Azerbaijani territories under the leadership of Supreme Commander-in-Chief. 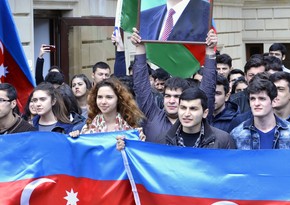 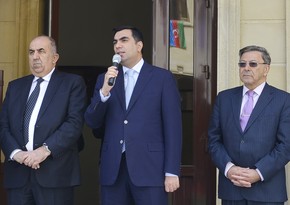