Baku. 26 January. REPORT.AZ/ Rector of Baku Higher Oil School (BHOS) visited the Socialist Republic of Vietnam on a delegation of Azerbaijan to participate in the first meeting of the Azerbaijan-Vietnam Intergovernmental Commission on economic, trade, scientific and technical cooperation, which was held in Hanoi. Report was informed in the BHOS press service, the Azerbaijani delegation was led by Azerbaijani Energy Minister Natig Aliyev who is also a co-chair of the Intergovernmental Commission.

Following the results of the meeting at the Ministry of Industry and Trade of Vietnam, the co-chairs of the Intergovernmental Commission signed a Protocol of the first meeting. In the Protocol chapter Concerning Education, special consideration was paid to study of Vietnamese students at BHOS as well as to arrangement of Doctoral programs, training, refresher and postgraduate courses for representatives of academic institutions and production companies at the Higher School.

In the course of the trip, the Azerbaijani delegation met with Vietnamese Minister of Industry and Trade, the co-chair of the Intergovernmental Commission Tran Tuan Anh and representatives of the Vietnam National Oil and Gas Group (PVN). During the visit, BHOS Rector Elmar Gasimov met with a chief, General Manager of the Science and Strategy Department, and Economic Studies Management Assistant of the Vietnam Petroleum Institute. He told about perspectives of Vietnamese students’ study at the Higher School and provided detailed information about infrastructure and conditions created for students’ education and social and cultural development at the BHOS’ new campus. Rector Elmar Gasimov also met with General Manager of the International Relations department of the Ministry of Science and Education of Vietnam and told him about prospects of education of Vietnamese students and specialists at BHOS. At the meeting, an agreement on taking further steps in this direction was reached.

The Azerbaijani delegation was received by the President of the Socialist Republic of Vietnam Tran Dai Quang. At the reception, issues related to development of bilateral cooperation between two countries were discussed. 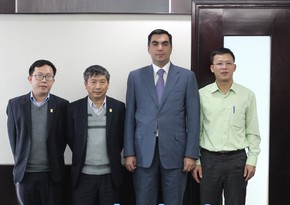