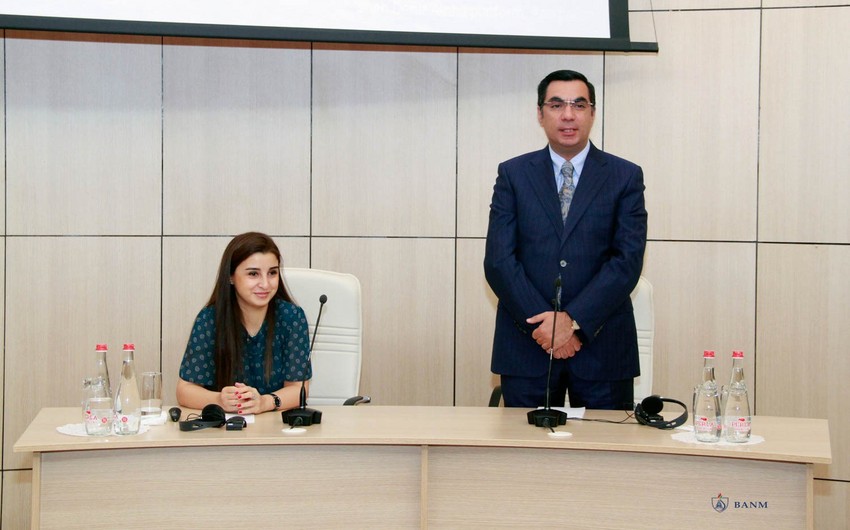 An international conference dedicated to the 25th anniversary of the “Contract of the Century” was held at the Baku Higher Oil School (BHOS).

The event was attended by more than 50 delegates from Italy, Great Britain, France, Germany, Spain, Switzerland, Belgium, Romania and Kazakhstan.

Opening the conference, Rector of Baku Higher Oil School Elmar Gasimov informed the gathering in detail about the goals of the "Contract of the Century", the successes and prospects of the oil strategy.

ElmarGasimov said that the oil strategy constitutes the basis of political and economic reforms initiated by nationwide leader to turn independent Azerbaijan into a modern, strong state with sustainable economic development.

He noted that on September 20, 1994, under the leadership of national leader Heydar Aliyev, one of the landmark agreements in Azerbaijan’s 20th-century history was signed -the Agreement on the Joint Development and Production Sharing for the Azeri and Chirag Fields and the Deep Water Portion of the Gunashli Field in the Azerbaijan Sector of the .

The agreement provided a basis for Azerbaijan’s oil strategy and opened up new prospects for the future of the country.

“11 major international companies representing 7 countries of the world (Azerbaijan, the USA, Great Britain, Russia, Turkey, Norway and Saudi Arabia) participated in the ‘Contract of the Century’.If we look back at history, we will see that when Azerbaijan was part of the Russian and Soviet empires for about 200 years, it could not use its own resources.After our country gained independence in the conditions of a tense political situation, high intelligence, skills and authority were required for signing major oil contracts and attracting foreign investments in the country. It was as a result of the tireless work done by Heydar Aliyev that the process of introduction of modern technologies into the oil industry, integration with the West and transformation of oil capital into human capital was launched.Thus, in subsequent years, oil production increased and Western companies began operating in the Caucasus at the initiative of Azerbaijan.

I would also like to note that if previously the majority of employees of multinational companies were foreigners, now, thanks to the set requirements and implemented reforms, 90 percent of them are local specialists.It is safe to say that a new era of transforming Azerbaijan into an energy corridor of global significance has begun on the initiative and under the leadership of President of the Republic of Azerbaijan .Commissioning of Baku-Tbilisi-Ceyhan and Baku-Supsamain oil export pipelines, development of giant Azeri-Chirag-Guneshli block of oil and gas fields, commissioning of Star Oil Refinery in Izmir in Turkey are only part of the large-scale works carried out in this direction,”Elmar Gasimov added.

Speaking at the event, the head of BP’s External Relations Department, Gunesh Aliyeva, provided information on the activities and achievements of the company she represented.

She said that at the time when the situation in the country was unstable, BP was one of the companies investing in Azerbaijan.

Gunesh Aliyeva stressed that according to the joint contract signed last year, the company will continue operating in Azerbaijan until 2050.

“In 1992, the company began operating in the local oil industry as a small group. Over the past period, human capital and the use of modern technology have been two important keys to success for the company I represent. BP is not only involved in the export of oil and gas. Social activities, development of human skills and environmental protection are also part of the company’s activity,” she added.

Towards the end of the conference, foreign guests received answers to their questions.