New BHOS campus hosts a ceremony marking the Knowledge Day At the end, first-year students were presented with their student cards
134 Baku. 15 September. REPORT.AZ/ Baku Higher Oil School () hosted a ceremonial event dedicated to beginning of the new academic year and celebration of the Day of Knowledge on September 15.

Report was informed in the BHOS press service

The ceremony gathered SOCAR President and Deputy of Milli Majlis of Azerbaijan Rovnag Abdullayev, BP Regional President for Azerbaijan, Georgia and Turkey Gary Jones, First Vice President of SOCAR Khoshbakht Yusifzade, the company Vice presidents, and Deputy Head of office, Head of Science and Higher Education Department of the Ministry of Education of Azerbaijan Yagub Piriyev. Top managers of a number of national and international companies operating in the country as well as BHOS teachers, professors, students and their parents also attended the event.

Before beginning of the event, the participants laid flowers to the bust of the National Leader Heydar Aliyev at the BHOS building to honor the memory of the great leader. The event started with playing the National Anthem of Azerbaijan Republic. In his opening address, BHOS Rector Elmar Gasimov welcomed the guests and participants of the event, congratulated all attendees on this remarkable day and extended his special congratulations and best wishes to first-year students and their parents.

The Rector reported that out of those 25 students who showed the highest score in the entrance exams for 2017/2018 academic year in 1st group of specialities and were granted with the presidential scholarship by a decree of the President of the Azerbaijan Republic Ilham Aliyev, 24 persons chose to study at BHOS. He informed that the minimum passing score for admission to Process Automation Engineering department was 685 points and it already became record high in the country. The minimum passing scores for admission to Petroleum Engineering and Chemical Engineering departments were 663 and 662 points respectively. Elmar Gasimov emphasized that all seven prospective students earning the higher possible score at the entrance exams in 1st group of specialities, which was 700 points, chose to study at BHOS.

“Many of our first 102 graduates already started to work at SOCAR, SOCAR AQŞ, SOCAR Polymer, SOCAR Upstream, and PETKIMand STARin Turkey, as well as at transnational companiesincluding BP, Maire Tecnimont Group and Halliburton. Other graduates were admitted to pursue either Master or Ph.D. degree at various well-recognized universities abroad including Hamburg-Harburg Technical University in Germany, Stanford University in the USA, Friedrich-Alexander University Erlangen-Nürnberg in Germany, and Colorado School of Mines in the USA,” said Elmar Gasimov.

Speaking at the ceremony, SOCAR President and Deputy of Milli Majlis of Azerbaijan Rovnag Abdullayev extended his congratulations to BHOS teachers, professors, staff members, students and their parents on beginning of the new academic year. I believe that study at the Higher School will help young people become highly trained engineers with good command of English who are capable to make significant contribution to the development of energy sector of the country, he said.

Rovnag Abdullayev reminded that opening of a new campus of the Higher School with participation of the President of the Azerbaijan Republic Ilham Aliyev took place on May 1, 2017. In his inauguration speech, the President Ilham Aliyev highly appraised the BHOS successful activity and the new campus, the biggest in the region. Rovnag Abdullayev also emphasized that achievements of the Higher School are a vivid evidence that implementation of the appeal of the President Ilham Aliyev to transform oil capital into human capital remains a priority for SOCAR.

Addressing the ceremony participants, BP Regional President for Azerbaijan, Georgia and Turkey Gary Jones expressed his satisfaction with the long-term and fruitful cooperation between BP and the Higher School. In his words, this partnership is aimed to support BHOS activities on training highly qualified engineers who can contribute to economic development of Azerbaijan.

Speaking at the ceremony, SOCAR First Vice President Khoshbakht Yusifzade congratulated BHOS undergraduates on the beginning of the new academic year and wished them successful study and professional career in the future. I am confident that BHOS graduates will become excellent engineers and the best national specialists, he told.

Deputy Head of office, Head of Science and Higher Education Department of the Ministry of Education of Azerbaijan Yagub Piriyev extended his congratulations to the ceremony participants on the occasion of the Day of Knowledge. He emphasized that first-year students admitted to the Higher School this year are the most talented young people who showed exceptionally high score at the entrance exams for 2017/2018 academic year.

On behalf of all BHOS students, Akhmed Gelenderli who graduated from the Higher School with a Bachelor degree in Chemical Engineering extended sincere gratitude to the President of the Azerbaijan Republic, top management of SOCAR and BHOS, and teachers of the Higher School. He wished all first-year students to become good students and professionals. Then he presented SOCAR President Rovnag Abdullayev with a memorable gift.

Speaking at the ceremony, first-year Process Automation Engineering student Mahira Asadzada who earned 700 points at entrance examinations this year emphasized that the Higher School provides all necessary conditions and opportunities for education and professional development of undergraduates. Yegane Askerova, mother of first-year Process Automation Engineering student Abdulla Askerzada who also earned the highest score at the entrance exam spoke at the event on behalf of the first-year students’ parents. As she said, she is happy for her son who became a student of the Baku Higher Oil School, which is the most prestigious higher educational institution in Azerbaijan. Yegane Askerova also thanked BHPS managers and teachers for their efforts in providing high-quality theoretical and practical training to future engineers. Headmaster of the secondary school №5 of Khirdalan town Shahin Yusifov said that he is justifiably proud of the success of the school graduate Jale Mammadova. At the entrance exams, she achieved the best possible result, earned 700 points and selected BHOS to pursue Bachelor degree in Chemical Engineering.

At the end of the ceremonial event, the first-year students admitted to BHOS in 2017/2018 academic year were presented with their student cards. 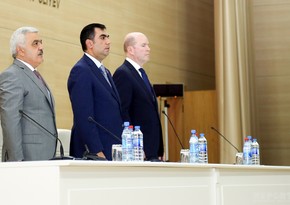 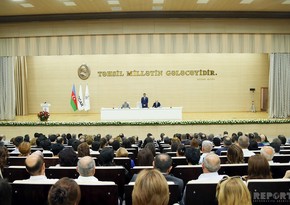 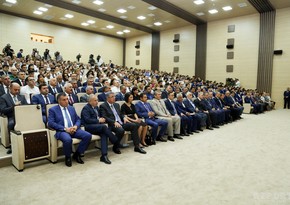 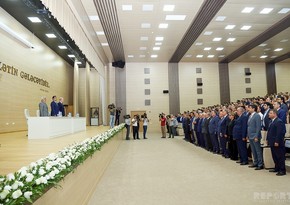 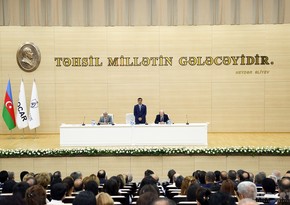 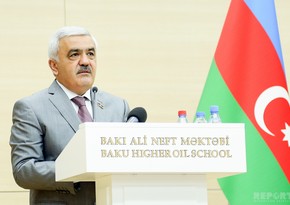 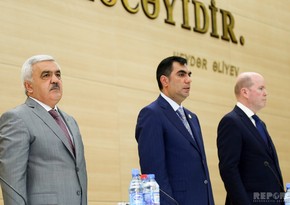 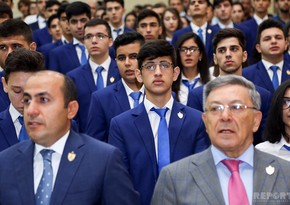 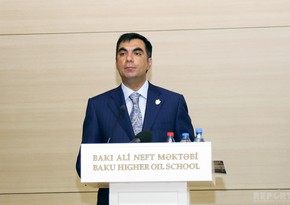 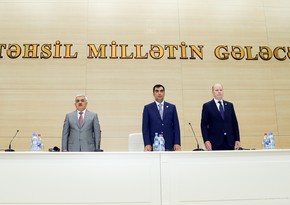 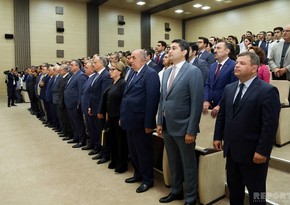