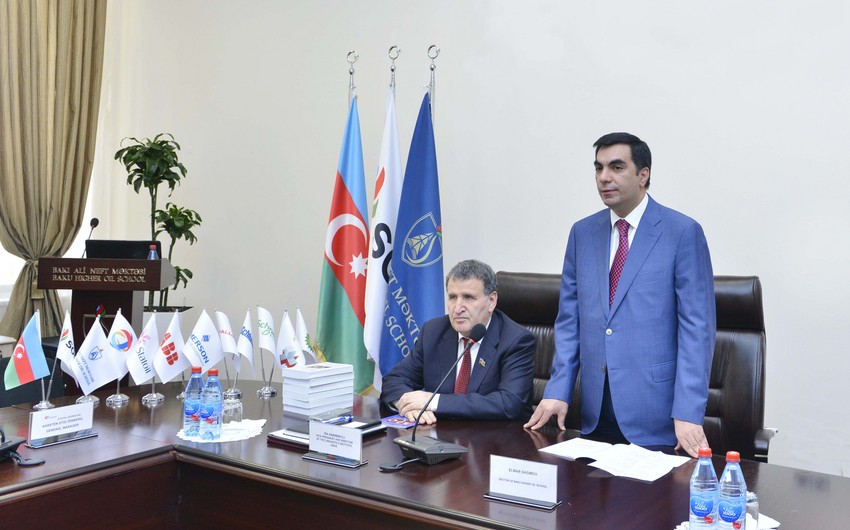 Baku. 20 April. REPORT.AZ/ On April 19-22, 2016, 4th Students’ Scientific and Technical Conference dedicated to 93rd Anniversary of the National Leader Haydar Aliyev is being held at BHOS. The conference gathers BHOS management, professors, lecturers, vice-president of National Academy of Science of Azerbaijan Republic, chair of the science and education committee of the National Parliament Isa Habibbeyli and the representatives of SOCAR and international companies functioning in Azerbaijan, Report was told in the press service of Baku Higher Oil School.

Prior to the conference participants attended the ceremony of laying a wreath on the memorial of the National Leader of Azerbaijan Haydar Aliyev at BHOS lobby.

During his speech which opened the first plenary meeting BHOS rector Elmar Gasimov stressed that dedication of the said conference to the 93rd Anniversary of the National Leader HaydarAliyev was the manifestation of profound reverence to him. Stating ensuring of the unity of science and education at BHOS rector talked about measures always taken at the higher school in order to involve students in scientific activities. Elmar Gasimov also underlined that the purpose of organization of scientific and technical conferences was to demonstrate the reverence to the National Leader, HaydarAliyev, who initiated oil strategy of our country successfully continued by the President of Azerbaijan Ilham Aliyev, ensuring students’ involvement in scientific research, development of their skills concerning presenting research outcomes and providing information exchange between them. BHOS rector Elmar Gasimov pointed out the fact that in order to involve students in scientific activities starting from 2016 BHOS organized the contest on ‘Young researcher of the year’. He was convinced that the most active participants of the said contest would continue their education on Master and PhD level as researchers and then would join the professors’ staff of BHOS.

Vice president of National Academy of Science of Azerbaijan Republic, chair of the science and education committee of the National Parliament Isa Habibbeyli congratulated BHOS management and staff members on organization of such event.

Isa Habibbeyli underlined the importance of dedication of the technical and scientific conference to 93rd anniversary of outstanding person, National Leader HaydarAliyev. He also said that the conference would contribute in students’ growth as professionals. Isa Habibbeyli pointed out the high level of realization of the unity of science and statehood ideology while educating new generation specialists at BHOS. Pointing out the presence of the representatives of international companies Isa Habibbeyli also said that the event in question would serve to establish relations between students and the companies, their future partners, and acquire professional skills. He also assured that National Academy of Science would be ready to collaborate with BHOS in terms of science development, carrying out joint activities in this direction.

Heads and representatives of companies attending the meeting thanked BHOS management for its organization. They positively evaluated the conference saying they would be pleased to contribute in training future specialists.

Seven selected lectures of students was presented during plenary meeting of the conference. In general, there will be presented 127 lectures.

Juries representing organization committee will define the participants with the most interesting lectures. During the final meeting of the Conference the winners will be granted certificates and presents, the other participants will be granted encouraging presents including the ones to be given by representatives of such companies as SOCAR, BP, Statoil, Total, Schneider Electric, Schlumberger, Emerson Process Management, ABB and Avandsis Group.