Photos of leopard cubs taken in Nakhchivan 2 of 7 leopards, observed in Nakchivan during recent years are cubs, 1 of 5 is leopardess Report informs citing the Ministry of Ecology and Natural Resources.

According to the information, the photos were taken via the camera-traps installed within the project of restorating population of leopards in cooperation with the Ministry of Ecology and Natural Resources and IDEA (International Dialogue for Environmental Action) international environmental campaign as well as the World Wildlife Fund (WWF).

The ministry said that specialists think that the process of Caucasian leopards' return to their habitats in Azerbaijan has intensified in the last 5 years: "So far, photos of new leopards were taken in the Zangezur National Park named after Hasan Aliyev in September 2012, February and March 2013, January 2014 and in November 2015 as well as Hirkan National Park in October 2012 and May 2013. Two of 7 leopards, observed in Nakchivan during recent years, are cubs, 1 of 5 is leopardess." 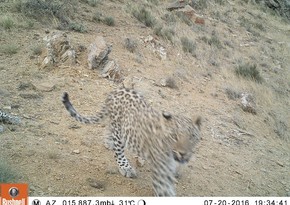