President of Azerbaijan: If there is East Zangazur, then there is also West Zangazur 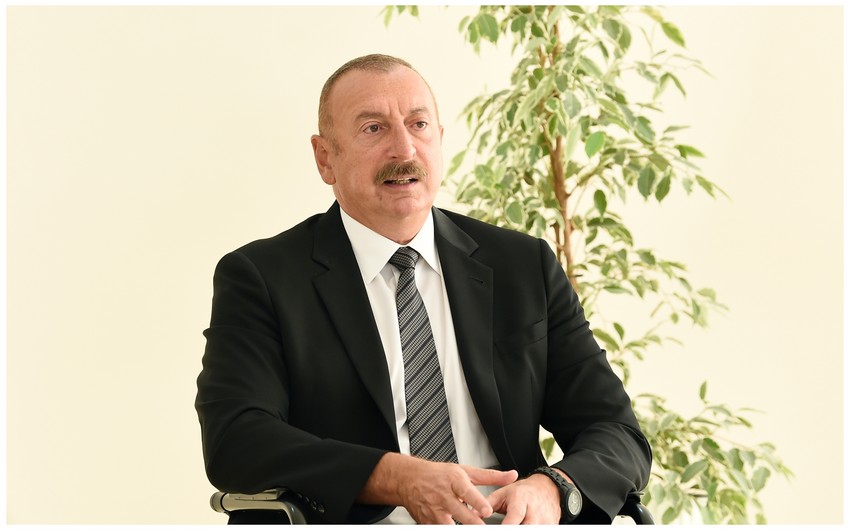 "A new era has begun now – the era of construction, the post-conflict era," President of the Republic of Azerbaijan Ilham Aliyev said while attending a ceremony to give out apartments and cars to families of martyrs and war disabled in Khojasan settlement, Binagadi district, Baku, Report informs, citing AzerTag.

"I have said this many times, and I want to say again that the Armenian-Azerbaijani Nagorno-Karabakh conflict has been resolved. This conflict has been resolved. It is us who has resolved it, the Azerbaijani state. We have resolved this unilaterally. I have been hearing this from here and there – some people begin to say that the issue must be resolved, that this conflict has not been resolved. They are on the wrong and dangerous path. If it is not resolved, let them explain to us how it should be resolved. We believe that it has been resolved and the war is over. Nevertheless, we are ready and must be ready for war at any moment. I said this in my statement on the Armed Forces Day on 26 June. We are implementing new plans for our army. However, we believe that the conflict has been resolved and we have restored our territorial integrity. We have won. We do not have any other issues on the agenda today. We have accessed our borders and taken control of the Armenian-Azerbaijani border. We have already started construction work. If someone says that the conflict is not resolved, let them come and say how they see a solution and what is not resolved. If we are talking about the status of Nagorno-Karabakh, I said that there is no territorial unit called Nagorno-Karabakh in Azerbaijan. In general, this word, this expression should not be used. There is no Nagorno-Karabakh – there is Karabakh. The Karabakh economic zone was established on the basis of a decree I signed on 7 July, and this is all. All regions of Karabakh are united into one. The East Zangazur economic zone has been established. Armenia has now raised hysteria about this issue. There is no need for that because East Zangazur is our historical land. West Zangazur is our historical land. We cannot forget history. We cannot become hostages of anyone's political interests. Let them look up historical documents and maps and see when the Soviet government tore Zangazur apart from Azerbaijan and handed it over to Armenia. This is a relatively recent date – 101 years ago. So why should we say that this didn't happen? Why? We are telling the truth. It is the land of our ancestors: the whole of Zangazur – East and West Zangazur. It is now being said in Armenia that Ilham Aliyev is making territorial claims. If there is East Zangazur, then there is also West Zangazur. Yes, West Zangazur is our ancestral land. I said that we have to go back there. I said this ten years ago. All my speeches are available in the media. I said that it is the land of our ancestors, that we must return there, we will return, and we are already returning there. No one can stop us. We will definitely return because there is no other way," the head of state said.