Azerbaijani leader: Road will be opened from Zangilan to Nakhchivan, and from there to Turkey, Europe

Azerbaijani leader: Road will be opened from Zangilan to Nakhchivan, and from there to Turkey, Europe Work is already underway in the areas of tourism, agriculture, transport, logistics, environmental protection, and, of course, the creation of suitable conditions for people 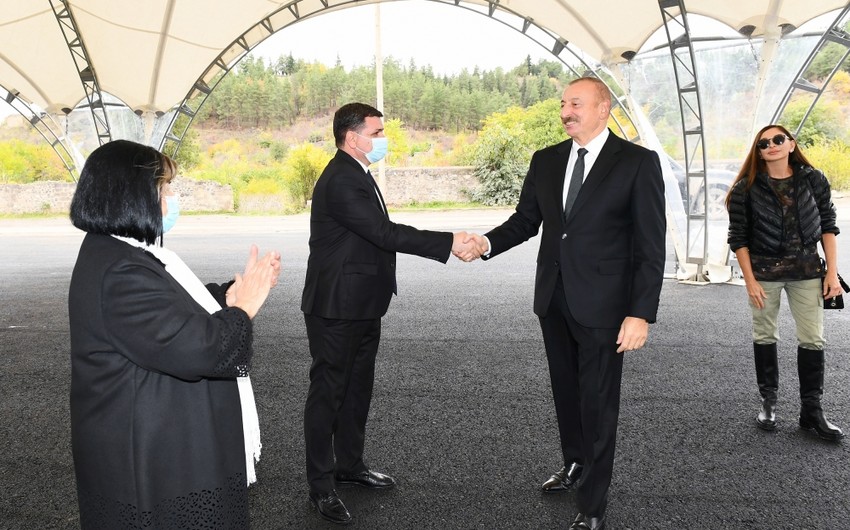 "Work is already underway in the areas of tourism, agriculture, transport, logistics, environmental protection, and, of course, the creation of suitable conditions for people. Aghali village is now under construction, and after the master plan of Zangilan city is approved, we will start construction work here as well. Zangilan will become a modern and important region of the country. I have no doubt that we will do this together with you and your advice will be appreciated. Because after the presentation of the master plan, the people should also express their opinion. Because you – the people who lived here – know exactly what was here before. Seeing this destruction, you probably remember what these places were like before," President of Azerbaijan Ilham Aliyev said at a meeting with representatives of the general public of the Zangilan district on October 20.

The conversation between the head of state and residents continued:

Resident: Mr. President, it would be a sin if I didn't remember that. There was a sizeable Minjivan station in our Zangilan district. Various trains would come here in Soviet times – Baku-Gafan, Baku-Norashen, Baku-Minjivan. Those trains were our dreams. The people of these places planned their schedules in accordance with the schedule of those trains. You are now opening the railways of Azerbaijan to Zangazur and the world. Great trains will start coming to these places soon. These trains will connect Azerbaijan with the world. This shows your great resolve and determination.

President Ilham Aliyev: When I first came here, I went to Minjivan, where I addressed the people of Azerbaijan from the former railway station. Almost everything was destroyed there. There is nothing left of it. They took the rail track away a long time ago and built anti-tank fortifications from those rails. The station building was also completely destroyed.

Resident: Mr. President, Mehriban khanim and you have visited every inch of the villages of Azerbaijan, Zangazur, and Karabakh together. Most importantly, you know those villages, the ancient place names, you are restoring them, teaching us, and restoring historical justice. This is a significant factor. Because these are forgotten moments in our history, we must restore them. That is why we express our deep gratitude to you.

President Ilham Aliyev: Thank you very much. There will be a road from here to Nakhchivan. From there to Turkey and further to Europe.