Alimardan bey Topchubashov 's personal archive in Paris: valuable documents, historical facts - RESEARCH When reading the diary, it becomes clear how intriguing, hardworking and at the same time honest person he was
993 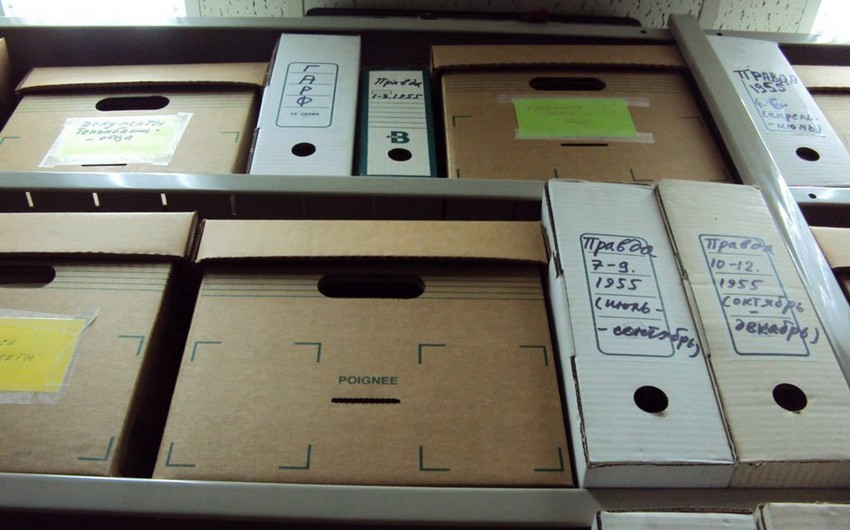 Report's Western European Bureau employee visited the Center, got acquainted with the documents and conducted research on the activity of the prominent public and political figure.

Letters to the governor

Large part of the materials include archive documents about the personal activity of Topchubashov (1863-1934). These documents also cover the period from the late 19th century to the 1918s. The documents covering A.Topchubashov's activity in Tsarist Russia as a deputy of the First Duma, as well as the editor-in-chief of "Kaspi" newspaper and other press bodies are collected here.

Materials reflecting the struggle of the prominent public and political figure in establishing local self-governance bodies in Tbilisi are among them. It is known that Topchubashov sought to establish local self-governance bodies in the South Caucasus, as well as in the federal states so that the people could determine their own fate. The archive stocks a wealth of letters addressed to the Tbilisi governor. Topchubashov’s wish became a reality after the February revolution of 1917 when local self-governance offices were established in the South Caucasus. The archive also features the diplomas of the prominent public and political figure about graduation from the high school in St. Petersburg and Tbilisi Gymnasium.

Some of the documents here cover the period from the date of arrival of the Azerbaijani delegation to France to participate in the Paris Peace Conference, i.e from May 1919 to the period of occupation of Azerbaijan by Bolshevik Russia. The archive contains the correspondence, memoirs, notes, letters to the heads of other states, public and political figures. These documents are official or semi-formal.

Relationships with migrants from Azerbaijan and other nations

After the end of the independence of the Azerbaijan Democratic Republic by Bolshevik Russia Alimardan bey Topchubashov takes control over Azerbaijani emigrants and tries to play a role of coordinator for them.

Correspondence with the immigrants and refugee organizations is preserved in the archive. These documents cover the period from the occupation of Azerbaijan by Bolshevik Russia on April 28, 1920, to the death of Alimardan bey Topchubashov, that is until November 1934. The correspondence features the relations between the Azerbaijani refugees living in France and Turkey as well as with other organizations for immigrants.

There are the correspondences with the chairman of the National Council of Azerbaijan Democratic Republic Mahammad Amin Rasulzade, Minister of Justice and Internal Affairs Khalil bey Khasmammadov, the general-governor of Karabakh, military minister Khosrov bey Sultanov.

Archive documents show that Alimardan bey Topchubashov was able to establish good relations with immigrants from other nations. The main purpose of the Prometheus movement was to help non-Russian peoples in liberation from Russian occupation and to co-ordinate their activities in this struggle. Documents related to this are important in the archive. Thus, the National Center of Azerbaijan operated within Polish-funded movement and its first head was Alimardan bey Topchubashov.

When the Caucasian nations struggled to win the right to rule themselves in the late 19th and early 20th centuries, Poland in turn, was trying to achieve full independence. After a long struggle, Poland gained its independence. However, it knew very well that to strengthen its independence it had to support the struggle of other peoples under control of Russia for freedom. Since Poland was interested in the creation of a new state on the border with Russia it supported Ukrainians. In general, Poland implemented major projects to support emigrants who continue to fight against Bolsheviks. Since Azerbaijan was also a wealthy republic, it occupied a special place in these projects. Thus, the Baku oil met 90 percent of Russia’s oil demand.

The name Prometheus given to this movement was symbolic. Thus, according to a legend, Prometheus, who was accused of giving flame to people exiled to the Caucasus Mountains. The struggle for his release at that period was likened to the fight for the freedom of the Caucasian peoples. The movement was also publishing the magazine “La Defense de Caucasse”.

But the activity for the unification of the Caucasus was not organized. That is why the Caucasian countries could not maintain their independence. Those who hindered it were mainly Armenian separatists. Unlike them, Alimardan bey Topchubashov had no problems with Georgians in this issue. He even managed to establish good relations with immigrants from the North Caucasus.

He left France only once

Turkish government fearing problems from Alimardan bey Topchubashov did not allow him to come to Istanbul. It is also evident from the archived documents that Alimardan bey Topchubashov left the country only once during his stay as a refugee in France. So he went to Switzerland to attend a Conference of Lausanne in 1923. Moreover, he planned to visit several countries, as well as Poland but failed.

Most of the documents reflecting the activities of Alimardan bey Topchubashov in his archives and his previous years before his arrival in France can be explained in several ways. It seems that the huge amount of documents during this visit of the public and political figure to Paris created a feeling that he thought this would be a long-term visit.

As is known, even though the Azerbaijani delegation came to participate in the Paris Peace Conference it had to represent the country not only in France, but also in all European countries. For this purpose, they travelled to Switzerland, England, and had connections with European countries officials. After the Azerbaijani delegation managed to promote the country's independence, our representative offices in these countries had to be established and Alimardan bey Topchubashov had to start working as an ambassador. That was the main reason why he had brought so many documents with him to Paris.

He wrote dozens of letters a day

After getting acquainted with documents in the archive, one cannot but be surprised by the energy and special work skills of Alimardan bey Topchubashov. At first glance, it is difficult to believe that a person could write so many documents. He was preparing dozens of documents in a day, especially by hand.

When reading the diary of Topchubashov, it becomes clear how intriguing person he was. He pointed every detail of the day, from the big event to the very smallest detail in the first look. These writings show that the public and political figure was capable, hardworking and very honest.

He always put his family above all

He was a loving family head and loyal spouse. Alimardan bey Topchubashov lived in Saint-Claude with his family, daughter and son-in- law in a rented house. In 1931, the public and political figure, who faced financial difficulties, was forced to leave his home by a court order. At that time, Jeyhun Hajibeyli provided them with a temporary shelter at home and helped to find a new home. However, as their new home was small, the daughter and son-in-law could not live with them. Topchubashev was disappointed with this fact. When he was forced to move from his home in Saint-Claude, he tried to rebuild his archive of things of great importance. He made notes on this issue. He also wrote that he had appealed to the relevant authorities to get his documents back. However, Topchubashov had to pay his debts to return his belongings.

The last part of the archive covers the period from November 1934, i.e from the date of Topchubashov’s death to the 1950s. The archive includes many interesting documents about the life and activity of Alakbar bey Topchubashov, the son of Alimardan bey Topchubashov, who graduated from the French National Institute of Oriental Languages and Civilizations (INALCO).

In 1975, the first secretary of the Central Committee of the Communist Party of Azerbaijan, national leader Heydar Aliyev sent Hasan Hasanov, the responsible employee of the Construction Department at the Central Committee to Paris within the Soviet delegation to meet with Akadbar bey Topchubashov, son of Alimardan Bay and instructed to invite Topchubashov to Baku on behalf of the country's leadership. The visit took place later.