Congress of Poltava Azerbaijanis gathers in anticipation of Solidarity Day The Congress of Azerbaijanis in Ukraine's Poltava Oblast has met in anticipation of the Solidarity Day of World Azerbaijanis, Report informs.

Congress members gathered in Poltava city to discuss the year's results and plans for the upcoming year.

The meeting attendees commemorated the souls of Azerbaijanis killed in the 44-day Second Karabakh War with a minute of silence.

Chairman of the Congress of Azerbaijanis of Poltava, Doctor of Economics, Academician Khanlar Mahmudov noted the further development of the Congress and listed the commitments made and to be fulfilled.

Deputy chairpersons of the Congress Javid Ismayilov, Sahraddin Mamishov, members Nasimi Babayev, Nariman Mustafayev, and others, made proposals. After the meeting, a New Year party was organized for Azerbaijanis living in the region. During the event, Javanshir Mustafayev, a member of Congress and an Azerbaijani service member, a holder of various orders and medals for his excellence in the fighting in eastern Ukraine, was awarded an honorary diploma. Membership cards were then distributed to new members of Congress. 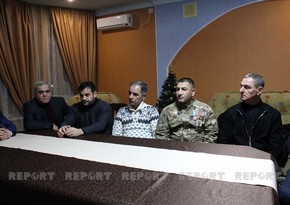