Postage stamps dedicated to Azerbaijani composer Uzeyir Hajibeyli and singer Rashid Behbudov issued in the U.S. The issuance of the postage stamps has been made possible with support of Azerbaijan’s Consulate General in Los Angeles
1419

The issuance of the postage stamps has been made possible with support of Azerbaijan’s Consulate General in Los Angeles.

It should be noted that this is part of a series of events undertaken by Azerbaijan’s Consulate General in Los Angeles to honor the tremendous legacy left by Uzeyir Hajibeyli and Rashid Behdbudov. Thus, on September 19, 2015 the world-famous musical comedy film “Cloth Peddler” (Arshin Mal Alan) from 1945, based on Hajibeyli’s operetta and featuring Behbudov, will premiere in Hollywood.

Moreover, Santa Monica, which is one of the most distinguished cities of California, has proclaimed September 18, 2015 to be celebrated as the “Uzeyir Hajibeyli Memorial Day” in the city. 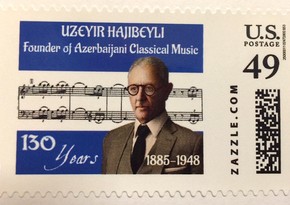 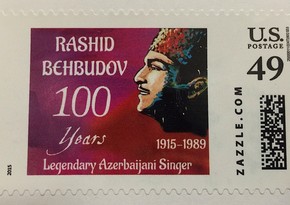