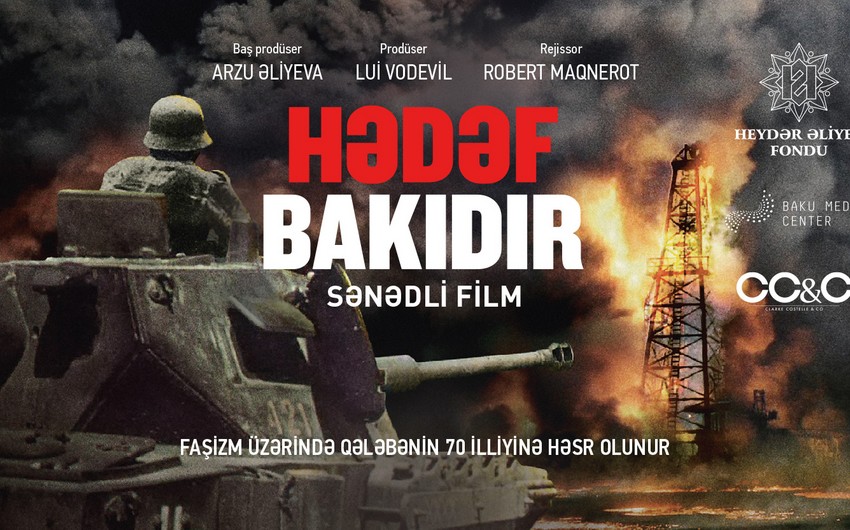 Baku. 29 April. REPORT.AZ/ On May 4, the presentation of "Objective Baku: How Hitler Lost the Battle for Oil" documentary filmed with the support of the Heydar Aliyev Foundation is to take place, Report was told by the press-service of the Fund. The initial viewing will be hosted by the Heydar Aliyev Center. The documentary dedicated to the 70th anniversary of the Victory over Nazism was produced by Arzu Aliyeva the Chief Producer, Louis Vaudeville, the Producer, and Robert Mugnerot, the Director.

In the course of the Great Patriotic War (1941-1945), 700 thousand men were drafted in Azerbaijan, 400 thousand out of them never made it back home. Meanwhile, Azerbaijan’s input to the war efforts was not only restricted to human resources. The role of the Azerbaijani oil in the Victory shall not be overseen. E.g. 72 per cent of the Soviet crude was produced in Baku. This implies that 7 out of 10 tanks or war planes were fuelled by Baku’s ‘black gold’.

The address by Arzu Aliyeva, the documentary’s Chief Producer, reads: “The 70thanniversary of the Victory over Nazism is to be celebrated on May 9, 2015. If not for the Baku oil, the Victory of the Soviet Union would have been at serious peril.”

According to Arzu Aliyeva, Objective Baku documentary pursues the goal to convey the message of Azerbaijan’s heroic history to the world, as well as to the country’s youth.

“On the other hand, this is the homage to the Azerbaijani population suffering the grievous impact of the war and forging the hard-earned Victory both at the frontline and in the rear.” – the Chief Producer concluded.

The documentary is the joint product by the Baku Media Center and the Clarke Costelle & Co. production company recognized for its documentaries.

It should also be noted that another documentary produced by Clarke Costelle & Co., Apocalypse: The Second World War, aired in 171 countries gathered the total audience exceeding 1 billion viewers.

Objective Baku took 14 months of substantial reseach in Azerbaijan, Germany, the US, the UK, France and Russia, with over 200 hours of videomaterials, photographs and other documents scrutinized.

The film provides a totally new approach to the history of World War II, i.e. through the prism of oil. The documentary also features some unique video snapshots of the WW2 battles never shown to this day in a totally new format of restored color film.

Along with the Azerbaijani version, the Russian, English, French, German and Italian versions of the documentary are available.

After the presentation at the Heydar Aliyev Center, the film is to be broadcast at the National Geographic channel in 26 countries on May 8, 9 and 10.