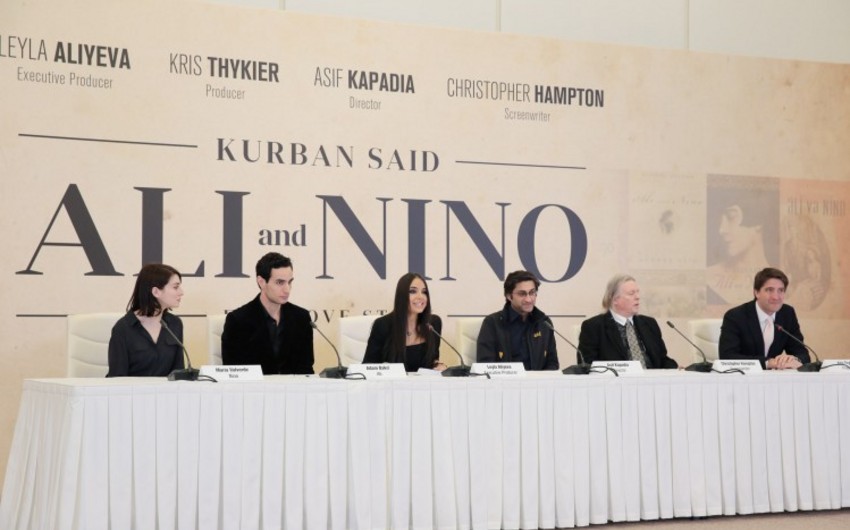 Baku.23 February.REPORT.AZ/ The shooting of the film “Ali and Nino”, based on the novel of the same name, the world's bestseller, will start on February 24. In this regard, the press conference with the creative staff of the film was held in Heydar Aliyev Centre. Vice-President of the Heydar Aliyev Foundation, the film's executive producer Leyla Aliyeva attended the conference.

Speaking at the conference, Leyla Aliyeva emphasized that the preparatory work for the shooting of the film has completed.

Leyla Aliyeva said, "I have read “Ali and Nino” many, many times and clearly remember the excitement with which I read it for the first time. Set in the early 20th century, the book vividly describes the people, places, sights and sounds of Azerbaijan at that time. It brings alive an epic love story that continues to resonate today, 100 years later. That is why I am so excited that the filming of this novel will take place on the streets of Baku today, in the Old City, at our Opera House, in Gobustan, and in the mountains of Khiniliq - places where the book was originally dreamed up and where its scenes were first set. I am so delighted to welcome this incredibly talented cast and crew to Baku, who are going to help us bring this remarkable story to life and wish them every success in the days ahead."

Producer Kris Thykier commented:” I am thrilled to announce the start of principal photography on Ali & Nino, it has been an honor to work with Christopher on adapting this wonderful novel, and the film could not be in better hands than with Asif and the amazing cast and crew that he has gathered together.”

Kris Thykier expressed his gratitude to the Heydar Aliyev Foundation and vice-president Leyla Aliyeva and for supporting the implementation of the project.

“There is best screenplay, international level team, nice places and strong shooting staff. This project has been the source of our eternal friendship.”

The script writer of the film, winner of Academy Award Christopher Hampton said: “I was not familiar with this novel before Kris sent me this book. It was a very interesting work for me. Of course, there are difficult issues and I agreed to this complexity. ”

Leyla Aliyeva noted that the film will emphasize the importance of struggling for our country, and the same time, viewers will be watching a love story: “Why this particular book? I think this book first and foremost reflects the importance of Azerbaijan’s independence. The second reason is, without doubt, that it’s a magnificent, epic love story”.

The epic love story Ali & Nino by Kurban Said, is one of the most original works of Twentieth Century literature. Since its initial publication in 1937, the acclaimed novel has been translated into 33 languages worldwide with nearly 100 reprints.

The film has brought together a world-class team including Production Designer, Carlos Conti (On the Road, The Kite Runner, The Motorcycle Diaries); Director of Photography, Gökhan Tiryaki (Winter Sleep, Once Upon a Time in Anatolia); acclaimed Costume Designer, Michele Clapton (‘Game of Thrones’); and Editor, Alexander Berner (Jupiter Ascending, Cloud Atlas, The Debt).

International sales of the film have been assigned to "IM Global".