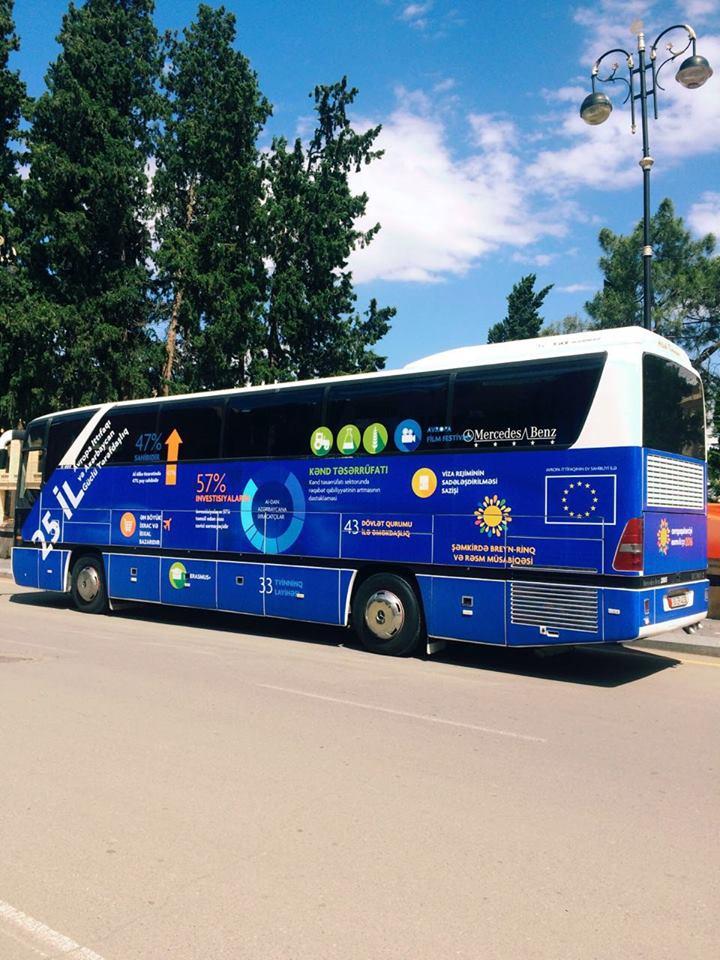 Baku. 9 June. REPORT.AZ/ The Delegation of the European Union and its Member-States, Executive Powers of Shamkir and Ganja launched of the EU Bus tour that coincides with the 25th anniversary of the EU-Azerbaijan relations. The Bus will travel to the regions of Azerbaijan to raise awareness about the EU and its activities in the country, Report informs citing the EU Delegation press-service.

For each bus stop we envisage a special programme.

"The EU Bus aims to bring experience of Europe to the Azerbaijani public. Through this we hope to increase awareness about the EU and its Member States in Azerbaijan, and foster better understanding of our rich cultures. I invite everybody to follow the EU Bus regional tour and all residents of Ganja and neighbouring regions to join us on 11 June in the EuroVillage in Ganja, which I hope will be a great day of learning, fun and entertainment", said EU Ambassador to Azerbaijan Malena Mard.

The first Bus stop will be in Shamkir on 10 June. For Shamkir we have "Mind Quest" (Brain-Ring) competition with participation of 8 teams which will compete in answering the EU related questions. We'll also conduct a drawing competition for residents of Shamkir, Ganja and neighbouring regions for 3 age categories from 7-25 years old on the topics of "Vision of Europe" and "Heroes of European Tales". The art gallery will be open to public from 16.00 at Zeka Centre (Shamkir, 17 Heydar Aliyev Ave.). Winners of both competitions will be awarded by EU Ambassador Malena Mård.

At 18.00 we will end our trip to Shamkir with a concert of organ and vocal music in German Church to be performed by the distinguished and honoured opera singer Farida Mamedova (soprano) and the prize-winner of international competitions Nigar Mamedova (organ). They will perform a selection of masterpieces by classical composers.

On 11 June the EU Bus will make a stop in Ganja. The day will start by setting up an EU green corner in Ganja European Youth Capital Park with participation of Ambassadors of the EU and Member-States. At 15.00 we invite all Ganja residents to join us in the EuroVillage event to be held in Heydar Aliyev Park. The purpose of the event is to closely familiarize Ganja residents with national traditions and culture of the European countries. The event program will include various competitions, quizzes, karaoke, face paintings for kids and other events.

The open-air concert programme in Ganja at 19.00 will be a culmination point in our 2 days' regional tour. During the concert organized at the Heydar Aliyev Park Amphitheatre Sabina Babayeva, Azerbaijani representative in "EuroVision - 2012" and singers of "Voice Azerbaijan" contests will perform European and Azerbaijani songs.