Baku. 13 April. REPORT.AZ/ Monument to bear Buddy has been erected in Baku as a symbol of friendship between Azerbaijan and Germany. The monument erected in the city center, Nizami Street.

"We would like to contribute to the beauty of the city of Baku, so we decided to install such a monument.

The installation of such a beautiful and colorful bear in the center of the Azerbaijani capital is a symbol of our friendship", Kindsgrab said, adding that this bear cub is a symbol of Berlin.

He thanked the capital municipality and the Ministry of Culture and Tourism of the republic for assistance in installing the monument, indicating that it was "the result of our joint activity."

The diplomat noted that the bear was painted by an Azerbaijani artist who won a special contest. 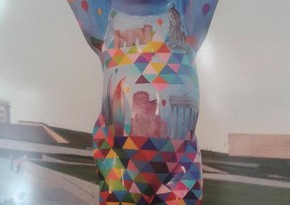