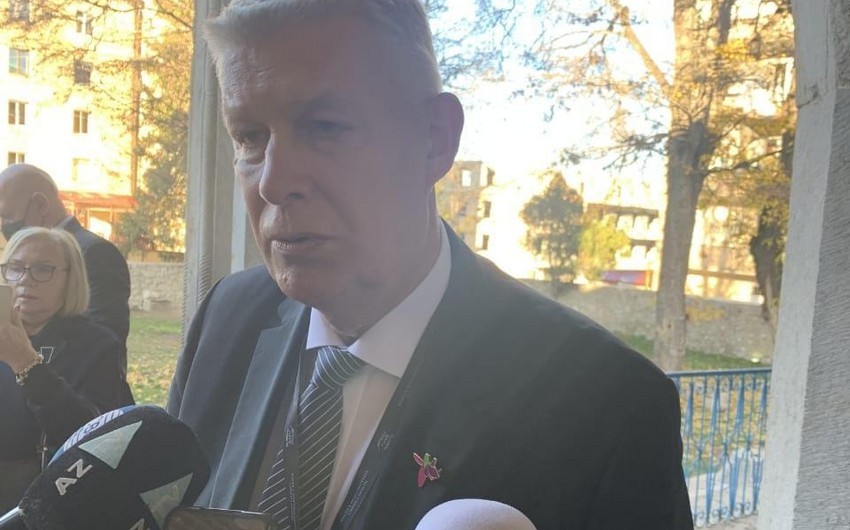 "Azerbaijan's victory in Karabakh has created a new situation in the South Caucasus region. This, in its turn, is creating new economic opportunities," former Latvian President Valdes Zatlers told Report.

In his opinion, now is the time for the regional countries to develop their economies, and it is time to realize these opportunities: “The South Caucasus is a very rich region. Earlier, due to the Karabakh conflict in the region, people thought about how to attack and defend themselves, but not about the economic development. But now the situation has changed. A sustainable economy, sustainable security will lead to the well-being of the nations. Azerbaijan's victory in Karabakh has brought about a number of benefits. First, the expression of a frozen conflict in the occupied territories is out of the agenda. The conflict was not resolved for 30 years, during which time, we used the term frozen conflict. Second, the 44-day war might be the last war in this region. I am sure it will be so. The period of permanent peace is approaching. The third point is that Azerbaijan showed leadership that means Azerbaijan would be a leader creating the post-conflict advances. It does not mean only restoring the territories and bringing back the people to the territories, it is also restoration of the relationship between all the countries and the nations in the Caucasus. Azerbaijan showed the responsibilities for the region and readiness to be a leader in creating sustainable economics, sustainable security, and building up trust between the nations. This is a very important issue. The revenge from the Armenian side is the only thing that damages the issue. But Azerbaijan is doing everything to prevent this."

The former president also spoke about the Azerbaijani-Latvian relations: “Latvia and Azerbaijan have very positive relations for many years, and we have established friendly relations in international organizations. This involves many issues. It also means successful cooperation for any sector of the economy. We are not neighbors but our political background is very good, which creates opportunities for the development of economic relations at any time. Latvia does not buy gas from Azerbaijan. However, I want to emphasize that Azerbaijan supplies gas to Europe through the Southern Gas Corridor, and we see that this event is becoming more important in Europe. The strategic partnership between Azerbaijan and the European Union is successful."

Valdes Zatlers recalled his participation in the VIII Global Baku Forum on November 4 this year: “There were very useful topics on the agenda of the forum, the quality of discussions was very high. Therefore, it is very interesting to participate in such a forum. The participation of many international organizations in the forum shows that the Nizami Ganjavi International Center has great respect from institutions. So, I think compared to the previous forum 2 years ago, this forum is a big step forward and it is very important that the forum takes place in Baku. The latest events in the past two years showed that Azerbaijan is becoming the leader of the region."

Azerbaijan has established successful economic cooperation with EU member states. Thus, in January-September this year, the trade turnover between Azerbaijan and the European Union increased by 38.4% compared to the same period last year and amounted to $9,625,000,000. Exports operations with the EU countries accounted for 54.74% of Azerbaijan's total exports. In January-September 2021, the trade turnover between Latvia and Azerbaijan increased 2.4 times to $21,972,000.