Envoy: Huge scope for diversifying India’s economic engagement with Azerbaijan The Embassy of India in Baku, in association with the Engineering Export Promotion Council (EEPC) of India has organized a Webinar followed by B2B meetings on engineering products in hybrid mode 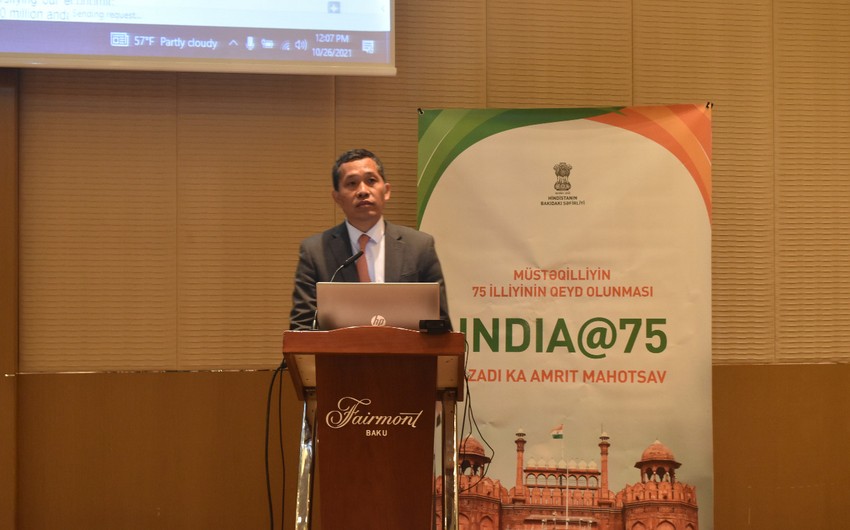 The Embassy of India in Baku, in association with the Engineering Export Promotion Council (EEPC) of India has organized a Webinar followed by B2B meetings on engineering products in hybrid mode, Report informs referring to the embassy.

The event which was part of the celebrations of 75 years of India's Independence - Azadi Ka Amrit Mahotsav, was attended by more than 40 representatives of the major companies of various engineering products in India and Azerbaijan.

The event was aimed at informing the participants about insights of Indian engineering industry. In his opening speech, Mr. Mahesh Desai, Chairman, Engineering Export Promotion Council (EEPC) touched upon the strength of Indian engineering industry and gave information bout Indian Government’s scheme in this field. He also highlighted the importance of INSTC in the coming years to increase the trade between the two friendly countries.

Speaking at the Webinar, Ambassador of India B. Vanlalvawna noted that there is a huge scope for diversifying India's economic engagement with Azerbaijan. He said that Indian engineering products are already known in the Azerbaijani market as varieties of products including reactors, boilers, pumps, valves etc. both for the oil and non-oil sectors are imported from India and used in the country. He further stated that Indian engineering sector exports goods worth over US$ 76 billion annually and there is much scope for enhancing engagement and collaboration between the two countries in this sector.

According to the Azerbaijani statistics, bilateral trade between India and Azerbaijan during January-September 2021 was US$ 610.05 million increasing 20.1%. India was 8th major trade partner of Azerbaijan during this period. Azerbaijan’s export to India was US$ 503.18 million increasing 22%. India's share in Azerbaijan's total export during the period was 3.4%, being 8th export destination for Azerbaijan. Azerbaijan’s import from India was US$ 106.87 million during January-September 2021, an increase by 12.2% as compared to the same period of last year.