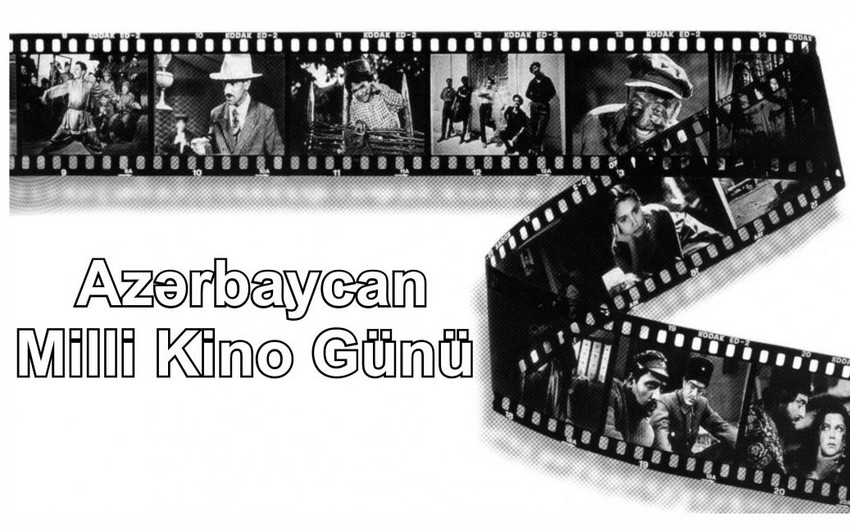 Baku. 2 August. REPORT.AZ/ Cinematography - is the combination of the Greek words "cinema" - movement and "graphy" - write, to describe, and means image in movement) appeared in France in the XIX century. In December 28, 1895 in Paris, the brothers Louis and Auguste Lumiers demonstrate small plots shot by them at apparatus invented by them, in Kaputsino Boulevard of Paris in "Grand-Café". The same date is considered the birthday of the world cinema, Report informs.

After two years since the first cinema show in France - in 1898 in Baku on June 21, in Vasil-Vyatski’s Theatre-Circus as part of the performance "People walk in Garden City", "Train into the railway station", "Baku street at morning" film-plots dedicated to Baku life were demonstrated. It was demonstrated experimentally. In the same year on August 2 Alexander Mikhailovich Mishon, publisher and photographer, secretary of scientific-photo of Baku, lived and worked in Baku for more than 25 years had arranged independent demonstrations of plots "Oil fountain fire in Bibi Heybat”, "Ceremony of seeing-of of His Majesty Emir of Bukhara", The Caucasian dance" newsreel -documentary and "You are caught" feature plots. The given plots were demonstrated at the World Exhibition in Paris in 1900 and kept there. Two of them - "Oil fountain fire in Bibi Heybat" and "Balakhani oil fountain" were returned from French film archive in 2001 to Azerbaijan. Same film plots stored in 35-mm tapes and at videocassette in film fund. As a result of this historical fact by order of President of the Republic of Azerbaijan, Heydar Aliyev dated December 18, 2000, August 2 was declared as professional holiday of cinema workers – day of Azerbaijani cinema.

In 1908, professional cameraman Grossman started to shoot plots about the life of Baku oil fields. This plot was a subject of interests of "Pate" and "Gaumont" film studios of France, and they also sent their operators to Baku. Shot films were demonstrated in cinemas of city "Record", "Mikado", "Express", "Fransuzski".

In 1915, Pirone Brothers had established in Baku "Filma" Joint Stock Company and had shot in 1916 short fiction film "Oil and country of millions" based on the same name novel of writer Ibrahim bey Musabayov and in 1917 “Arshin mal alan” based on the same name operetta of U. Hajibeyov. Director of both films was Boris Svetlov and cameraman Grigori Lemberg. They both were invited from Petersburg.

In May 1918 after declaration of the Democratic Republic of Azerbaijan the new government had implemented many cultural and political reforms. Diplomatic and cultural-economic relations with foreign world gave impetus to bringing of first samples of world cinema to Baku and new public views. As a result, the number of lovers of cinematography began to increase in Baku. In 1918, they united in “The Council of servicemen of Cinematography and Theatre". On May 28, 1919, on anniversary of the Azerbaijani Democratic Republic newsreel was shot. Unfortunately, the film, which is the first example of screen publicism did not reach our days.

In April 1920 after the Bolshevik occupation of Azerbaijan and collapse of the national government in July 4 N. Narimanov, the chairman of the Revolutionary Committee signed a decree on the nationalization of the Department of Cinematography.

In the same year "Parade of units of the XI Red Army", "Congress of the peoples of the East" and "26 Baku commissars’ burial" newsreel films were shot.

The film studio was established in Azerbaijan in 1923. The main production area film factory began to be used since 1925.

Film shot by Ababs Mirza Sharifzade in 1926 "Bismillah" was the first independent film of Azerbaijani cinematography, and Sharifzadeh was the first national film director. In 1925 in order to help to the national cinema cadres famous film directors like I.Savchenko, V. Pudovkin, A. Beknazarov, N.Shengelaya were invited to Baku.

In 1936, in film anthology “Famous Azerbaijan” of film directors V. B. Pumpyanski and V. Yeremeyev the narration was about oil worker Piri Nuriyev and cotton planter Gudrat Samedov. Thus the foundation of the first synchronous films was laid.

The first sound film of our cinema, the joint work of "Azerfilm" and "Mejrabpomfilm" called "At coasts of Blue Sea" comedy has been shot. This film shot by directors Boris Barnet and Samed Mardanov was included to list of best films of world cinema according to survey carried out by among most influential film critics of "Kinovedceskiye zametki" in connection with 100th anniversary of world cinema and also was included in the list of Bernard Ayzenshits in France and Naum Kleiman in Russia.

Second director of the film "At coasts of Blue Sea" Samed Mardanov had got training at All-Union State Cinematography Institute, at workshop of great Sergey Eisenstein and became the first high educated film director in the history of Azerbaijani cinema. The first independent film of director "Villagers" is considered as one of best samples of national cinema from the level of professionalism.

During the years of World War II, though the production of feature film get weakened, Azerbaijani camera men were always in the forward of the front. Shot of camera men S. Badalov, J. Mamedov, M. Mustafayev, A. Hasanov and others made in hot points of front, now are also used in newsreel materials demo stared on the screen. Since the beginning of the war cameramen went to Iran- South Azerbaijan in the structure of the Soviet army had shot films about the life of population, Soviet Army's military parade in Nov 7, 1942 in Tabriz, the process of democratic movements and leaders of the movement.

In 1945, film director Reza Tahmasib had shot "Arshin mal alan" (based on same name operetta of U. Hajibeyov) film. "Arshin mal alan" is the most watched Azerbaijani film to this day both domestically and outside. This film was included in the golden list of “100 most lovely films”, demonstrated for long years in Soviet screen according to the unanimous opinion of famous film specialists in opinion poll conducted on the occasion of 100th anniversary of the Russian cinema.

Week of Indian films have been held in Baku in 50-es. Seeing the flow of audience in cinema halls began to include elements of Indian films in own film. During 50-es musical comedies, melodramas with rich elements of Indian films like "Bakhtiyar” (dir. Latif Safarov, 1955), "The Meeting" (dir. T. Taghizade, 1955), "If not, then this" (1956), "Under the hot sun" (dir. Latif Safarov, 1957),"Stepmother" (dir. Habib Ismailov, 1958) had dominated. These years are period of weakening of the Azerbaijani cinema growth.

The 70-ies was remained in memory with shooting of first film–opera in Azerbaijan. In 1970, film director and composer Vladimir Gorricker had shot "Sevil" film-opera based on motives of novel of J. Jabbarly and same name opera of F. Amirov.

At the end of 70 years-80-es the fight against corruption at the state level in the Soviet Union and then reconstruction, public policy had shown itself in cinema. Films of these years ("The Investigation" (director R.Ojagov, 1979) "I want to understand" (director O.Mirqasımov, 1980), "The ill-fated love" (director Z.Abbasov 1980), "The devil in front of the eye" (director O. Mirgasimov, 1987) devoted their films mostly to social issues - social stratification, bribery, arbitrariness of officials.

Arrival of XXI century is remembered with significant reduction in the number independent film studios, distancing of private funds from. Thus, in 2000, the state gradually turned to the dominant source of finance of cinematography and had taken production under own control. The coming of new generation in the national cinema is specific feature of these years. This generation that watch closely developments taking place in the world cinema, trying to create films that may cross the national borders both visual, as well as in terms of dramatics. Movies of the last few years like short films of Asif Rustamov’s "Home", Ali Isa Jabbarov’s "Knot", full-length movies of Elchin Musaoglu’s "40th Door", Shamil Najafzade’s "Gala", Chingiz Rasulzadeh’s "Puppets" had been demonstrated in Rotterdam, Montreal, Tabriz international film festivals and gained success.

Day of the National Cinema in Azerbaijan is celebrated on August 2 of each year, due to the order of national leader of Azerbaijan Heydar Aliyev, signed on 18 December, 2000.